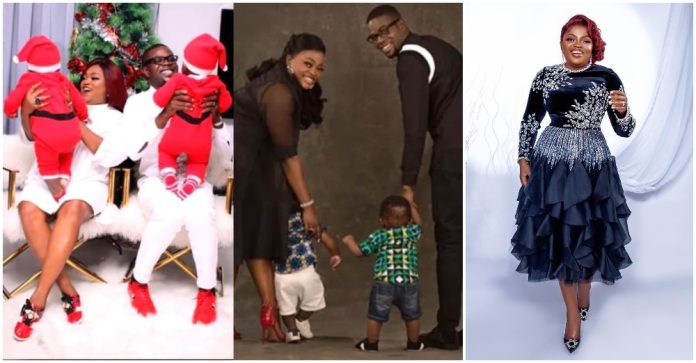 Funke Akindele-Bello is undoubtedly and undeniably one of the most popular Nigerian actresses working today. With hit series like Jenifa’s Diary, My Siblings and I, Aiyetoro Town and hit movies like the record-breaking Omo Ghetto: The Saga all coming from her production company, Sceneone Productions, it is undeniable that Funke is not only one of the most hardworking but also one of the most beloved and most successful celebrities today.

While Funke has a good online presence and has done a very good job of posting personal content and behind the scenes footage of her life, people still eagerly want to see one thing which they’ve still not seen – her children’s faces.

While it is public knowledge that Funke is a mother of twins, she’s made it a point never to showcase her children’s faces on social media. During her new interview with TVC, Funke explained why this is. Here’s what she said.

Okay, the children’s face, is that what you’re trying to say? No. When they’re old enough, they should show their face. If they want to, they should show their face. But for now, I don’t want them to show their face. I want them to have their life, enjoy it. Their dad and I are already in the public eye. They’re children don’t forget. They are children. They’re vulnerable so you have to just keep them away, keep them safe. Let them go to school, let them enjoy their life without “Ah! That’s Jenifa’s son. That’s JJC’s son. Ah see his leg, see his face.” Leave them private!

Funke was also asked to list out 3 things fans do not know about her. She said:

Three things my fan’s don’t know about me? I don’t like to go out. I love my space. I love to work so if I’m not working, I’m sleeping, I’m watching TV series, I’m playing with my children, chit-chatting with the family. I’m not really an outgoing kind of person but once in a while I try to go out.

Second thing: I don’t like to eat meat. I like to eat the bone. If you give me goat meat or chicken, it’s too fleshy. I just take small of the flesh.

Then the third one? Ha. I think they know everything oh!

We indeed know a lot and her decision to keep her children’s faces off of social media is a very understandable one because people can be something else and mistreat the children simply because of who the parents are. I understand her decision and I personally think it’s a good one.