MaDailyGistGet the Latest Gist in Town
More
GOSSIPGet Daily Gist
More
Home Celebrity/Entertainment “This story was completely made up by Caroline Danjuma, It doesn’t exist.... 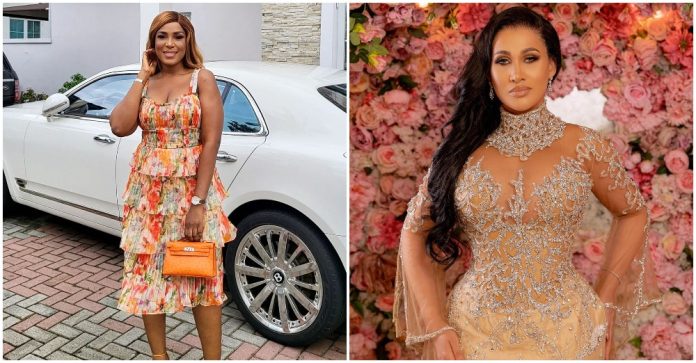 Billionaire blogger, Linda Ikeji has clamped back at actress, Caroline Danjuma Hutchins for her false reports about her being the cause of her marital break up.

We reported that Caroline Hutchins had blamed the celebrity blogger for partially wrecking her marriage with her malicious blog posts.

In a face off with Linda Ikeji’s younger sister, Laura Ikeji during the Real Housewives of Lagos reality show, Caroline spilled on how Linda Ikeji had a role in her divorce.

According to the mum of 3, Linda Ikeji was fond of writing dirts about her and no matter the countless number of times she reached out to the blogger, she always paid a deaf ear to her pleas.

Caroline claimed that Linda lied about her having her daughter for another man and also lied to her readers about her age.

She made it known that she didn’t snatch her husband from Linda Ikeji, who seemed to have been dating the billionaire.

Firing back, Linda Ikeji shared screenshots of her blog posts over the years and there was nowhere on the blog she claimed Caroline had child for another man.

Linda Ikeji admitted that she wrote about the actress’s age controversy, but apart from that, there has never been any negative reports on her.

Setting the record straight, Linda Ikeji pointed out how Caroline Hutchins always blames people for the demise of her marriage.

Linda Ikeji noted how Caroline Hutchins admitted on Instagram this year that she blamed herself for the end of her marriage.

Linda Ikeji also added that she bears no grudge against Caroline as she doesn’t know her.

If this was a story written by Linda Ikeji Blog, a lot of other blogs would have carried it. There is no such story online on the thousands of blogs that exist in Nigeria. This is a story that was NEVER written about Caroline Danjuma. It doesn’t exist. PERIOD. Fell free to Google. This story was completely made up by Caroline Danjuma. Or she could have seen it as a comment made by anonymous commenters on LIB or any other blog. But this story was NEVER written about her. Other than calling her daughter adorable, we never wrote anything else about her. Yes, we did wrote about Caroline’s age controversy when she came out some years ago to claim she was 27. Many people didn’t believe her and that was the angle of our story. It wasn’t written with malice”.

Secondly, Caroline has told everyone that cares to listen that she adores and respects Linda Ikeji and doesn’t understand why Linda doesn’t like her. Linda has absolutely nothing against Caroline Danjuma. She just doesn’t know her. Finally we ask Caroline to please screen grab the page where Linda Ikeji Blog or any other blog in Nigeria ever wrote that her daughter isn’t for her husband. It’s news to everyone today because it was NEVER WRITTEN”. 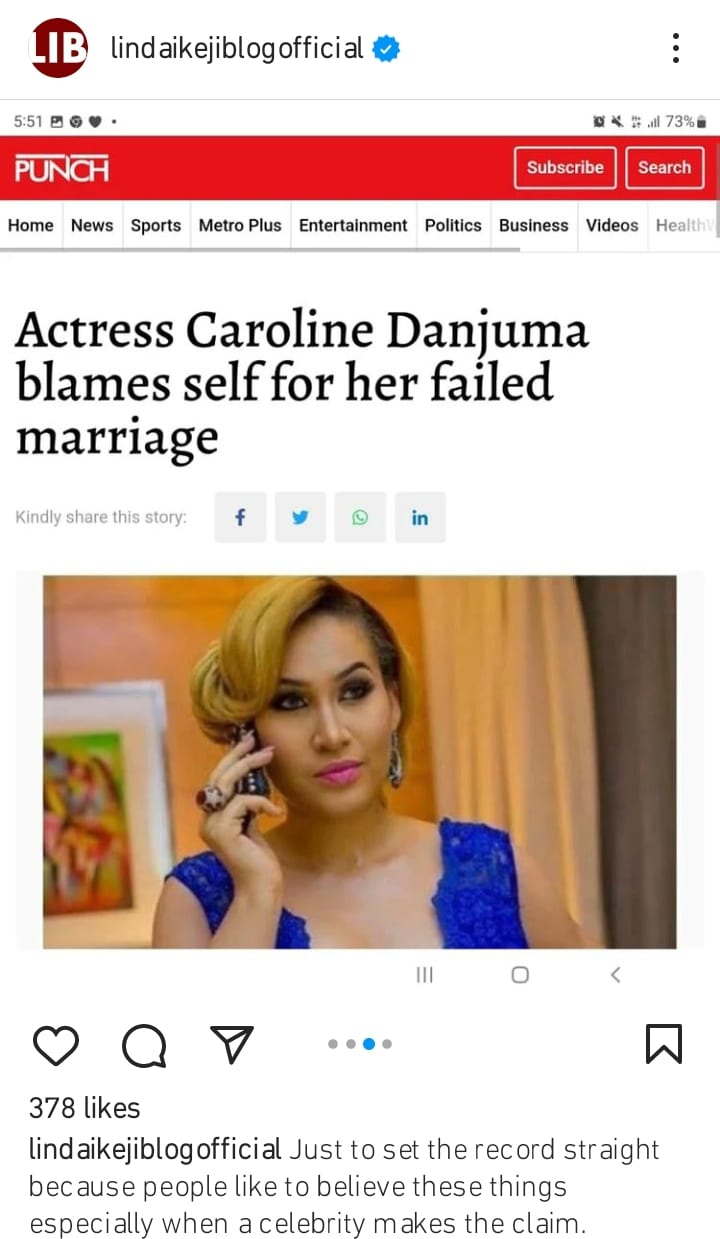 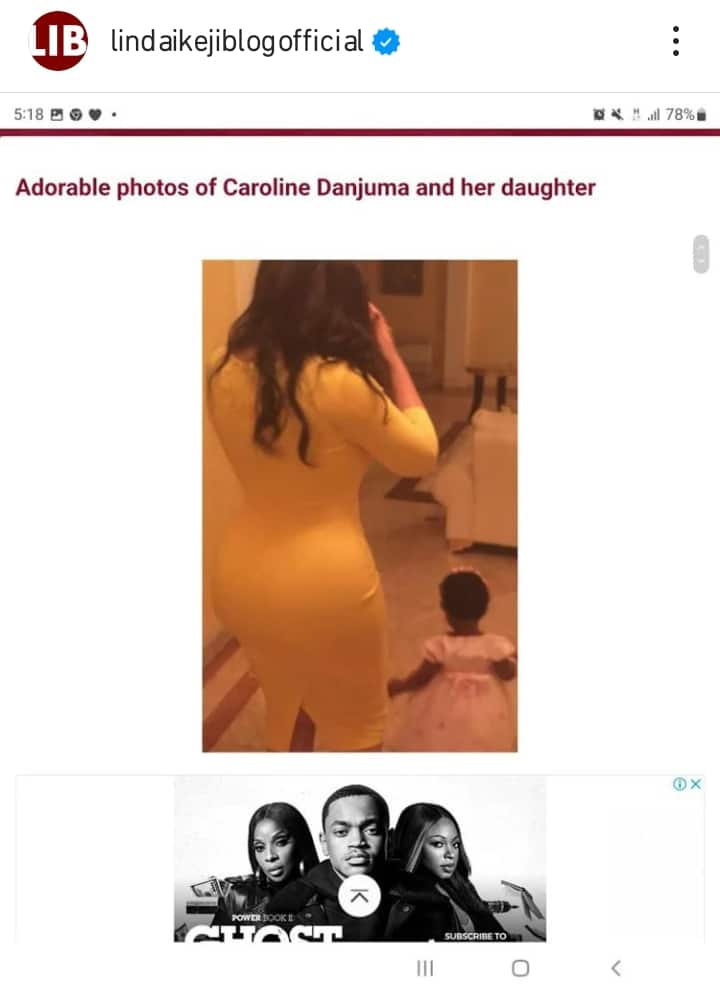 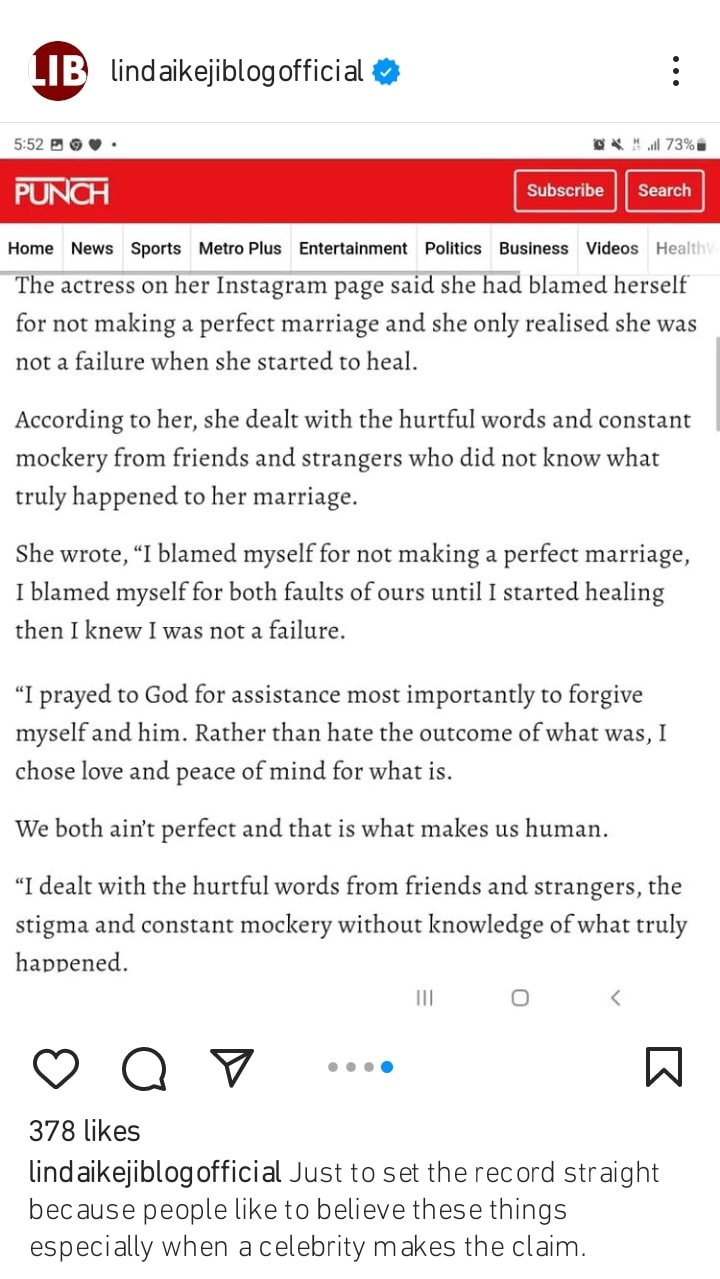 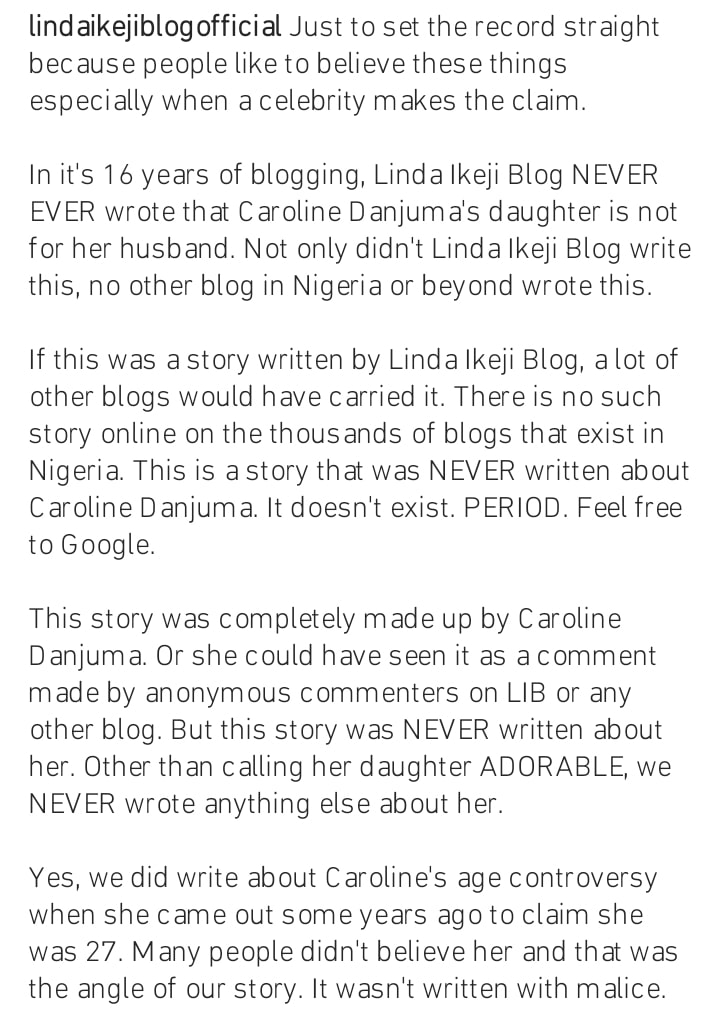 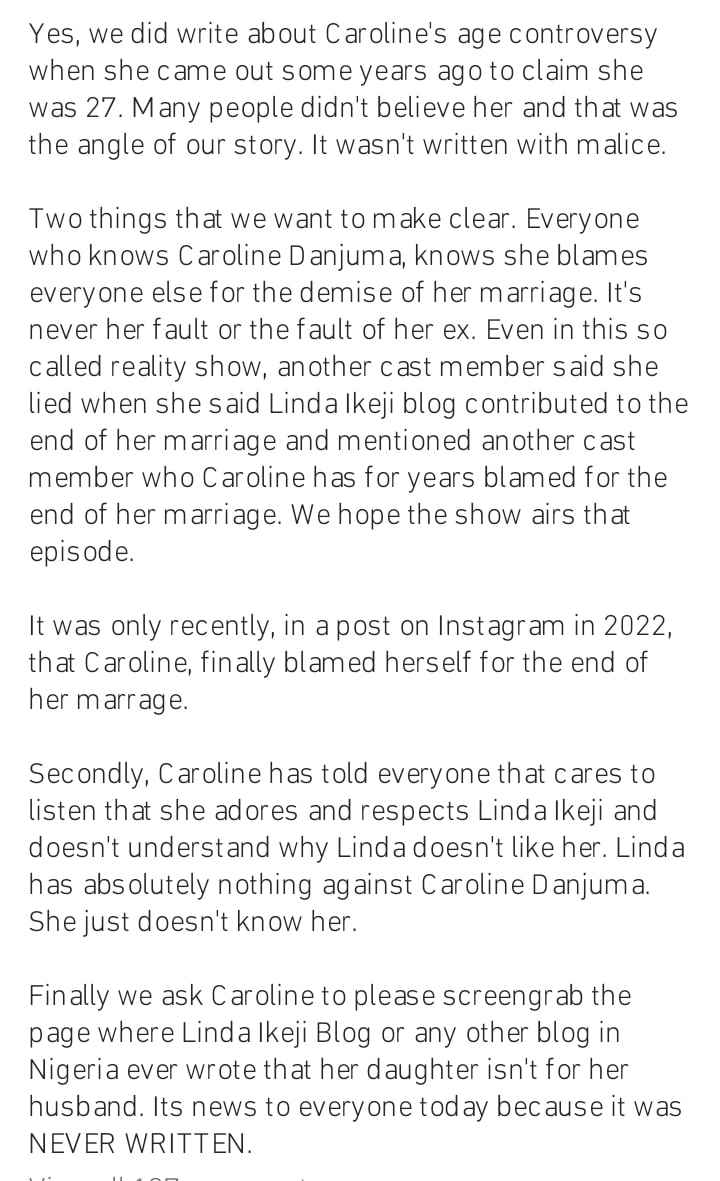