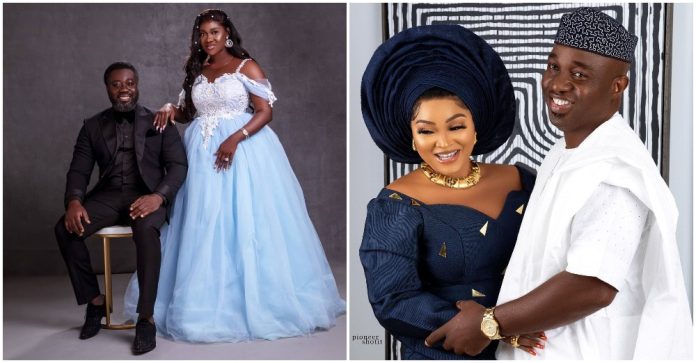 The dating scene in Nigeria isn’t exactly encouraging but it’s even harder for those who find themselves in the limelight.

Those in the entertainment industry have come out on occasions to make jokes about how they all recycle lovers among themselves due to an unexplained shortage of partners.

It gets even more difficult for women in the industry as some of them often find themselves playing second fiddle to married men.

Interestingly, playing on the side isn’t always enough for these superstars as they often end up ‘snatching’ the man completely from his family.

Some female entertainers have also argued in their defence that the men only come after them due to problems in their homes, marriages. And who are they to reject a man when there’s a shortage of sorts?

We a look at some Nollywood actresses who have raised eyebrows due to their choice of husbands. Check them out below:

The Nollywood actress’ marital life has been a subject that often paints her in a bad light on social media. Mercy was formerly married to Lanre Gentry, who was a former husband to her colleague Bimbo Akinsanya.

Years after the union crashed, the actress has once again sparked reactions on social media after introducing Kazim Adeoti as her new man. Her ex, Lanre, wasted no time in sharing a group photo showing Kazim’s first wife.

The Nollywood diva and her husband Prince Odi Okojie currently hold a dear space in the hearts of many because of how much they ride for each other.

However, Mercy wasn’t the first wife of Prince Odi. He was formerly married to a Canadian-based lady who had two kids for him.

The actress and her now ex-hubby, Daniel Ademinokan, were in the news years ago after they came out with their relationship.

Daniel had been formerly married to colleague and actress Doris Simeon before he pitched his tent with Damasus. However, both Stella and Daniel have now parted ways.

The young actress sparked reactions on social media after coming out with her relationship with billionaire, Ned Nwoko.

Regina had no problem joining the household of the wealthy man as his sixth wife. Her mother, Rita Daniels, was fully in support of the union even amid outcry from many for the family to reconsider.

However, Regina and her husband are both happily married at the moment and already have a child together.