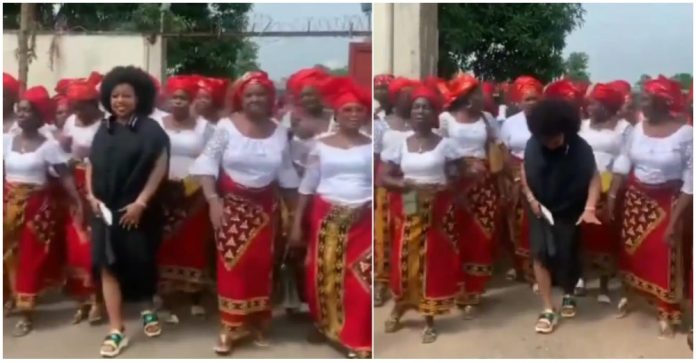 Rita Dominic has now been officially welcomed by the women in her husband’s family into the Anosike home.

A video from the ritual which is part of the family’s welcome tradition, has surface online and now gone viral.

In it, we see Rita Dominic dancing in a black dress while surrounded and hailed by elderly women in the tradition uniform.

Recall that Rita Dominic‘s journey to forever began last week, and her Nollywood friends stormed Owerri to support and cheer her on, making the #ReelDeal22 traditional wedding even more spectacular.

Rita and Fidelis Anosike got married in Aboh Mbaise, Owerri, Imo State on Tuesday, April 19, which was the talk of the town as Nigerian celebrities graced the ceremony.

The wedding ceremony had all categories of notable personalities across the country, especially Nollywood personalities and business people shutting down Owerri. They were there to see beauty among beauties and talent among talents finally get married after being subject to many speculations and the recurrent “God when!” that is declared on her behalf.

There are several reasons Dominic’s and Anosike’s wedding drew the attention of all and sundry. For one, Dominic has been a notable presence in the Nollywood scene since donkey years. Her beauty and talent always marked her for greatness, and indeed she has achieved it to a great degree. The only problem, according to people who refused to mind their business, was the fact that she remained unmarried.

The reason for Dominic’s abstinence remains a secret known to her and those she deems qualified to know. What is known everywhere is that she found love in the arms of Daily Times boss, Anosike. And they have been together for quite some time, choosing only to make their relationship public sometime in 2020.