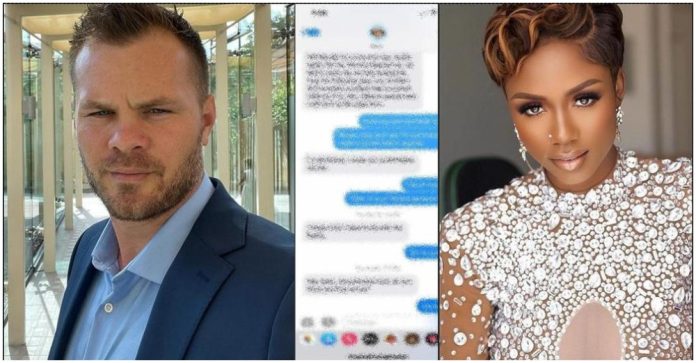 Estranged husband of the popular dancer, Korra Obidi, leaks a chat of his wife where she confessed to lying about domestic abuse.

It would be recalled that the marriage of the duo which is currently on the verge of collapse started when Justin Dean was accused of being an abuser.

In a new development, the father of two revealed the confession of Korra Obidi with someone elsewhere she admitted to framing her husband.

Sharing the chat, Justin affirmed that Korra will lose in court as he wrote, “Proof that Korra is lying about physical assault! She already lost this battle in court. Which is why I was able to see my kids!

This is a felony (purgery) and I am pressing charges.
We had therapy about this and she admitted to lying about me ever being physical with her.

She kept saying that I was going to eventually hit her. So I tapped her softly jokingly with enough pressure to burp a baby and said,” never say that again”.

We laughed and she woke up utterly convinced that I assaulted her.
Korra, take your meds!”

See the chat below …

Recall that few days after Justin Dean removed and returned money from his estranged wife, Korra Obidi’s account, her sister, Nancy Umeh has called him out.

Earlier we reported that Korra Obidi cried out on Facebook, accusing her estranged husband, Justin Dean of stealing money from her.

Few hours after he was called out and labeled a thief by his estranged wife, Korra Obidi, Performance Therapist, Justin Dean has reacted, declaring that he is not a thief as the transaction was a mistake.

In a fresh video, Korra Obidi’s sister, Nancy Umeh who said she has evidence, revealed that Justin Dean abused and smashed her sister’s numerous phones to prevent her from making money online.

According to Nancy Umeh, her sister Korra has been abused on several occasions by Justin but she was the one that prevented her from making it public.

Nancy said she prevented her sister from revealing the nasty things Justin has done to her because of her children.

Korra Obidi publicly admits to cheating on her husband in new video, give detailed account of the circumstance (VIDEO)

“I am so clean, I insert my hand in my v and put in my mouth” — Nkechi Blessing continues to dispute ex’s claim...

“May Allah not let me bury any of you” – Oga Bello cries out to God for his children, shares pictures with all...