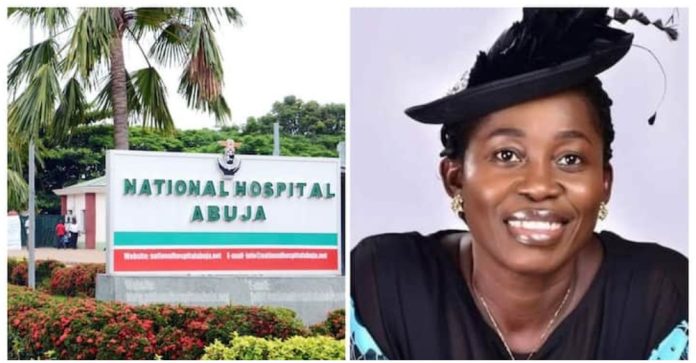 On Monday, May 16, the National Hospital in Abuja, dismissed claims that the corpse of famous gospel singer, Osinachi Nwachukwu, was singing ‘Ekwueme’ while in the mortuary.

The spokesman for the hospital, Dr Taiwo Haastrup, said there was no proof that Osinachi’s body was singing in the morgue, The Punch reports.

Speaking with newsmen, Haastrup disclosed that somebody dead couldn’t be singing while in the morgue.

Osinachi, a chorister at the Dunamis International Gospel Centre, died a few months ago allegedly due to domestic violence she suffered from her husband, Peter Nwachukwu.

Following her death, her corpse was deposited in the National Hospital mortuary.

Reports had it that mortuary attendants alleged that Osinachi’s corpse was singing her hit track, ‘Ekwueme’, in the middle of the night.

Reacting to the report, Haastrup said:

“Medically, there is nothing like that; it’s just an imagination of people. Somebody that is dead and is a corpse, how would such a person be singing in the night?

“There is no medical backup to that; it’s an imagination that may be due to the church she attended while alive, and the songs may just be giving people ideas, but there is no proof in any way. It just can’t be proven in any way.

“Somebody that is dead is dead and has become a corpse; it’s inside a morgue, it can’t sing and can’t move so it’s an imagination of people.”

On the autopsy report, Hasstrup said:

“It’s a coroner case, and it’s confidential; we can’t reveal anything there. The IPO in charge will give it to the IGP, who will turn it to the court.

“The result has been submitted all the same, and our people did it confidentially.”

A nurse in Anaesthetic practice on the possibility of corpse singing in mortuaries has noted that it is not scientifically and medically obtainable.

The Nigerian nurse who admitted that although nothing is impossible with God, made it clear that she has not come across such in her years of practice, especially because she does not work in the mortuary.