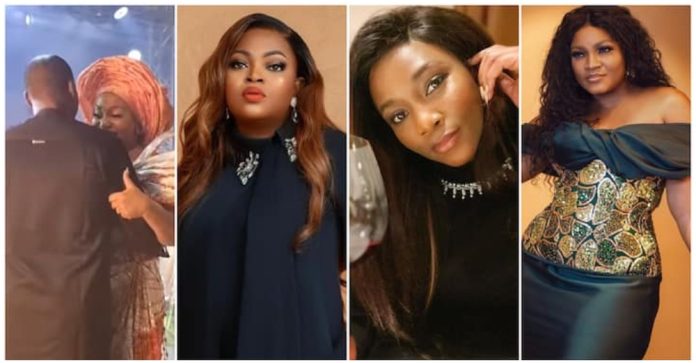 All roads led to Owerri on Tuesday, April 19, for the traditional wedding ceremony of much-loved Nollywood actress Rita Dominic and Fidelis Anosike. 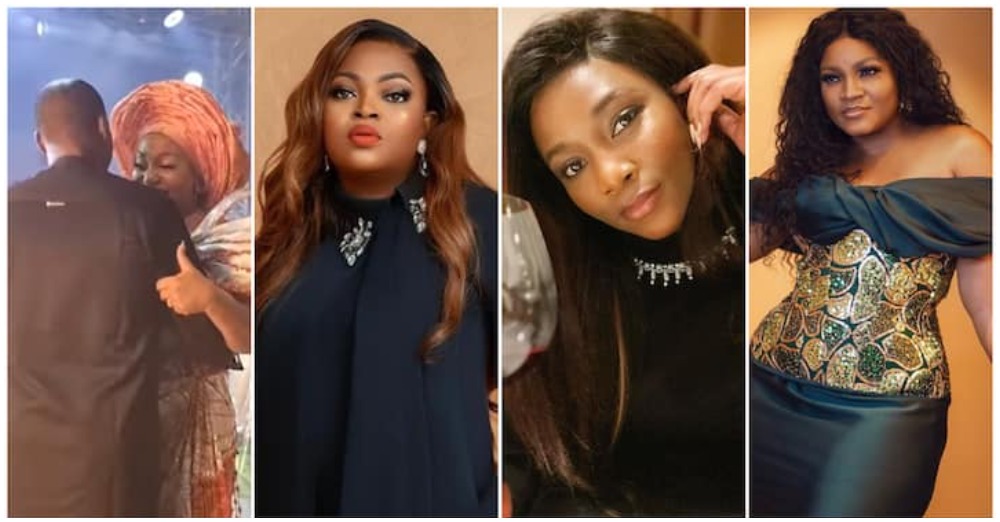 For reasons best known to the couple, they ditched the weekend for the event and rather chose a date during the week.

However, this was not enough reason for friends and colleagues in the industry to miss out on the special moment of one of their own.

Reality stars, actors, actresses and even music stars all embarked on a road trip just to be a part of Rita and her husband’s ceremony.

Surprisingly, some of the movie star’s female colleagues were noticeably absent at the traditional ceremony. Kate Henshaw among others congratulated Rita on social media while some others kept mum altogether.

Omotola and Rita ruled the movie screens back in the early 2000s and many had expected that she would be present to celebrate the special moment with her.

However, location tags on Omotola’s Instagram page suggest that she’s currently not in Nigeria but in the United States.

She, however, made sure to give a shout out to Rita via her Instastory channel.

While it should come as no surprise that the Jenifa actress missed out on another colleague’s special moment, some online observers still raised concerns.

Recall that months ago, Akindele had sparked reactions on social media when she failed to show up for her bestie Eniola Badmus’ #20YearsOnStageAnniversary.

Well, if she can bail on her best friend, it should require little or no effort at all to do the same to a colleague.

The controversial movie star has been a lone ranger for some time and it should come as no surprise that she was missing in action.

A visit to her Instagram page equally shows that she didn’t dedicate any congratulatory posts to Rita.

Well, maybe she did and decided to keep it away from social media.

This was another surprising colleague that never made it to Owerri to celebrate with Rita and Fidelis.

Mercy equally didn’t give any special shout-out to the couple on her social media page.

Perhaps, the actress has not been online as the last post on her Instagram page was shared three days ago.

The actress is known for showing support for her colleagues when they have any reason to celebrate something special.

However, she only just got married some months ago and it is understandable if a long trip to Owerri isn’t exactly so appealing to her.

For reasons unknown to many, the Nollywood actress couldn’t make it down to Owerri to celebrate with her friend.

Kate was, however, among ladies who showed up for Rita’s bridal shower event just some days ago.

The movie star was also noticeably absent at Rita and Fidelis’ traditional wedding ceremony in Owerri.

Although posts on Oboli’s Instagram page suggest that she’s currently at a movie location filming for a project.

The Nollywood actress was absent at the star-studded wedding ceremony and this comes as a surprise considering how much she shows up for colleagues.

A visit to Toyin’s page equally shows no shout-out or a congratulatory message to Rita Dominic and her husband.

The Lionheart actress isn’t exactly a social bird and it comes as no surprise that she wasn’t at the wedding ceremony.

Genevieve is also not one to put her private affairs on social media, even if it is something as simple as a birthday or wedding congratulatory message.

Perhaps, she celebrated her colleague in private.