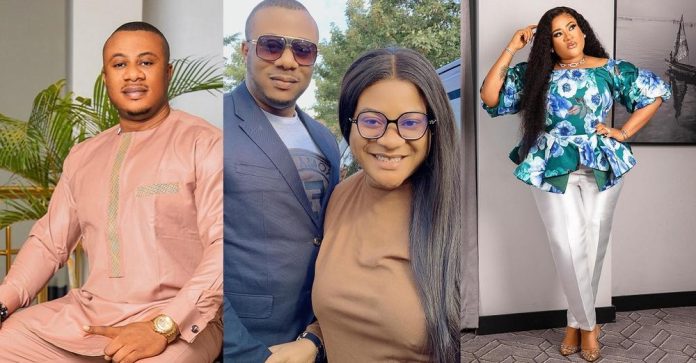 Opeyemi Falegan, the former lover of Nollywood actress, Nkechi Blessing, has publicly apologized to her following their messy breakup.

It can be recalled that the couple started dating in 2021 and the thespian used to flaunt him on social media, calling him her “husband” and other sweet names.

However, things turned sour recently and they started dragging each other’s dirty laundry online. The self-acclaimed Honorable had claimed she was with him for sex and money, but the thespian countered his claims, saying that he wasn’t financially buoyant and wasn’t a politician as he claims to be.

She also disclosed that they were never married and she was only blindly in love with him, hence her reason for calling him her husband.

The drama dragged on for days as they kept throwing shades at each other via their social media handles.

Well, in an interesting turn of events, Opeyemi went live on Instagram with media personality, Daddy Freeze, on Monday, May 9, and tendered a public apology to the actress.

He admitted to being partly at fault for their breakup and sincerely apologized to her, while noting that he is still in love with her.

The thespian has now reacted to the apology in a series of posts she shared on her Instastories. She iterated that she would never go back to him.

She also shared a photo with one of her exes and stated that he’s the kind of ex that she can remain friends with because he doesn’t have a loose tongue. “I am blessed with the most loving friends in the world” – Ini Edo releases photos of top celebrities that graced her lavish 40th...

“I curse the day I ever met you..I found out about my husband’s marriage to Mercy Aigbe online” – Kazim Adeoti’s first wife Funsho...

“I am blessed with the most loving friends in the world” – Ini Edo releases photos of top celebrities that graced her lavish 40th...

“I curse the day I ever met you..I found out about my husband’s marriage to Mercy Aigbe online” – Kazim Adeoti’s first wife Funsho...