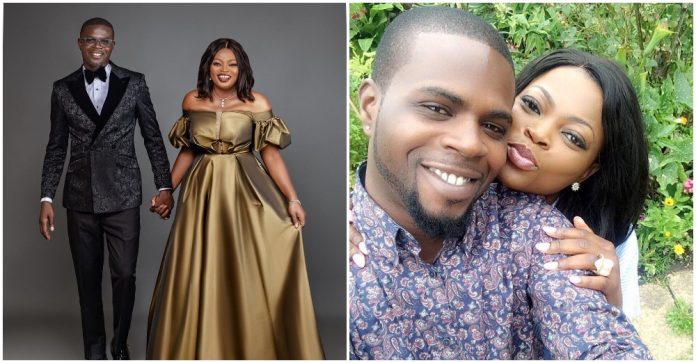 Some Nigerians have reacted to the viral reports about the marriage of Nollywood actress Funke Akindele going through hard times.

We earlier reported that Instagram blogger Cutie Julls alleged that Funke Akindele and JJC Skillz’s union fought dirty at home, with the wife ordering her husband to leave her house.

The source revealed Funke Akindele had boldly accused her husband JJC Skillz of squandering money which she disagreed with, considering she is the company’s owner.

Read the report below …

“According to sources in Nigeria and majority in London, Funke and JJC Skillz’ marriage is going tbrough some hardtimes to the extend that Funke reacting in anger verbally told JJC Skillz “Leave my house”

Sources present when the heated argument happened in their Amen Estate home quoted Funke saying “O ko owo mi je” when they tried calming her down.

Our source told us Funke Akindele has boldly accused Abdul Bello of squandering money which she did not agree to as the largest owner of company.

We are not sure if this has anythinh to do with the apartment Abdul allegedly rented somewhere in Lagos.

Skillz since left Lagos for London maybe to cool down and also give his darling wife some space to calm dowm also.

Hmmm.. at this moment, all is not perfectly well between Baba Ibeji and Iya Ibeji.” Meanwhile, JJC Skillz has left his home and rented an apartment somewhere in Lagos and is currently in London to cool down and give his wife Funke Akindele some space to calm down.

This generated a debate online as some netizens averred it is wrong for a man to move into a woman’s house after marriage.

beychanas wrote: You’re depicting an image of low self esteemed men, there’s nothing wrong with moving into the woman’s house if hers is better. Just support her and strive for your self as well, and any woman that sees it as a form of control is misinformed

wiildfeminine wrote: It is only am issue here in Nigeria. It is not a big deal in America. Many men move into their wife’s houses and are doing fine. Many men here are house husband’s, doing chores, taking care of kids and rhe woman is the bread winner and they all seem to be doing well. Let people do what is okay for them. It is not written anywhere that it is a woman who must move into a man’s house. If the woman is earning better and has a more comfortable house, are you saying she should abandon it and move into the one that is not comfortable?

ezeikeujunwa wrote: Never marry a woman and move into her house. A woman having the money will never be the same with when the man is the rich one…u don’t get to spend a woman’s money anyhow unlike women that spends their husband money….even if u are married to a rich woman, try get your own so that she will not wake up one day and insult your life….infact it goes both ways

kawl_mi_shawlar wrote: The right thing to do is a man marrying a woman to his house even if na rat hole since the woman agreed to marry him then she should be able to live where he lives… But things has changed na