MaDailyGistGet the Latest Gist in Town
More
GOSSIPGet Daily Gist
More
Home General News “My father told us that beating women is good, he seized her... 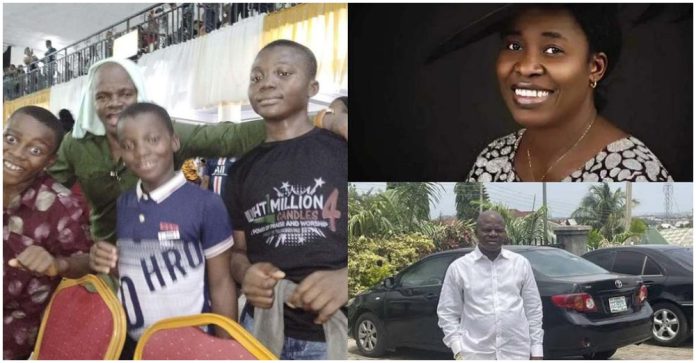 The first son of the late gospel artist, Osinachi Nwachukwu has revealed how their father made them believe that maltreating a woman is acceptable. He recounted how his father seized the two cars Osinachi Nwachukwu was gifted by people, thereby forcing her to always board bikes.

Eneh Ogbe who had a meeting with the boy and other children of the artist made the disclosure, she said:

“By God’s grace I was in our beloved late sister’s house this evening again and am glad that he was actually arrested by the police.. But what baffles me is the way and manner he has polluted the children’s mind.

I had a chat with the first born and i almost started crying again. This boy told me the ordeal his mom has been going thru with his dad, how he beats her up in any little argument, he said anti my dad pushed my mom out of the car at night after wed service and bad boys snatched my mom bag that night how mom got home that night i cnt tell cos dad left her,people dashed my mom this two cars (pointed at them for me to see) but dad at times will say my mom shuld take bike while we go in the car, even when we are coming back from church my mom will stand under the sun and we will drive and pass her and we will wave at her, my dad told us that beating women is good.. I had to cut in the conversation and i told him is very very wrong to beat a woman and that God is against it and i really talk sense into him.. He said they are happy that their dad was arrested becos he shout beat them up too.. The second born sang for us too he has a golden voice like the mom.. The first said my mom always keep quiet for my daddy and she always forgive and now she has died and i told him not to worry as his mom is in heaven!!! May the soul of our beloved sister rest in peace and may God take care of her four kids she left behind Amen!!”

Since the demise of Osinachi Nwachukwu, the gospel singer known for her collaborative hit track ‘Ekwueme’, there have been allegations that the singer was a victim of domestic violence.

Speaking on the controversy surrounding Osinachi’s death, Mama Sarah, the house help of the family told The Cable newspaper that she has been working for the family for close to a year, but only visits the house three times a week to help with chores.

Mama Sarah said whenever she notices the couple quarrelling, Osinachi would dress up, leave the house and go to the church.

One of the neighbours, however, told the newspaper that she always hears Osinachi screaming and her husband addressing her with derogatory words.

She said their squabbles were constant, such that she worried if the husband was actually a pastor as he claimed to be.

Another neighbour, from whom Osinachi buys stockfish, said the few times she saw and conversed with her, the singer always looked “depressed, tensed and scared.”

Musa, a gateman in the building behind Osinachi’s house, said the couple often fought, and that on several occasions, he had to scale the fence of the house to unlock the gate for the singer, whenever her husband locks her out.

“Before the woman died, they fought a lot and even at night I hear them quarrel. I don’t know if he [the husband] does not like her going out but if the woman goes out, he will lock the gate and refuse to open the gate when she comes back.

“She will come and call me to help her climb the fence and unlock the gate for her. And once she enters, the man will start making trouble again.”

In a related development, the police public relations officer in the Federal Capital Territory, DSP Josephine Adeh, has confirmed the arrest of Nwachukwu, the late singer’s husband saying:

“The man, Peter Nwachukwu is currently in our custody. A family member of the deceased lodged a report at Lugbe police station.

“Following the complaint, we arrested the suspect and the investigation is currently ongoing. We will make findings public.”