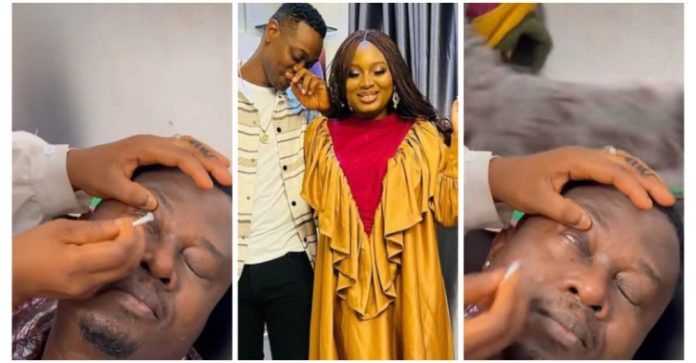 Nollywood actor, Muyiwa Ademola has publicly called out his junior colleague, Lateef Adedimeji and his wife, Mo Bimpe for what they made him do on a movie set.

Muyiwa who had vowed never to use contact lenses had to give it up to appease the couple while on a movie set with them earlier this week.

Taking to his Instagram page, Muyiwa revealed this while lamenting over the difficulty in filmmaking.

He revealed that the job isn’t easy and he is one who can’t stand anything coming close to his eyes.

He disclosed how he had no choice but to wear it after the actor and his wife made it compulsory.

“Nothing is just easy about this job..I really can’t stand anything coming close to my eyes but on this set @adedimejilateef and his queen @mo_bimpe said I must wear this contact lenses and I had no choice. To wear na war, to remove na Wahala 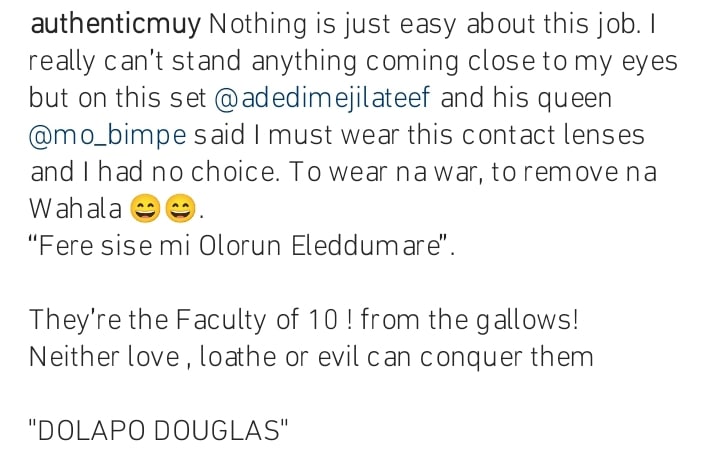 He revealed how the veteran couldn’t hold back her tears while shooting a movie scene over the weekend.

The talented actress wept uncontrollably as she brought her role to life and it took a village of her junior colleagues on set to calm her down.

The scene was so touching that the actress wept profusely.

According to Muyiwa Ademola, they had to calm her down for hours before she could regain herself.

He noted how many of them have to cross the bridge to the world beyond in order to give justice to their roles.

stated that often times, getting back into one’s true character becomes difficult.

“We were just working through the limes and Mama could not control her tears. It took so much effort to calm her down. We sometimes cross the bridge to the world beyond in order to give justice to our roles and getting back becomes quite difficult”.