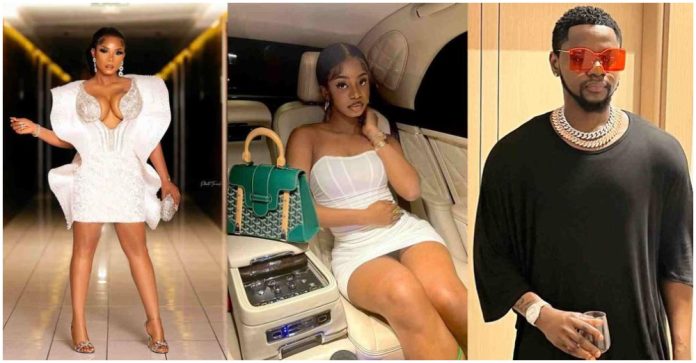 Nollywood actress, Iyabo Ojo has spat fire while reacting to an allegation about her daughter, Priscilla dating singer, Kizz Daniel.

The thespian’s response came after the popular IG blog, Gistlovers shared a screenshot of the message it received from an IG user that fumed over the fact that Priscilla Ojo’s relationship saga with Kizz Daniel wasn’t thrashed on the blog.

The netizen also accused Iyabo’s daughter of prostitution while covering with her influencing job and this was what caught the actress attention.

Sharing the chat, Gistlovers confirmed that Kizz Daniel is not in a relationship with Priscilla and dismissed the claim as a mere rumour.

“Hello tueh tueh 😂😂I guess this person Dey new on our page, Akoi new student ??😂😂if

she don tey she go know say we no send anybody papa, as Tonto Dey repost for us reach if she do anyhow she go see anyhow, as I Dey call iyabo my wife reach when her matter with Dino reach? I no post ?? Now this is it, you see all these small small blogs, low budget GLB 😂😂if them post and you see their gossip una begin Dey para say I no post am, make I post wetin I no know about ??? Secondly Kizz no be Davido or Wizkid wey Dey open him affair waaaaa ontop Instagram , before una see him baby mama una know wetin una eyes see Na 😂😂😂 so Kizz and iyabo pikin wey Dey purposely post location to spark reactions for their music and tour promotion, una Dey give them free advert 😂😂Kizz that we all know won’t be knacking iyabo pikin and still flaunt her in the page 😂😂, so saying I am bias about it, far from it, her mama sef Dey collect if she f#ck up, how much more pikin?? Na lie me I hate sha🚶‍♂️🚶‍♂️🚶‍♂️ if Na true them Dey knack, in no time I go find out, my hand Go touch them, but for now, NO!!! If na another venue now and not Kizz, hen hen, the person wey Dey enter Prisy Na Dubai boy, make una no send me fake gist again . I come in peace” Iyabo Ojo however took to the comment section of the post to rain curses on the netizen that sent the demeaning information about her daughter.

Read the translated version below:

“You’ll won’t use your hands to do good things. The god of thunder will destroy you. May the gods kill you and your generations; god of iron will bath with your blood, to everyone that wants to wage war against my children, Iyabo Ojo….. May you be amongst the losers, amen to that. You are no match for you, go back and get reinforcements.”