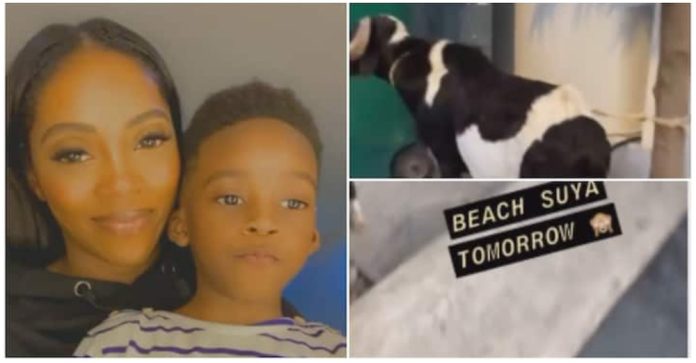 In the trending clip, Tiwa Savage showed her son a ram tied outside their gate to be used for her beach party later in the day.

After seeing the ram, Jamil wanted to know if it was their new pet. His question so much amused the singer that she burst into laughter.

Tiwa later explained things to her son and told him that it wasn’t a pet because the animal was going to be made into suya and pepper soup.

Tiwa’s explanation on how delicious the pepper soup and suya will be fell on deaf ears for Jamil.

A number of internet users were amused by Jamil’s reaction. Many of them spoke on how innocent children can be.

Read some of their comments below:

Iyenoma.xo: “Children are so innocent ❤️.”

Itz__yeesha: “Such an innocent soul he said I don’t want to kill it .”

Kimjewel20: “It gonna be delicious .”