MaDailyGistGet the Latest Gist in Town
More
GOSSIPGet Daily Gist
More
Home General News “If he like he should donate N1 billion. We face where we... 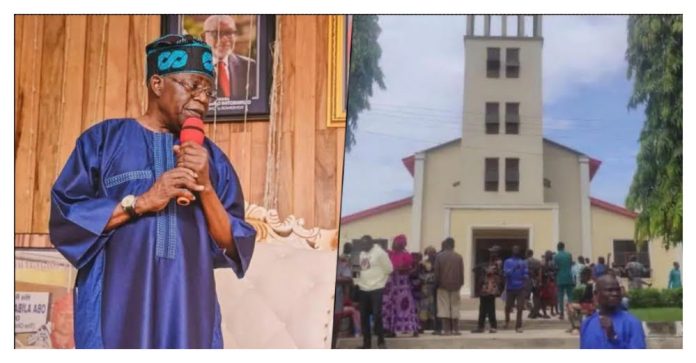 The Presidential aspirant of the APC, Bola Tinubu has handed out a sum of N75m to the Catholic Church and families of the victims of the Ondo attack. Recall that on Sunday, June 5, Ghgossip reported that over 50 persons who were worshipping at the St. Francis Xavier Catholic Church were massacred by gunmen suspected to be bandits.

A lot of dead bodies were soaked in their own bloods in the graphic photos and videos which saturated social media.

In a tweet, Asiwaju Bola Tinubu and other delegates visited the place of the massacre to sympathize with the families of the victims. Rotimi Akeredolu wrote while sharing the news of the donation via his official Twitter page;

“Today, we received the National Leader of the APC, Asiwaju @officialABAT
accompanied by Former @HouseNGR Speaker, @YakubDogara and other eminent Nigerians who came to commiserate with us over the Sunday terror attack at St Francis Catholic Church, Owa-luwa Street in Owo.

We thank Asiwaju Tinubu for the 50million naira donation to the families of the victims of the terror attack and another 25million naira for the Catholic Church,” he wrote. 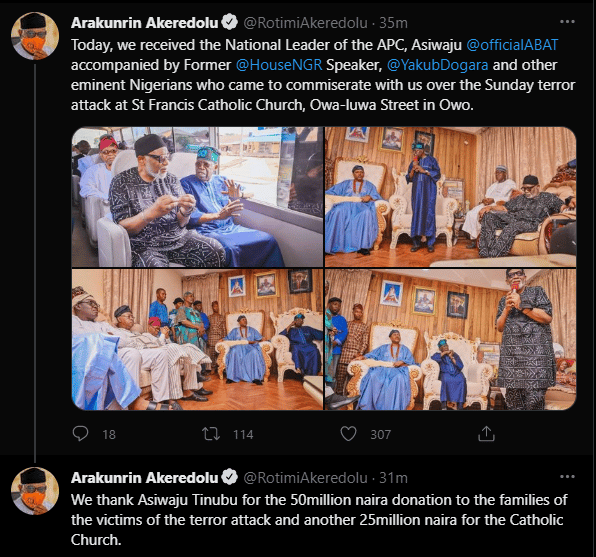 Many Nigerians, however, had conflicting feelings about the reason behind the monetary gift to the church and relatives of the massacre victims.

we culled some of them below;

dave.tyler22: wetin be this? was this one campaign strategy?

ella_beauty_flower believes Bola Tinubu is behind the attack, she wrote: maybe he even send them @so he can used that as campaign strategy, that man is desperate

kelvin_young001 had this to say: And how many millions did he donate when the lekki shooting (massacre) took place? Una wan dey play gample with peoples live … God dey sha

njokumotors: if he like he should donate N1 billion. We face where we face. We don’t want any distraction cos we ve focus, vision & mission to accomplish pls.