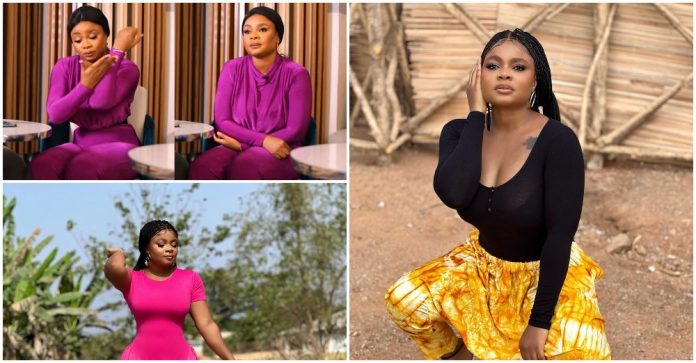 Creating a movie, TV show, or anything that goes on air is a lot of work. While consuming content is so easy and entertaining, creating it is a lot more difficult, time-consuming, and sometimes dangerous. A lot happens on a movie set. From arguments between cast and crew to unexpected accidents to production issues, a lot happens to give you the work that you finally get to enjoy.

Nollywood actress Bimbo Ademoye during her episode of Meet & Greet with the guys over at Inkblot opened up about the ‘craziest thing that has happened to her on a movie set’. Bimbo remembered the experience all too well. Here’s what she said.

Speaking about the craziest thing that has happened to her on a movie set, Bimbo Ademoye said:

One time when we were filming, I was upstairs and I was going downstairs. Somebody had put a cup of hot water on the rail upstairs. For some reason when I got downstairs, it poured on me. Like from (my neck) all the way down. Thankfully I didn’t have any burns but the sting and everything, I screamed. So I went into the bathroom. Then, the production manager came to knock, “We are waiting for you”. (What?!) Everybody saw the cup fall on me and he was like we are waiting for you. (Laughs). So, I open the door and all the curse words that could come out of my mouth. It took so much not to put my hands on this man even though I knew he was going to beat me up. Like who raised you? Then the director came downstairs and she said “Bimbo sorry he’s only doing his job”. I haven’t worked with her since then, I don’t think I’m ever going to do that. That has to be the craziest.

I’ve had situations where I went on set from morning and they didn’t shoot my scene and I left at like 1am. But I think that hot water pouring on me was the craziest. That’s what I keep saying about production managers. I feel like in their heads they’re robots, they’ve been wired to like just make sure that whatever happens, make sure the production keeps moving. Come on now! They almost do not care. There was a time Kunle Remi had an accident, like there was a huge gash on his hand. And then he got on set and the bandage was bloody and the production manager goes “please give him costume, we’ve been waiting for him.” I’m like… I don’t get it.

Nawa o! While I understand that the production manager was doing his job, he could have been more understanding to the fact that hot water had just poured her. The Kunle story is just another mess. Wow, these our Nollywood actors really go through a lot to bring us entertainment. Huge shoutout to everyone working on Nollywood productions. It’s not easy.