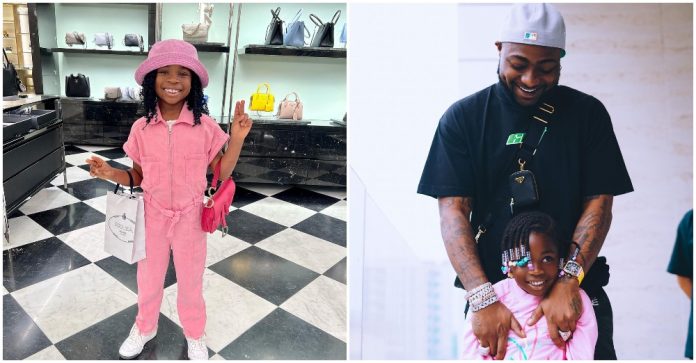 Popular Nigerian singer, Davido’s first daughter, Imade, has made it clear that she has no idea what ‘hard times’ mean.

It all happened during her mother, Sophie Momodu’s Instagram live session when she replied to a curious fan’s question.

During the live session, Sophie read out a question from a fan who wanted to know if they had ever gone through hard times before.

After the question was read out, Imade innocently replied that she didn’t know what it meant. She said: “I don’t know what that means.”

Her mother, Sophie, was very shocked by her daughter’s answer that she mistakenly dropped her phone. After regaining her composure, Imade’s mum prayed that her daughter will never know hard times.

Imade’s interesting comment raised a lot of reactions from internet users. Read what some of them had to say below:

Threadsbynessa: “And you’d never know what it means baby. And I pray same for my kids and entire generation unborn. Amen.”

Abenababbyie: “My children will never know hard times in Jesus name amen. Hard times are over for me in 2022 amen.”

Oduware__: “Imade is a whole vibe ❤️ Such an intelligent and confident child!”

Adanze_h: “May you never know what a hard time is in Jesus name Amen.”

Precious.john.404: “Hard time is not only poverty o, tell her more about hard times later.”