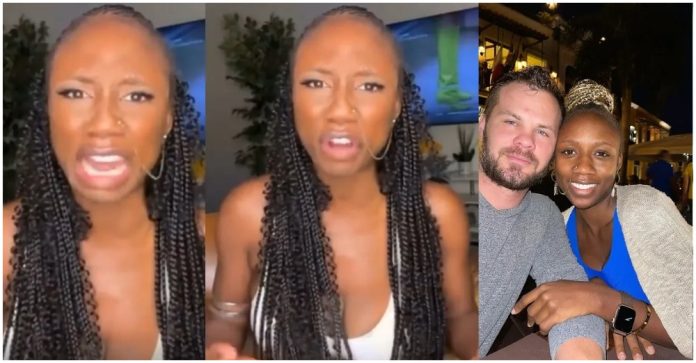 Popular Nigerian Dancer, Korra Obidi recently took to her Instagram live session to call out her estranged husband and father of her two kids, Justine Dean.

Korra revealed that he took the money from their joint account after she mistakenly sent it to a PayPal account it was linked to.

She accused him of wanting her and her girls to live in the streets, and doing all these after she had just given birth.

In her words: “I did not want to speak about my divorce in public, it was a decision I made, knowing that the internet never forgets and considering that I’m putting my children first.

“But at this juncture, I have no choice but to do what I’m doing right now.

“I have a lot of bills to pay including a $21,000 meant for the lawyer over their divorce case. Justin has not been responsible for any bills even though he caused all of them.”

“He just wants us to be homeless. I made the money for my girls, from my promotion, I sent it for rent, but he’s stealing from us.

“I know I have to be strong, but this is someone that comes online tarnishing my image and my reputation.”

Days ago, Korra Obidi revealed how her estranged hubby reportedly claimed ownership of her money when she started earning well.During a conversation with her sister, Korra whose marriage recently hit the rock after she put put to bed, described how her husband began to ‘milk’ her immediately she began to monetize her videos on social media.According to the talented dancer and singer, when the money started rolling in, her husband claimed ownership of it, because he sees her as his property, therefore her ‘money is their property as well’.

Recall Nigerian dancer and twerk queen, Jane Mena got into trouble again after a private chat between dancer Korra Obidi and one of her alleged numerous sex partners leaked online hours ago.

From the chats, the two influential dancers have been allegedly having an affair with the same man.

Controversial blogger, Cutie Julls exposed the private chats where Korra Obidi, who is still legally married though separated, was seen having conversation with a man about getting intimate.

It is also alleged that Korra Obidi was pregnant with her second child during the exchange.

From the chats, one can decipher that it wasn’t the lovers first time of getting intimate as the man gushed over her sexual prowess.