MaDailyGistGet the Latest Gist in Town
More
GOSSIPGet Daily Gist
More
Home Celebrity/Entertainment “Funke Akindele and JJC Skillz both cheated on each other and no... 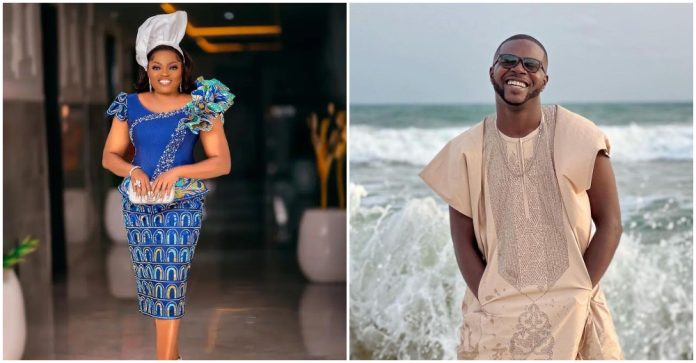 Benito, the son of JJC Skillz and stepson of Funke Akindele has spilled disturbing details pertaining to the celebrity couple’s marriage.

The lad made this disclosure during an IG live video after a netizen asked if his dad and Funke Akindele are on currently good terms.

According to him, he is tired of their lies and wishes that anyone on their team can speak the truth about as regards their union.

Benito further distanced himself from them by saying he doesn’t care or have anything to do with them any longer.

This is coming amid several reports on  Funke Akindele and JJC Skillz’s marital crisis.

In his words: “They are not really together. They both cheat on each other, they both had a fight. My dad is practically living somewhere else. I don’t even have any care for them no more. I can’t talk for them as a couple anymore. I can only say what I have seen. They are in open relationship.”

Recall Funke and JJC stepped out separately for the AMVCA nominee party.

Fans of the actress were saddled to know that the couple haven’t settled their marital crisis as it was evident at the event.

Unlike when things were going smoothly, Funke Akindele and JJC Skillz always turned up for events together, oftentimes in matchy outfits, but this year was different, as the couple came in different cars to the event.

To worsen it, there was no picture of the couple together nor where they were spotted sitting together.