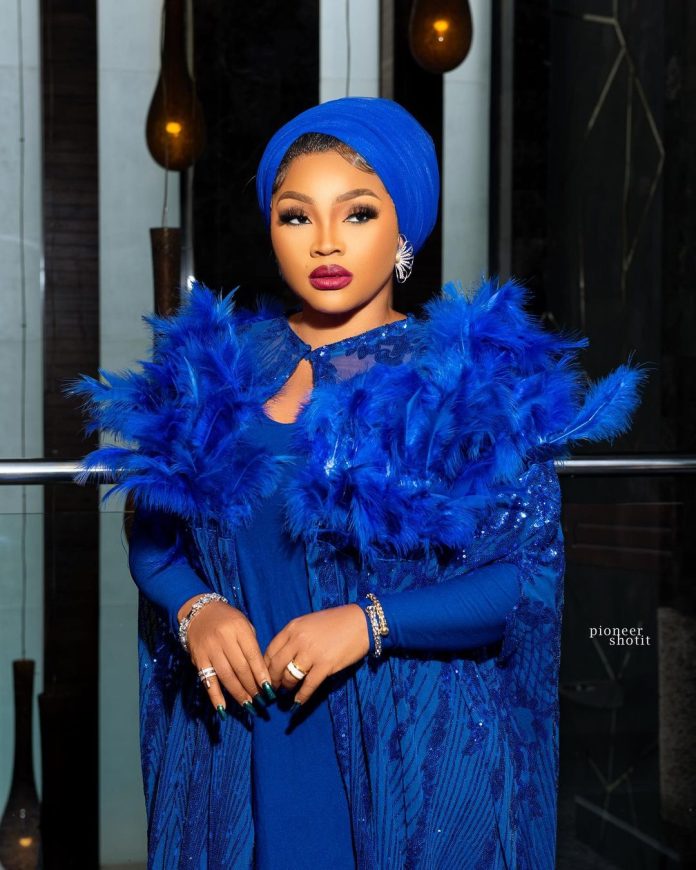 Nollywood actress Mercy Aigbe has reportedly tied the knot with her married lover Adakaz, the owner of Ibaka TV in a Muslim marriage ceremony.

Mercy Aigbe has been in the News for some time now for reportedly dating a married man with four children, whom he abandoned in Minnesota with his wife.

Amidst the speculations, Mercy Aigbe took to her Instagram page a few weeks ago to share a glimpse of the man, a video of the duo raining money on Fuji musician Kwam1 during his ‘All-White’ party.

In a new development, Instagram blogger Gistlovers has alleged that Mercy Aigbe had secretly tied the knot with her married lover.

Amidst fear of being dragged on Instagram, Mercy Aigbe took to her WhatsApp status to celebrate her lover ahead of his birthday on 24th January.

The post reads: Hello tueh tueh, Vawulence Headquarters I fear una ooo una make a whole mercy for Dey wish her married gbola ontop WhatsApp, she nor fit wish am on Instagram she know say una go scatter her page as we don post this one now, una go see say she go run wish am, wait on it, flaunting Married men in WhatsApp.

According to our source sef, as the man wife no Dey naija again, them don do nikkai for mercy codedly , una go Dey do film to advocate say make people no ruin homes, but Na una Dey ruin homes, it is well oooo, i come in peace , Mercy iyawo D owner, Adekaz. Igi pawpaw oni wo luwa ooo 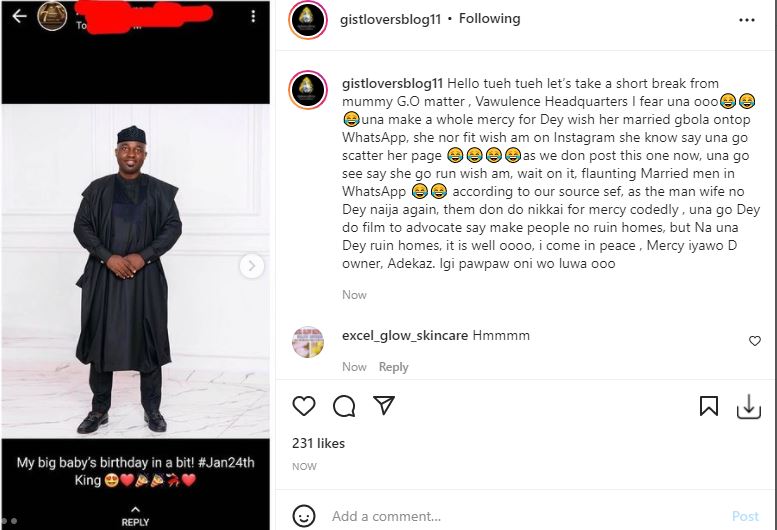 Recall Mercy Aigbe recently seemed unable to get over the tasty ‘Afang soup’ she ate in Akwa Ibom state as she laments about her cook giving her nonsense to eat.

In a post shared on her Instagram page, Mercy Aigbe said she had Afang soup in Uyo and realised the one her cook prepares for her in Lagos is different.

Mercy Aigbe said her cook has been giving her nonsense to eat and threatened to reduce her salary when she returns home.