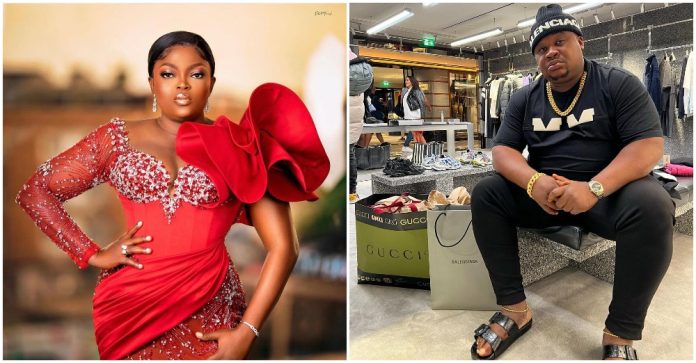 I want to start this out by saying that I am a fan of a number of celebrities in this post. If you follow me, then you know I love creating lists and when I see enough stories that I want to share with you at once, I create a list and I bring it to you with no malicious intention involved. These are simply things that have happened and are in no way intended to “smear” anybody’s name. Who has time for that?

Today’s list is one that I think is quite interesting. The list is “5 Nigerian Celebrities Who’ve Been Accused of Not Paying Salaries”. Without further ado, let’s jump right in because there’s a number of stories to get through.

The first celebrity on today’s list is Big Brother Naija star, Lilo Aderogba, who last year was accused by her chef of not paying salaries. The chef identified as Goodness Emenike took to Twitter to call out Lilo directly saying:

@LiloAderogba I am a chef… i want my salary i rendered services and i deserve to be paid my salary, it was my sweats i worked with

@Liloaderogba pay me my Salary, i am a human being i deserved to be paid my Salary i worked for it, you told your workers and security to chase me out when i came to your cafe to demand for my Salary, God will judge you!!!

I am not just coming to rant, i work for @Liloaderogba when i went to her cafe she insulted me and asked security to throw me out !!!! I have some evidence of my chats and calls with her Lawyer.

She blocked me from messaging her i won’t back down cause it’s my sweat, if you know her kindly tell her to pay me my Salary i sent my account details to her lawyer yemisi already 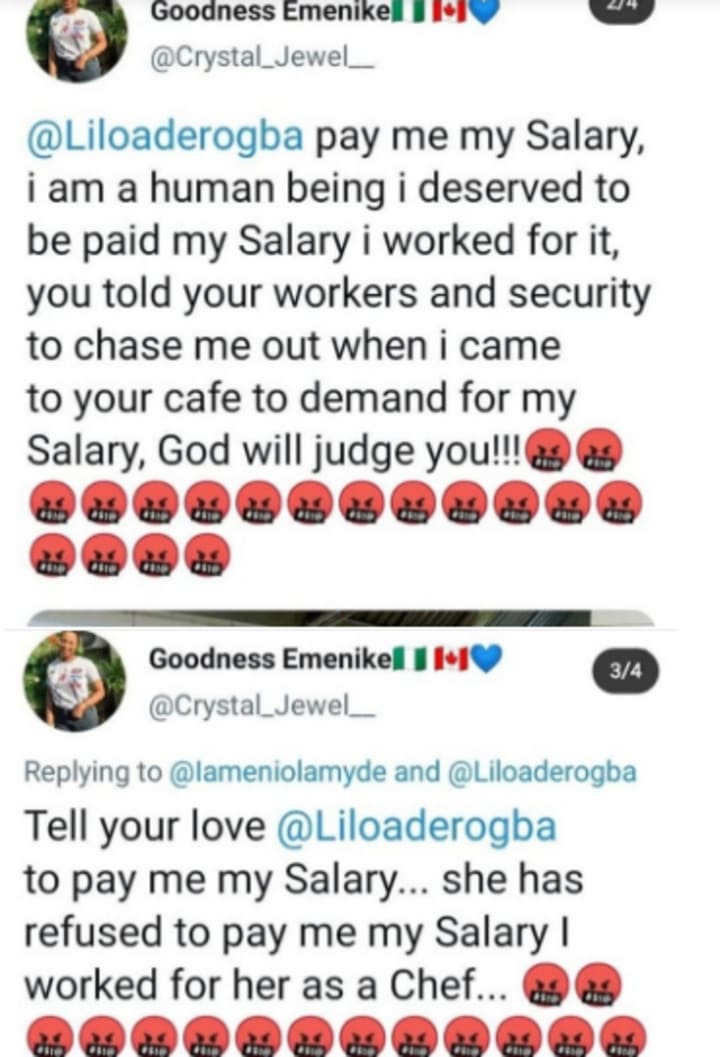 This is not the first time Lilo has been called out online over unpaid salaries. She was also called out months prior to this incident by a graphic designer who accused her of not paying for work he did for her.

Celebrity pastor Biodun Fatoyinbo is no stranger at this point to controversy. Earlier this year, Biodun was once again in the news cycle negatively. A former choir member at the Commonwealth of Zion Assembly (COZA) named Nnenna Kalu-Ade came out to accuse Biodun Fatoyinbo of owing salaries of church workers. Nnenna took to social media to post about her complaints and wrote in part:

@BiodunFatoyinbo People may not speak because they are afraid of you, I don’t blame them. I was like them too. But I’m no longer afraid. I left my fear by your gate on the day of my last worker’s meeting in your cult. I’ve never seen such cruelty; not paying workers’ salaries for months but expecting them to still show up every day.

Another Big Brother Naija celebrity who was called out over unpaid salaries is self-acclaimed boss lady, Ka3na. In 2020, an unidentified man called out the reality star in a video rant and accused her of not paying him and others despite working for her for several days. He also alleged that Ka3na locked them in the house for 2-3 days without the option of feeding and also instructed them not touch her pure water. Here’s the video the man posted:

Funke Akindele-Bello is another woman who over the years has had complaints documented about her online over her treatment of staff. In 2020, a former employee of Funke called Cassandra Owolabi came out with an almost 15 minute video where she chronicled the harsh working conditions and horrible leadership style she allegedly endured under Funke. Later, another woman named Ifeoma Tess took to Twitter to write:

Na wa for Funke Akindele o, how can most of your staff not have anything good to say about you? From verbal abuse to physical abuse and not paying them their salries. Oga. 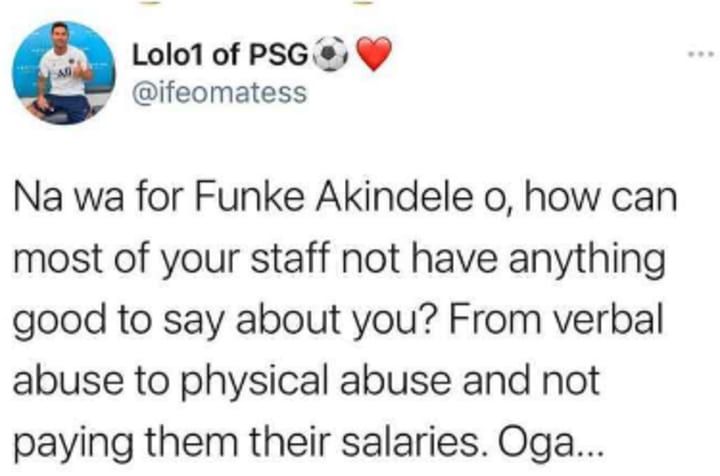 and now recently, another Twitter user posted a video of Funke dancing with the caption:

Anytime I see her dancing I forget she’s a bad boss who doesn’t like to pay her staff chai. Dance is good 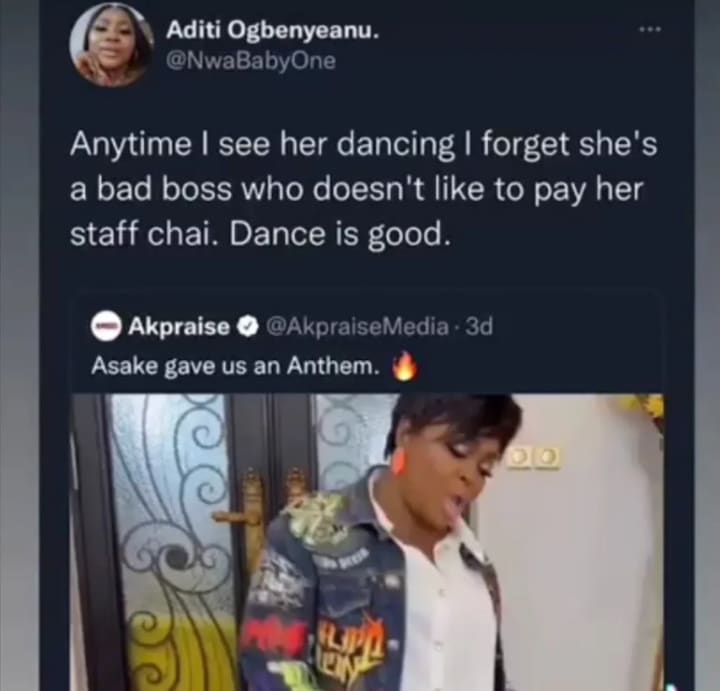 Finally, in 2021, after Obi Cubana famously turned his mother’s burial into a carnival where Cubana Chiefpriest sent him 46 cows in a trailer and also made it rain, a reality star by the name of Dr Cherry took to social media to call out Cubana Chiefpriest for spraying money while owing his staff. She posted in an Instastory:

Some people sha get mind oo! So you carry 46 cow + bundles of cash to celebrate a dead old woman, but you will want to sleep with any young lady before you can offer her any help and owe your workers plus deduct from their salaries at any given excuse. All these Instagram buffalo’s with fakeness mmwtchew! A dirty tout will always be a dirty tout regardless of the camouflaging face they show off #rubbish 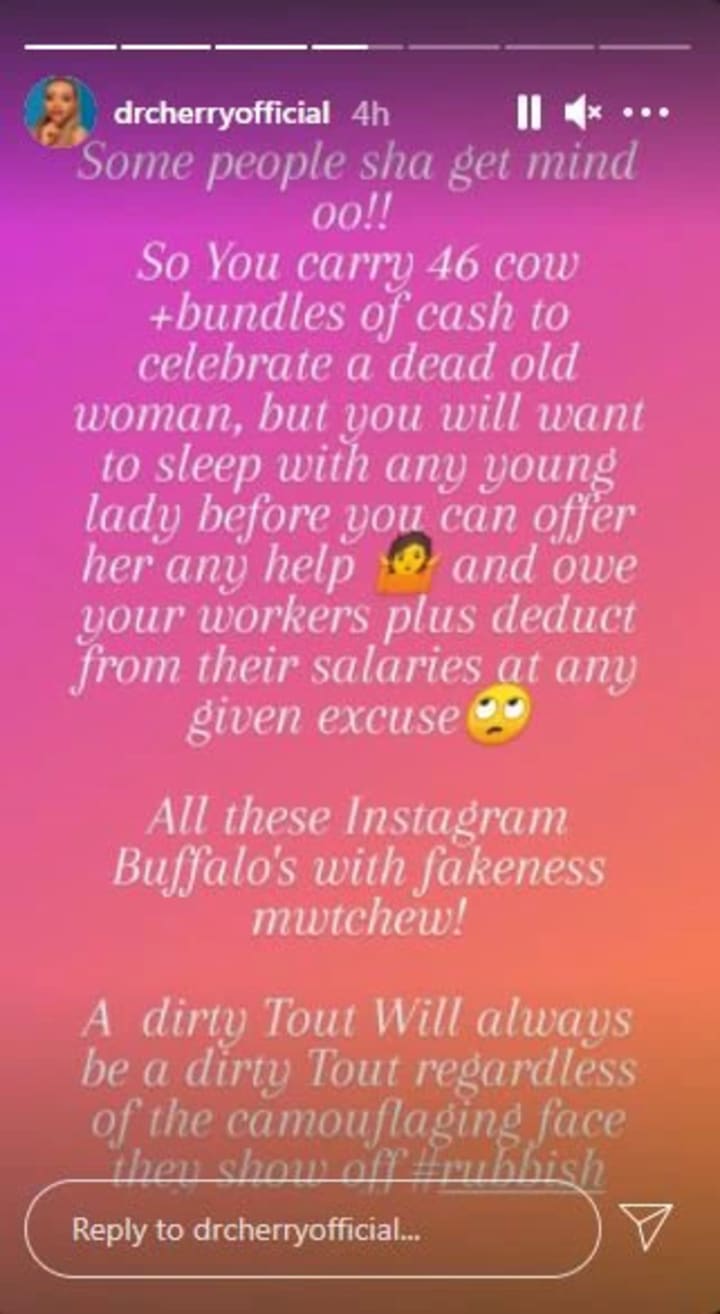 Of course, there are always two sides to every story and these are the sides of the accusers.