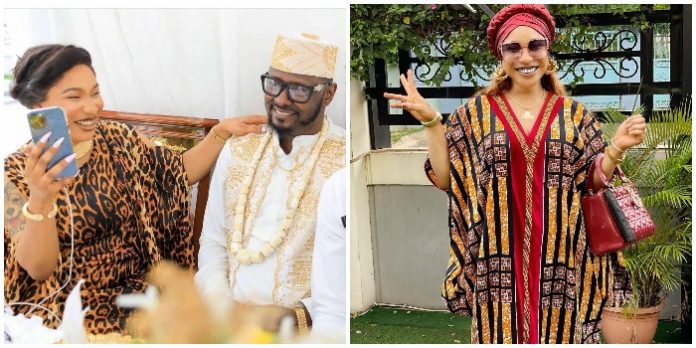 Tonto Dikeh has launched a legal battle against her estranged boyfriend, Prince Kpokpogri after she accused him of threatening to release her nude pictures.

Recall that the breakup of Tonto Dikeh and Prince Kpokpogri was a bit nasty as they spilled some secrets about themselves on social media.

Tonto consulted a legal firm to take up matters in court as some documents about the lawsuit have leaked. From the document sighted, Tonto Dikeh accused Kpokporgi for refusing to return N2 million he collected from her and threatening to release her nude photos to the public.

The letter read: “From sometime in June 2021, one Prince Kpokpogri Joseph started to court our client with a proposal to marry her. In the process, he would invite our client to his residence and sometimes, he came over to our client’s residence.”

“Unknown to our client, the said Joseph Kpokpogri (who our client later discovered to be a serial blackmailer) had other motives for courting our client.

“Our client now has reasons and evidence to believe that Joseph Kpokpogri has planted closed-circuit television cameras (CCTV Cameras) at private areas of his residence, and had stage-managed those visits with the aim of blackmailing our client.

“She was surprised when sometime in August 2021, the suspect started demanding money from her and threatening to expose nude pictures and other such documents relating to her.

“To actualize his demands, the said Kpokpogri started sending messages, documents, and files containing sensitive information and materials relating to our client to her phone while also releasing some to the public. Our client believes that some of those information were obtained either by wire-tapping her phone and/or through such other means without her authorization.

“The said Kpokpogri equally obtained the sum of eight million naira (8,000,000) from our client under false pretenses. However, he has paid back the sum of six million naira (6,000,000) but has refused, failed, and/or neglected to pay the sum of two million naira (2,000,000) outstanding. Our client’s Toyota Hilux van (2021 Model) bought in her name is also in the custody of Kpokpogri which he has refused to return despite several demands.

“By reason of the above, we urge you to use your good offices to cause a detailed investigation into the above facts with a view to bring Joseph Kpokpogri to book.” 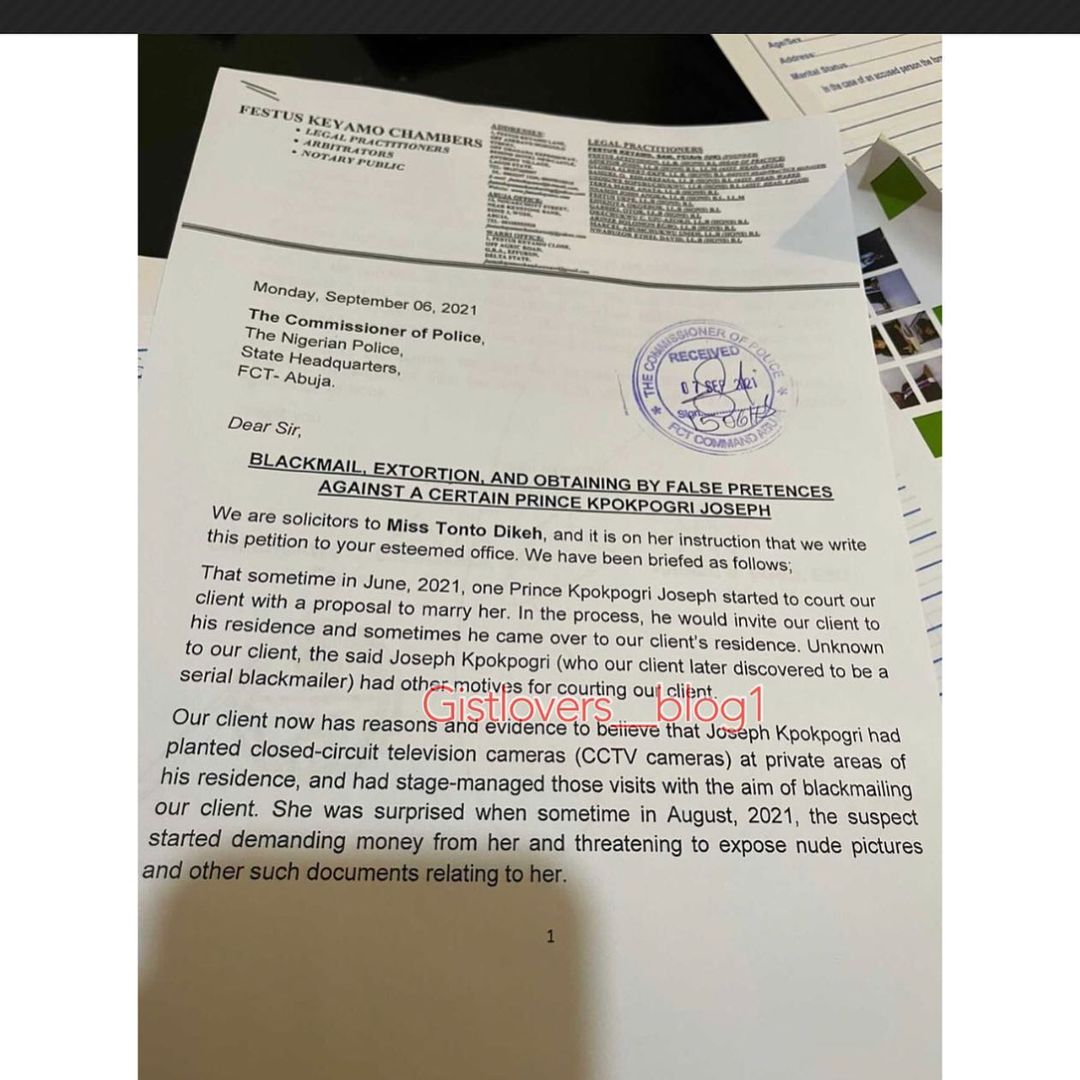 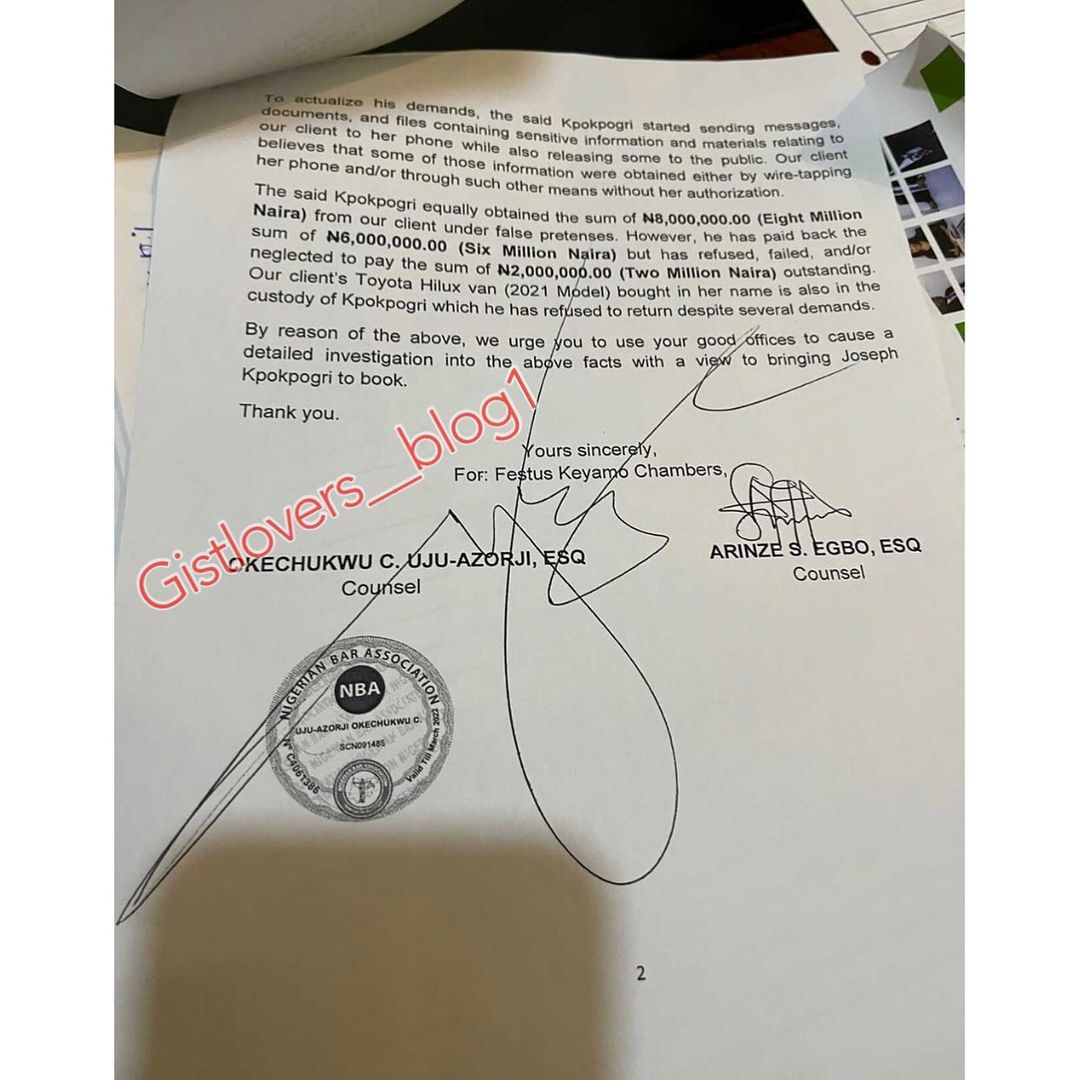 Prince Kpokpogri has gone on an Instagram live session to throw an epic shade at his ex-lover, Tonto Dikeh
Kpokpogri claimed the single mother-of-one is trying to do to him what she did to her ex-husband, Olakunle Churchill.

In his Kpokpogri words ;

“A woman, you rubbished the first man you married, you think you can play the same game with me.”

“You went to go and park my Lexus, a car that I bought of 67 million, in your compound, feeling that you’re bigger than the law.

“If you’re bigger than the law then me, I will equally break the law.”

He also refuted allegations that he was arrested by the DSS after Tonto filed a petition against him.