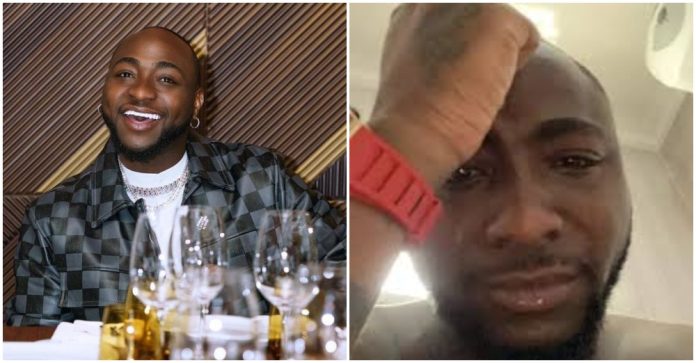 Award winning Nigerian singer, Davido stunned many when he recently disclosed that he cried on his birthday.

The 30 Billion gang originator made this revelation as a guest on Tea with Taymesan podcast.

Davido who lost three of his friends to the cold hands of death in 2021, said: “We lost TJ, my bodyguard who has been my security for over eleven years. We also lost my photographer Fortune. May his soul rest in peace.2021 has been a crazy year.

May their souls rest in peace. We are carrying their legacy on. We think about them every day. From handling that and still working, still having to do what I have to do, going on tours or doing the music recording. Juggling the pandemic and also family matters, 2021 has been a crazy year.We just thank God we are here, we are strong”.

Asked if he has ever had time to pause, reflect and grief, the DMW boss said:

“Life is fast, I have been doing this continuously since I was sixteen years old. Off course I have had to cry, not even about losing my friends alone. I cry about different situations. It comes and goes. I cried on my birthday. I know how bad my grades were. In school, I was like the most unlikely to succeed type of student. My French teacher told me I won’t be anything in this life. I wont lie I was a bad kid with good intentions”.

Below are the names of the friends of

Davido’s personal bodyguard, Ogbeide Tijani Olamilekan, better known as TeejayDMW, reportedly died on Tuesday, December 8, 2020, and the OBO expressed his feelings of devastation about his death on social media.

It was reported that Davido’s bodyguard died as a result of complications from a long-standing diabetes struggle.

Obama DMW, an associate of popular Nigerian entertainer and DMW boss, Davido passed away on June 29, in a hospital in Lekki, Lagos. He reportedly died of suspected respiratory failure.

Davido’s official photographer is the latest member of his crew to join his long list of dead friends. Fortune died on Tuesday, September 22, 2021 after he reportedly drowned whilst he tried to take some better angles during a shoot.