MaDailyGistGet the Latest Gist in Town
More
GOSSIPGet Daily Gist
More
Home General News Why I Am Not Surprised by My Husband’s Death – TB Joshua’s... 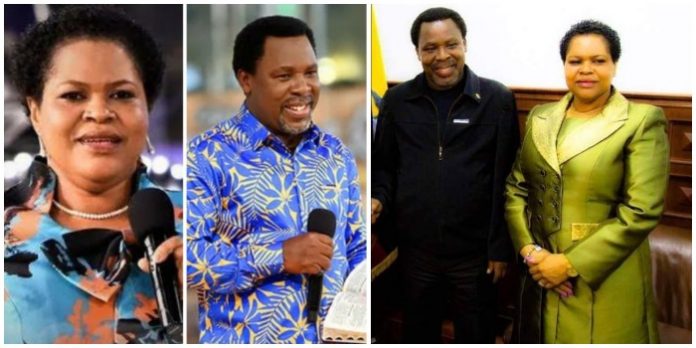 Prophet TB Joshua’s widow, Mrs Evelyn Joshua, says the death of her husband was an act of God and it did not come to her as a surprise. 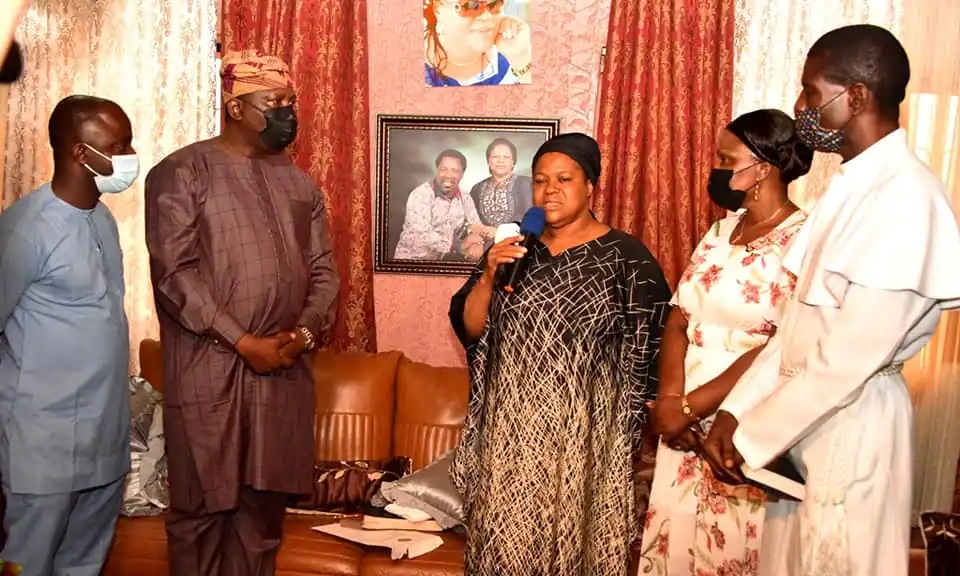 Mrs. Evelyn said this during a visit by a delegate from the Lagos state governor, Babajide Sanwo-Olu, led by the commissioner for home affairs, Prince Anofiu Elegushi. 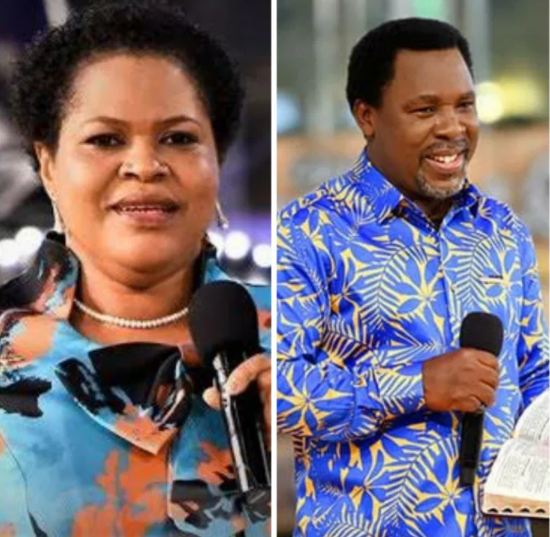 “What happened was an act of God. There is time for everything, like my husband would say. That was the word I knew from him very well. This is the job he was known for. This is what he was living for. That is what he was going to die for. “So, it didn’t come to me as a surprise. I wasn’t surprised when it happened. As we all know, he was in service that day. So, that’s it.”

Evelyn Joshua, also recounted his last moments before he passed away.

According to a source who revealed this information to DAILY POST, Evelyn shared the incident leading up to her husband’s death during a meeting with some foreign visitors.

She stated that Pastor T.B Joshua didn’t show any sign of illness and spent about three hours praying on the mountain before the last service he ministered in.

“He ended the race prayerfully. She revealed that he spent about three hours in prayers before the last service on the mountain and was looking very healthy. She said he never showed any sign of illness or worry and that his main concern was about the prayer line they offered to Indians against the COVID-19 pandemic.

“Afterward, he came up to shower and was left alone to have some time to prepare for service as worship had started. Few Minutes later, he stepped out for ministrations. While ministering, He spoke about a time to come and time to leave.”

“According to her, his statements were spiritual and suddenly, he left the stage and went to his inner chambers. She waited a few minutes and thereafter decided to check on him. And she met him sitting on the chair like someone reflecting but unconscious. She quickly beckoned on his disciples who came and tried to revive him to no avail. Of a truth, he went home to be with the Lord and left us with a message, watch and pray.”

Barrister Evelyn Joshua, the wife of the late founder of Synagogue Church of All Nations (SCOAN), Temitope Balogun Joshua, also reacted about the death of her husband on twitter. 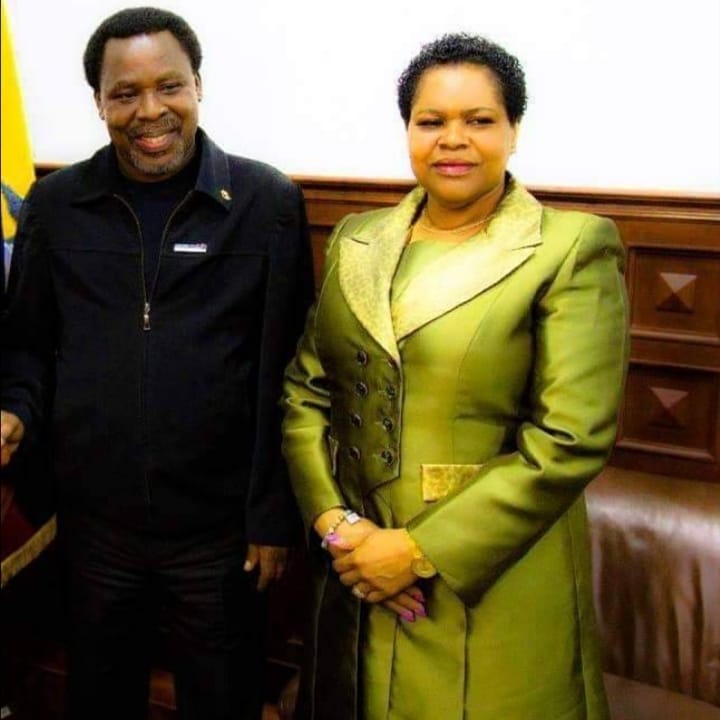 His wife, Evelyn, writing on Twitter, expressed deep emotions over the loss of her husband.

In a tweet on her official Twitter handle, @Mama_Evelyn, pointed out the importance of fellowshipping with God always, stating that only the supreme God can “lessen our heartache and comfort us in these times”. 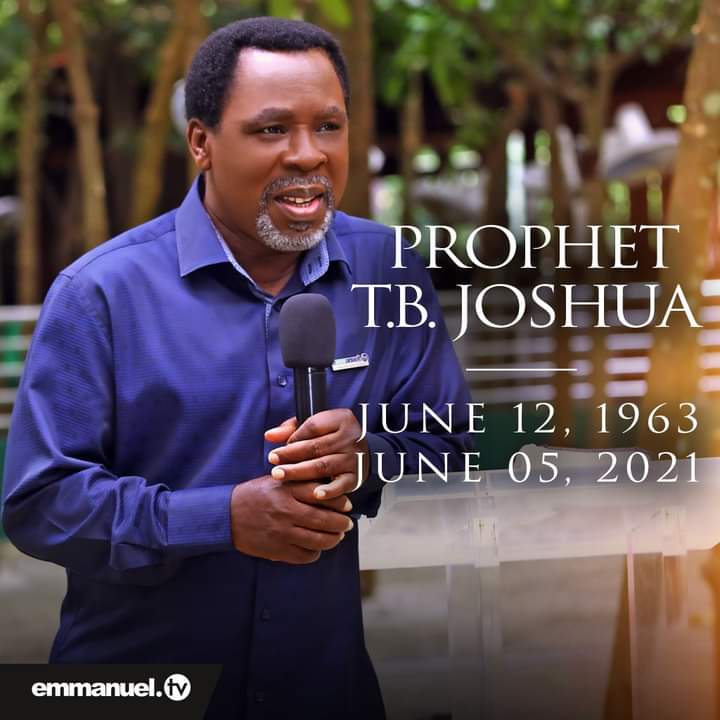 She said, “Losing a loved one is never easy; whether sudden or foreseen. It is always heart-breaking.

“Grief can wreak havoc on our overall well-being. That’s why it’s important to stay rooted in the Almighty.

“Only He can lessen our heartache and comfort us in these times. Seek refuge in him.”

Losing a loved one is never easy; whether sudden or foreseen it’s always heartbreaking. Grief can wreak havoc on our overall well being. That’s why it’s important to stay rooted to the Almighty. Only He can lessen our heartache and comfort us in these times.
Seek refuge in Him. pic.twitter.com/HEpB8Ksgfr

About a week ago, Evelyn had taken to her Twitter page to write, “Faith is trusting and believing that the Almighty has your back no matter what you’re going through. Even when you can’t comprehend what’s going on, you trust Him. You know He will get you out of unfavourable situations. Best motto to live by; do your best, leave the rest to Him!”

Last year, Joshua said he does not put his wife on the spotlight because only God could do so.

“I would have loved my wife to be like me but I cannot make her what I am; it is God. I can’t anoint her; God is the one that anoints people,” he said, adding, “So, it is so difficult for me to display my wife, she has to be ready for God. As much as you are ready for God, God will display you.”

The couple wedded in 1990 and have three daughters together.

This video below from The Guardian’s Daniel Anazia and Jesutomi Akomolafe captures the mood at TB Joshua’s church, the Synagogue Church Of All Nations, in Ikotun, Lagos.