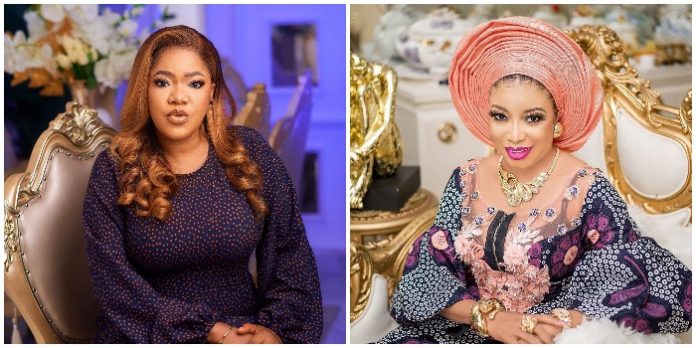 Nollywood actress Toyin Abraham has issued a strong warning to fans instigating the social media drama and fight between her and actress Lizzy Anjorin.

Recall that a few days ago, Toyin, during an Instagram live session with her colleague, Iyabo Ojo broken down in tears as she addressed the fight and some of the roles played by her fans.

In a statement issued on her Instagram page, the actress disclosed that she cannot and will not be held responsible for anyone claiming to be fighting for her while abusing, cursing or calling out’ perceived enemies or colleagues.

The actress refutes claims of sending or supporting anyone purportedly fighting for her, cursing others, and dragging innocent kids in the drama.

Toyin Abraham expressed appreciation to her fans for their love and passion; however, they should not destroy other brands and avoid dragging kids into the drama.

Toyin added that victims of cyber-bullying should kindly pursue it to a logical legal conclusion and make the bully pay for the damage.

It is important I say this at this point though I have said it before and hopefully, this is the last time I want to say this.
I cannot and will not be held responsible for anyone claiming to be fighting for me while ‘abusing, cursing or calling out’ perceived enemies or colleagues.

I saw certain videos on social media of people who purportedly are fighting for me and cursing others and dragging innocent kids into needless drama. Please I am not in any way in support of this. Not once have I ever sent anyone on this type of errands.

Please keep kids out of the drama. These kids will grow up and as they say, the internet never forgets.
I appreciate the love and passion towards me but that is no justification to maim other brands.
Lastly, I strongly suspect that some people are benefiting from this back and forth, (cos, what I watched this evening, video of people cursing colleagues’/ people’s kids is unnecessary and evil) hence the continuous fueling of this tiring drama.
Lastly, if you are a victim of cyber-bullying by anyone, kindly pursue it to a logical legal conclusion and make the bully pay. That is what I intend to do from now on and this is the last time I will be issuing this kind of statement. I just want to focus on the release of my next film, #[email protected] Thank you very much. Toyin Abraham Ajeyem. 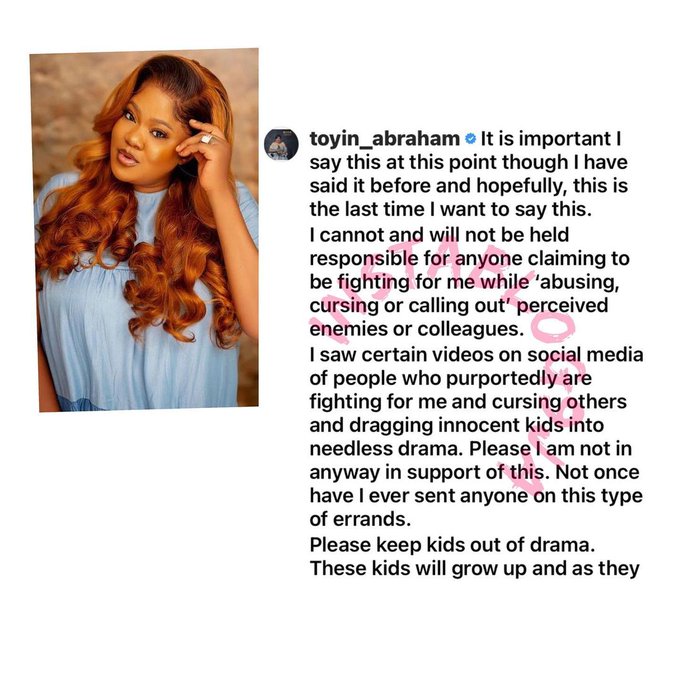 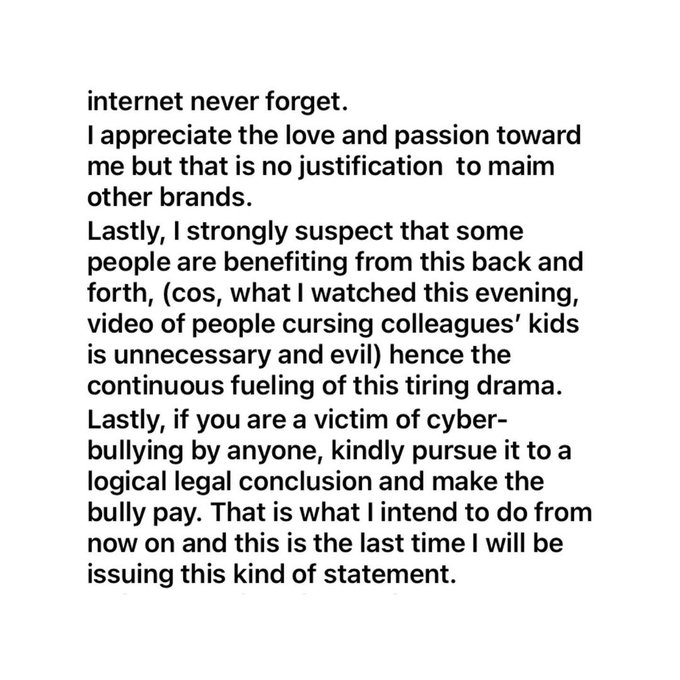 Actress Lizzy Anjorin in a swift reaction to Toyin Abraham’s recent outburst on her son’s well being has dared the media and any one else to release a video or evidence where she cursed Toyin’s son, Ire oluwa.

Recently, the old wound was reopened by social media influencer, Esabod. It appears, during the event, some abusive words were said toward Abraham’s husband and son.

“I did not talk or say anything, but for this, I will stand up for my son. When the incident happened with Liz Anjorin, I did not know about it because it was during that time that I put to bed. They did not let me have my phone because I had just delivered my baby.

“It was after about two months that they gave me my phone and I saw all the messages, and hers was part of it. This is the Holy Bible that I am holding; let the Holy Bible judge me.

“It is so funny because Lizzy is not my friend and I do not know her; Saudi or no Saudi, I have never heard of it. How do I know her movement?”

Abraham further stated that although Anjorin is her colleague in the movie industry, their paths have only crossed twice. She insisted that she had never spilled the beans of her colleagues to any blogger as alleged by Anjorin.

She said, “What is my own with Lizzy. I have seen Lizzy just twice in my life. The first time was at Regina Chukwu’s job and the second time was at Wasilat Coded’s premiere. I do not know about her movement and God is my witness. I have only seen her twice.

“That woman kept cursing my son and husband. You can curse me but do not curse my son. I have never discussed Lizzy’s matter with anyone; we are not friends. God sees me. I have never done that in my life. The reason why I had to speak up is because it is becoming too much and this is my son they are talking about. I have to speak up for my son.

“If I cannot speak up for my son and husband, then why am I a mother or a wife? I have never had any negative thoughts towards anyone.”

Responding via a video on her Instagram page, Lizzy Anjorin in her defense asked anyone with the audio or video of where she ever laid a curse on Toyin Abraham son to release it.