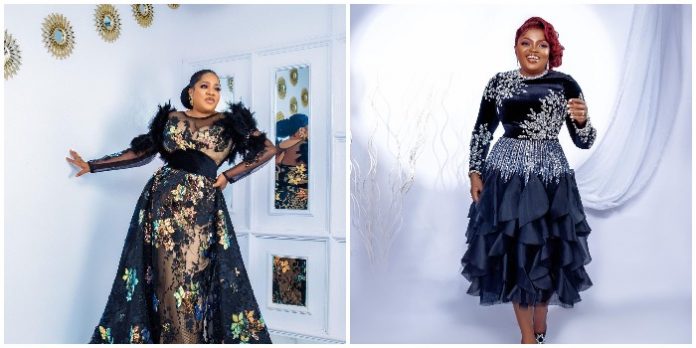 Toyin Abraham has finally reacted to the claims of being in a competition with senior colleague Funke Akindele stressing that she doesn’t care who is doing better than her.

She further wrote “Fam! Happy Monday! Trust we all had a good weekend? I had the most fantastic one! Guess what fam! I beat my last opening record!!!
I’m coming o, just chill small, I’ll soon give you the full gist, but reports reaching me is that the performance this weekend is almost 2x or my previous movie (Fate of Alakada)
Anyways, before I go, today is a great day to achieve your own dreams! Never give up and have a blessed day. Don’t forget to go and watch The Ghost and the Tout TOO! Showing across ALL cinemas in Nigeria! #IAmMyOwnCompetition #OpeNiFOluwa”

TRhe likes of Kate Henshaw, Uche Jombo, Yul Edochie positively reacted to the post as seen in screenshot below:

For sometime now, there have been speculations that actors Funke Akindele and Toyin Abraham are not friends as they always shun each other on social media during birthday, wedding anniversary, premiere and other celebrations, but a new move by Funke Akindele has sort of now confirmed the rivalry.

The talented actresses who have not been on good terms, refusing to attend each other’s movie premier and other functions began their acting career in the Yoruba movie industry and have in recent times, made their mark on the silver screen. They are arguably, no push overs when it comes to interpreting movie scripts to the letters.

Recall that their rivalry became pronounced after Toyin Abraham recently released a sequel to her one movies, The Ghost and The Tout which premiered on the night of September 5, 2021 ahead of its official release date slated for September 10, 2021 and interestingly, Funke Akindele who completely shunned Toyin’s movie poster also fixed the same date, September 10 for the release of her Omo Ghetto the Saga movie on Netflix.

The rivalry grew wings over the weekend when Iyabo Ojo accused Funke Akindele of paying a popular movie critic to run down Toyin Abraham’s movie.

“Not Recommended for intelligent people. Over the years, we have told you many truths but non Greater than this: Intelligent minds were not taken into consideration at all in the writing and in the making of ‘Ghost and The Tout Too‘.
Thusly, intelligent minds will not enjoy it at all.
Regardless of how flagrantly it copycats off ‘Ómó Ghetto: The Saga’ desperately hoping to shine like it. Unlike that one ‘The Ghost and The Tout Too’ doesn’t understand that movie-making is rooted in brain-work and not in using cinema to do “Yahoo”, abusing stardoms to fleece fandoms.

If you are intelligent, you are better off staying back home this weekend to watch ‘Ómó Ghetto: The Saga,” part of the critic’s review read.

Well, obviously this didn’t go down well with Toyin Abraham, her friends in the industry and some of her fans.

Iyabo Ojo also accused Funke Akindele of being full of jealousy and negativity, adding that The Ghost and The Tout 2 will surpass Funke’s Omo Ghetto: The Saga.

“How much did Funke pay you to write this rubbish? The day she begins to find ways not to talk to bad about her fellow colleagues or discredit their work or personality, that day she will begin to experience inner peace,” Angry Iyaba Ojo fumed.