MaDailyGistGet the Latest Gist in Town
More
GOSSIPGet Daily Gist
More
Home Celebrity/Entertainment Tiwa Savage reveals why she is telling her son about the leaked... 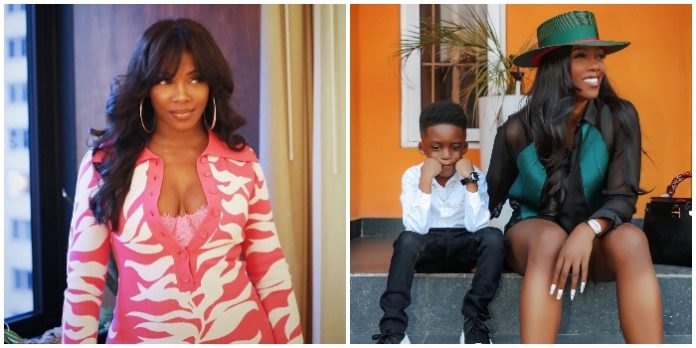 Singer Tiwa Savage has disclosed how she is preparing to open up about her ongoing s3x tape scandal to her son, Jamil so he doesn’t get mocked for it later on.

In an interview with with Angie Matinez on Power 105.1, the single mum of one and singer Tiwa Savage said “There is a dark side to being in the limelight…the video was recorded three weeks ago, it is the person i am currently dating….I won’t allow anyone blackmail me for something that is natural…

I am sharing this because i want to control the narrative…this is an intimate moment with someone i am dating…he is more concerned about me, my mom and son having to see it, i am going to talk to my son later on when he is about fifteen, so I’m going to brace him up ahead so no one tries to insult him when playing say your mum did this…i feel a little bit embarrassed…”

Amidst being dragged for her sex tape, sensational female Nigerian singer Tiwa Savage has bragged about her damage control.

Recall that Tiwa Savage, in an interview with New York’s Power 105.1 FM revealed that she’s currently being blackmailed over a sex tape with her current lover.

Tiwa Savage’s shocking revelation left many people with several reactions after they pointed many discrepancies in the interview.

Tiwa Savage, in a post shared on her Instagram story, has however knocked the anonymous blogger who released her s3x tape, for being able to control the narrative of the alleged sex tap before it consumed her.

Tiwa Savage also bragged about making a joke on stage with the sex tape that would have destroyed and ashamed her.