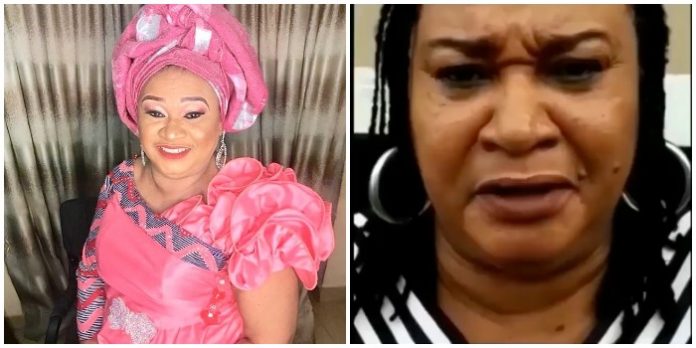 A leaked video of veteran Nollywood actress Rachel Oniga speaking about her death a few weeks before she passed on has sparked outrage on social media.

In the video making the rounds on social media, the actress spoke about being scared to die, and she considered many thoughts about her life and children.

Rachel Oniga spoke about a state of not being able to breathe, and all her thoughts were about her children as she had looked forward to them settling down and getting married.

The actress also expressed fear of not making it till the end of the year and not being a grandmother.

The video sparked outrage on social media as netizens pointed out how the actress was only confessing negatively to her life.

kellstosin wrote: Life and death lies in the tongue! Be careful what you wish and pray for! Rest in the lords blossom!

timmygredefined wrote: The tongue is powerful, be mindful of your say with it

oluwatimilehin wrote: This is unbearable so sad

Recall that the family of the late veteran actress confirmed the cause of her death, stating that she died of health-related issues, not COVID-19, as earlier speculated on social media.

Rachel Oniga was announced dead on Saturday and local reports had speculated that she died of COVID-19 complications.

Revealing the true cause of her death, her family released a statement titled ‘An official statement on the passing of Chief. Rachel Tabuno Oniga,’ signed by her sister, Toyin Odusote.