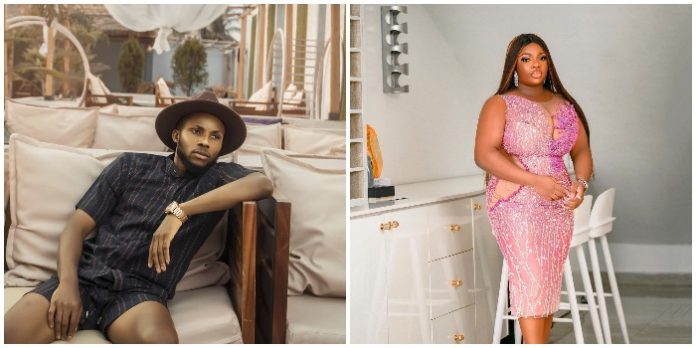 BBNaija star Brighto has revealed why he didn’t bother speaking to Dorathy after she gave him BJ as he discloses what actually happened to him.

Dorathy in yesterday’s episode of the reunion accused Brighto of not speaking to her the next day after she gave him BJ and that made her feel sad making her get out of the triangle with Wathoni to be on her own.

Brighto at that moment didn’t say anything to defend himself but has now come out to reveal what exactly happened to him after Dorathy gave him a BJ and that is the reason why he didn’t bother to speak to her the next morning.

According to Brighto, Dorathy gave him a BJ and the next morning he had a swollen d*ck, therefore, he didn’t speak to her or said anything to her the next morning because of his swollen D as that might have scared him.

Brighto claimed it took him so much to accept that BJ from Dorathy and waking up the next day only to realize that he has a swollen d*ck got him freaked out and that might possibly be the reason why he didn’t speak to her.

Some netizens think Brighto’s explanation now isn’t needed or necessary since he didn’t say anything at the reunion to defend himself but only get quiet and refused to take responsibility for anything that happened between them. 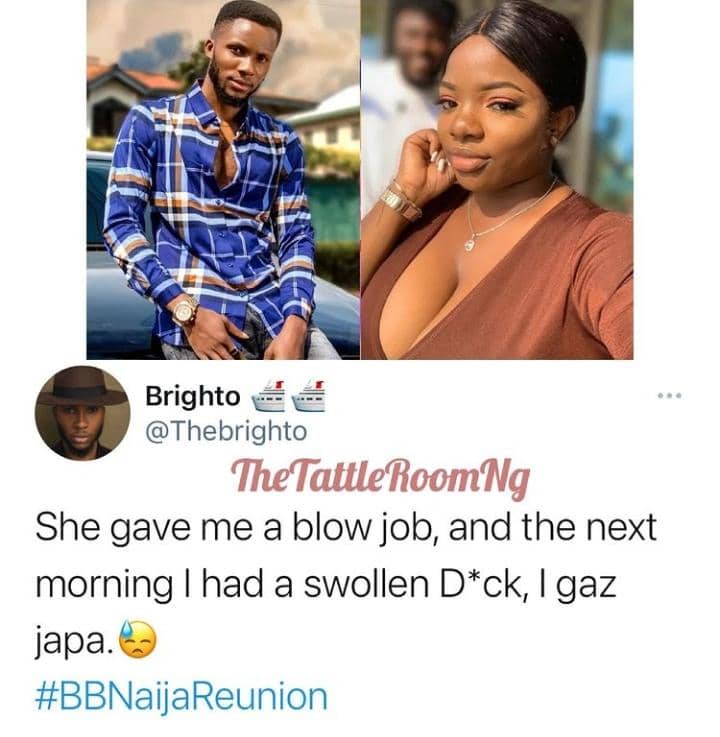 See some reactions below ;

Victor wrote ; After the information embedded in TERMS AND CONDITIONS, I can beat my chest and say this is the next most useless piece of information ever known to mankind. The Pot you used to turn semo in the big brother’s house is actually Brighter than you are. My Friend will you Getawt!

Omotayo wrote ; Bright you are already vindicated, you dont need to thread this path to prove any point tbvh, women will always be woman, you are a man please act like one, dont sspoil the gentleman game card you already displayed at the reunion, take this down pls

Maris wrote ; He would have addressed it at the reunion, he didn’t have the balls to do so now he’s coming online to say thrash. I wouldn’t blame the lady for saying all she said, imagine after having an intimate moment with someone and the person acts like you don’t exist afterwards, it hurts

@debornair99 : “This right here doesn’t make any sense, you didn’t have to tweet at all, you had W , but now take your L”

@4lLaycon  “Brighto you actually don’t need to tweet ds tbh. People have been hailing you since last night but ds tweet right here from you is a no no..”

@wbamzyoriginals “With the kind of likeness I have for Brighto, guy you just lost a fan So unnecessary”

@kofoworola__a “Your name is Brighto but you are not bright o”

@Tee_Classiquem1 “Bright you are already vindicated, you dont need to thread this path to prove any point tbvh, women will always be woman, you are a man please act like one, dont sspoil the gentleman game card you already displayed at the reunion, take this down pls”

@liddieberry “What level of immaturity is this? Goodness”