Home General News Slay Queens arrested and handcuffed after ‘man who brought them to a... 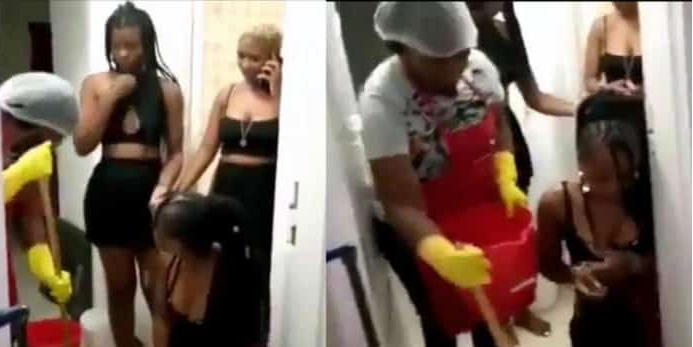 A group of slay queens were reportedly arrested at a popular hotel in Ghana after the man who brought them fled without paying the bill accrued.

It was gathered that a man had invited the three ladies to the hotel for hookup, meanwhile after they whined and dined the man secretly left the hotel, leaving the ladies to settle the bill.

A video serving rounds online has captured the moment the beautiful ladies were arrested at the popular hotel. In the video, the ladies were placed in handcuffs as they had no money on them to settle the bill since the man who brought them has fled.

Atinka News reported that while in handcuff, the women continued to argue among themselves as to who is to blame for their ordeal.

In spite of the argument, they reportedly could not come up with the amount needed and neither could they produce the man they came to the hotel with.

In reaction to the video, an Instagram user wrote, “Imagine getting cuffed and disgraced after getting knacked…😮na wah o”.

“On a normal day who brought them in is the person that lounge them you guys have business with not the ladies it’s the careless of the receptionist or the manager that make the man to leave the hotel premises without paying his bills. All the blames should be on the waiter, receptionist, manager and the security”.

@mmakamba_0 wrote, “Why them no carry vex money na”.