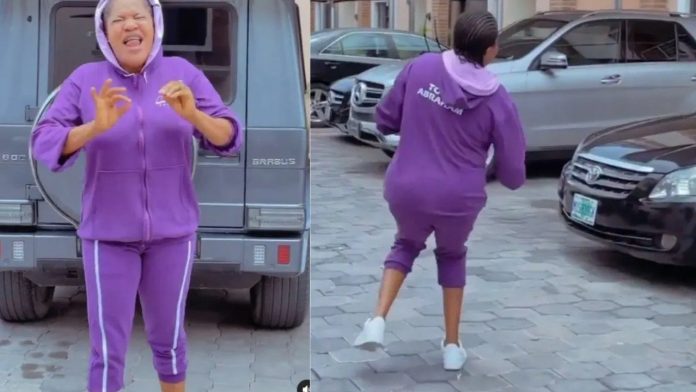 Fans of Nollywood actress, Toyin Abraham have mocked the mother of one after she shared a video of where she was running.

In the video, Toyin was seen creating awareness for a marathon even happening in Lagos and she decided to rehearse for the day buy running a few miles.

The ‘Alakada’ crooner who was acting all funny got lots of her followers laughing with some of her displays.

Toyin’s ‘Skinny’ legs in the video could not be ignored and some of her colleagues and followers decided to call her attention to it.

See the video below;

@debbie_shokoya wrote “Is This How You Want To Run”

@nikkitaity555 wrote “This woman is a comedian”

@marshkatj06 wrote “Ure just a clown! Why are you running to. Yeyenatu”

Meanwhile, Toyin Abraham was captured in a video showing that she really cares about friends and loved ones.

We can deduce from the video that she can really go to the extreme just to ensure that her friends and loved one are safe and sound.

In the video, she actually drove to from her house to break the door of her stylist out of fear that she maybe in danger.

The stylist is Tolu Bally and she took to her Instagram story to share how the actress broke down her door after she thought that she was in danger.

Per what the stylist said, Toyin called to tell her that she would be in her house in few minutes. However, when she got to Tolu’s house and called her phone, the phone kept ringing and no one answered.

The actress ‘sensed’ danger as she decided to do the needful by breaking down the door. Tolu was heard saying in the video;

“So, I spoke with Toyin Abraham earlier today and she said she would come to my house in a bit but I slept off immediately. And if you know me, my phone is always on silent. She got to mine and my security who saw me drive in from church was very certain I was at home, also because my car was parked at the garage. “Toyin was so scared I wasn’t picking my phone or answering my door so she broke my back door.”