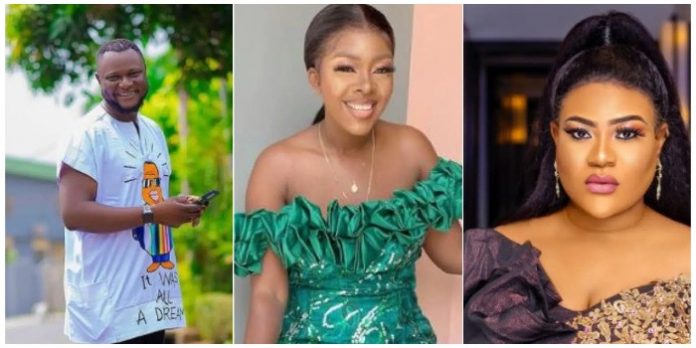 Controversial Nollywood actress Nkechi Blessing has continued to rant over the report alleging she snatched her colleague’s boyfriend, Kiitan Bukola.

We earlier reported that an Instagram blogger, Gistlovers, alleged that Nkechi Blessing crashed the relationship of Kiitan Bukola and her lover Olu Micheal.

The blogger said Kiitan has been dating the man since 2019 who has been lashing her with money and acquired a house for her, but they broke up after Nkechi Blessing started dating the man.

According to the blogger, Kiitan Bukola had gone to a movie location, and upon her return, she met Nkechi Blessing in her boyfriend’s house, which leads to the crash of their relationship.

The blogger also alleged that Bukola Adeeyo and Debbi Shokoy also got involved in a romantic relationship with Olu Micheal as he bankrolled her recent movie ‘Olugbeja’. 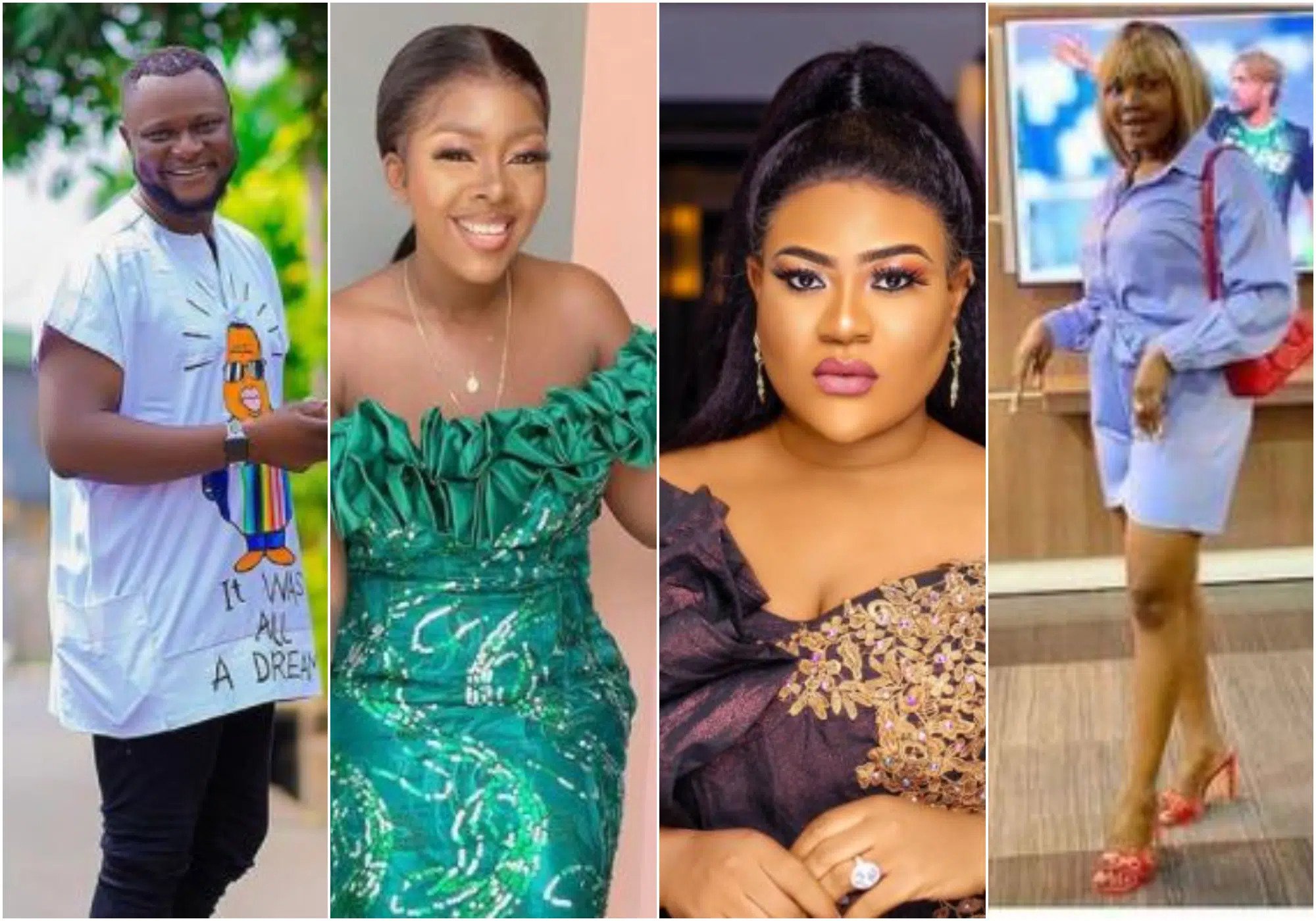 Hello tueh tueh,This is a Tale of How Nollywood girls turn Popular Hardened scammer to Ball and was sharing him About and collecting the money he made from scams from him.

Kiitan started dating Olu Micheal since 2019 and they were knacking partner too,she was supplying the knacking and Olu was supplying her money,she is a proud Landlady now ,what made them broke up was Nkechi

Nkechi:NBS on the other hand don hear gist say Olu Micheal Dey settle kiitan well well,so when Kiitan went for a movie location,Aunty NBS don pack go The boda Olu house and they’ve been staying together for like a week,when Kiitan got back and met Nkechi for her ATM MACHINE(Olu)House,she got angry and Nkechi was already to pick a. Fight with her,but she left the venue angrily and later called throw shade at Nkechi in a lengthy post which we posted back then (2019)Nkechi sef collect her own money then back to back before he moved to Bukola Adeeyo and friend

Debbie:That one too is on Olu’s list,he is part of those who bankrolled her new movie olugbeja Olorun,Debbie who was with Sharaadeen olabode before and one other martini guy,don change direction o when him see Olu,olu ise fraud money take knack all of them round

Yetunde ana Peju Johnson are also his customer dada ni,this and many more is how he lavished the money he defrauded the general public,some Big Aunty in the industry is also on his but their matter now he now,,but for now let’s concentrate on how he will refund people,failure to do so,his parent and family details will be posted online so all the whole world can behold a thief ,this is how the Mr 419 use prick take shift all these nollywood geh o.All his brand ambassador will be dragged alongside until he pays all his victim ,Hand go soon touch am too,i come in peace,igi ewedu oni wo pawa o 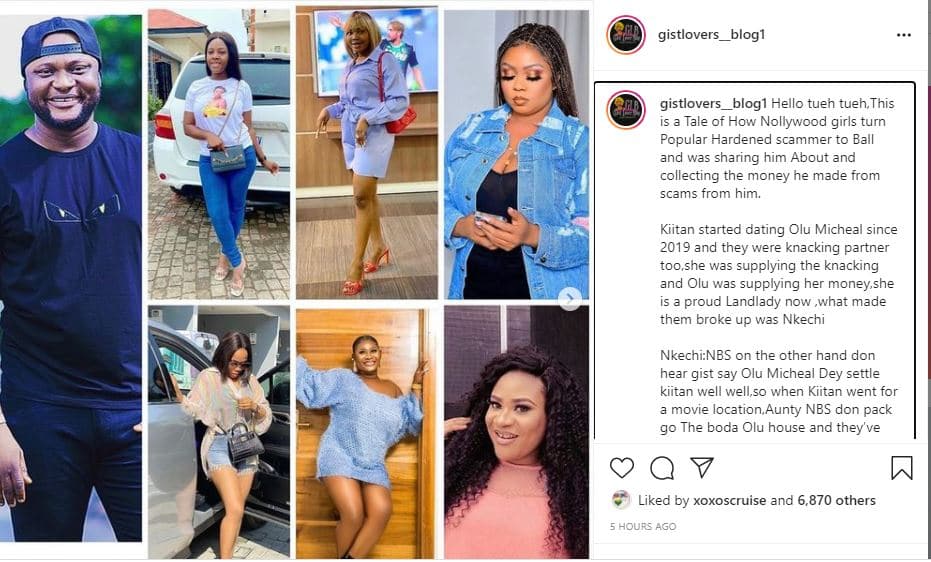 In a new post on her Instagram page, Nkechi Blessing, who seemed unbothered about the news, said people should believe whatever they hear about her.

She said people could also add their side of the story because she is currently focused, and nothing can distract her.

She wrote: Believe what ever you heard about me,Kindly Add your own if possible. over here we stay FOCUSED.

Recall that Nkechi Blessing in a post shared on her Instagram story, denied romantically being linked to the Kiitan’s boyfriend.

Nkechi Blessing said whatever a grown-up woman decides to do with her life should not be anybody’s problem describing the blogger as jobless.

She said people should believe the report to their detriment, describing it as an uninformed piece of garbage.

She wrote: Olofo is bored again no news to keep his jobless followers active. What grown-up woman choose to do with their own life is your own problem.

Your witchcraft or wizardry no dey hide again…Na people wey dey believe your rubbish I pity…uninformed piece of garbage…Arindin. 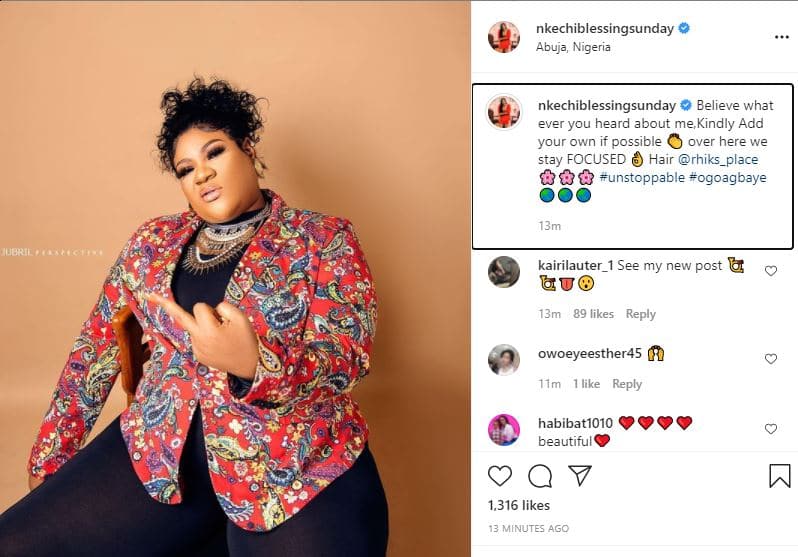