MaDailyGistGet the Latest Gist in Town
More
GOSSIPGet Daily Gist
More
Home Celebrity/Entertainment My Classmates Thought I Was Dull Because Of My grades, But I’m... 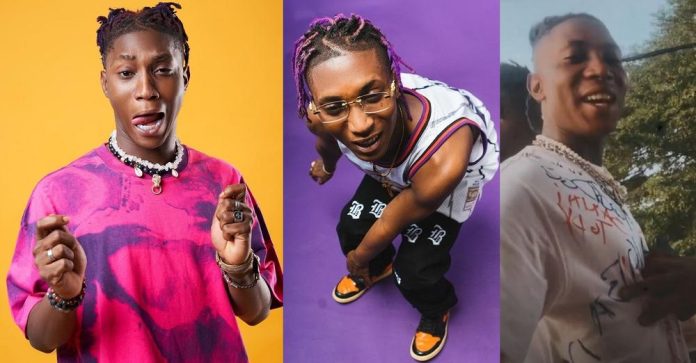 Popular Nigerian singer, Akinbiyi Abiola Ahmed, better known as Bella Shmurda, has boasted about being richer than his peers despite not performing well academically..

The vision 2020 crooner in a chat with Pulse admitted that his academic setback made him who he is today.

According to Bella, who recently graduated from Lagos State University, although he was not a dullard as many people thought, it’s possible he wouldn’t have become the music star that he is today if he had focused more on his education.

Speaking further, the ‘sho mo mi’ claimed to be richer than all the course mates who graduated with him in the same set. Watch the full interview below;

A while ago Bella Shmurda took to social media to celebrate signing out from the university. He shared videos of him celebrating with his mates while they took turns to sign on shirt.

“Four years in LASU is really nothing…but I don do my own comot”, he wrote in a subsequent post.

In other news, Peter Okoye, one half of P-Square has finally revealed what culminated in his sudden sickness ahead of the group’s first major concert in December since their historic reunion.

In a new Instagram post, Perter informed fans of the P-Square brand that the pressure that came with back-to-back studio sessions and rehearsals just to satisfy their fans took a heavy toll on him. He posted;

‘’It’s been a challenging couple of days trying to power through immense pain, fever and general body weakness.

We were very excited about giving you an amazing show on the 18th, Unfortunately, my body has taken quite a beating with several intense rehearsals back to back and studio that it just couldn’t take it any more and I have had to give in to Dr’s orders to get some rest, build back my strength to get to optimum health.

The first thing I did was take a coVID test and thankfully my tests came out *negative* for coVID.

I’d like to thank my brother @iamkingrudy, my family and team for holding it down while I get through this.

The good news is, we will make it up to you and give you a truly amazing show on Christmas Day – Saturday, December 25th !

If you’re a ticket holder, the wonderful team @livespotx will send you an email with updates and options.

The show will go on and we can’t wait to see you there. Look out for electrifying performances from P-Square, some of your faves and more.