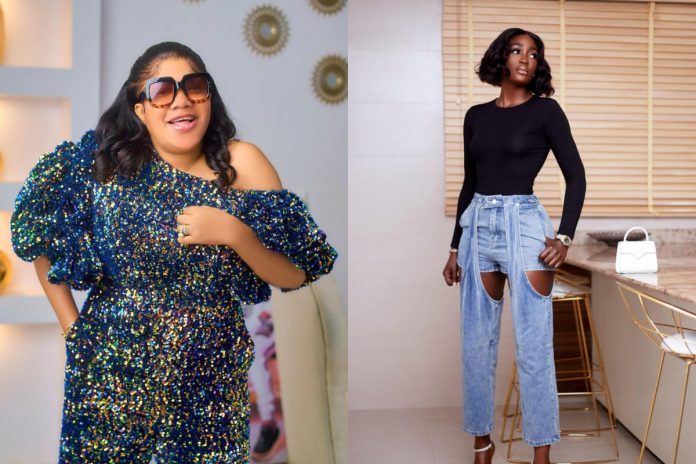 Popular Nollywood actress, Toyin Abraham has been captured in a video showing that she really cares about friends and loved ones.

We can deduce from the video that she can really go to the extreme just to ensure that her friends and loved one are safe and sound.

In the video, she actually drove to from her house to break the door of her stylist out of fear that she maybe in danger.

The stylist is Tolu Bally and she took to her Instagram story to share how the actress broke down her door after she thought that she was in danger.

Per what the stylist said, Toyin called to tell her that she would be in her house in few minutes. However, when she got to Tolu’s house and called her phone, the phone kept ringing and no one answered.

The actress ‘sensed’ danger as she decided to do the needful by breaking down the door. Tolu was heard saying in the video;

“So, I spoke with Toyin Abraham earlier today and she said she would come to my house in a bit but I slept off immediately. And if you know me, my phone is always on silent. She got to mine and my security who saw me drive in from church was very certain I was at home, also because my car was parked at the garage. “Toyin was so scared I wasn’t picking my phone or answering my door so she broke my back door.”

Meanwhile, Toyin Abraham engaged in a war of words on Instagram with fans that did not find her newly released movie, The Prophetess, funny.

Recall that the much anticipated movie, The Prophetess which was produced and directed by Niyi Akinmolayan and stars Toyin Abraham as lead cast, premiered last weekend and started screening today at the cinemas nationwide.

Upon seeing the movie today, a popular movie critic on Instagram, Cinema Pointer described it as thrash, “Not Recommended. Chaotic and noisy, ‘The Prophetess’ is One Hundred and Forty Four minutes of nonsense.”

Reacting in anger, Toyin Abraham took to the comment section of the post and blew hot “I can bet my life that you’re someone in the industry that does not like me cause I’m doing great and you cannot stop me. Any movie I act in or produce, you always trash it. I’m sure you thought I produced prophetess but no I didn’t produce, I only acted in it. I have my audience and market, I keep feeding them. My darling, making 130 million during the pandemic and end sars is not a joke and being number one on Netflix for weeks is not a fluke. Prophetess is about Nigeria, for Nigerians and made by Nigerians, (Mr Niyi Akinmolayan)and you say bad things about it. Cinemapointer, whoever you are and whoever paid you, I leave you to your conscience. And lastly, like I said, I am a brand and I know my market and I willing never stop feeding my market. Peace and love.
NB: we won’t bribe your the way others are bribing you, so keep saying trash; but let God judge you. If you want me to really believed your reviews, my darling show your face.”

As expected the comment generated mixed reactions from fans, while some of them applauded her, some others mocked her.

One of them wrote “Truth is always bitter and just because you think you are a big brand doesn’t mean you are above criticism. When you produced the first Alakada Reloaded, they gave you Mildy Recommended and when you produced The Ghost and the Tout again. Cinema pointer gave you Recommended and even commended you of stepping up your game. I guess you were happy then. Now that you have been producing thrash and taking advantage of all your loyal fans, that is when you now think the person behind this page doesn’t like or love you. Madam go and sit down somewhere. Just stop producing now and concentrate more on your acting. No doubt you are a good actress but you even do too much lately. Just take the review and work more on your next production. Just my 1kobo advice.”

And in response, Toyin Abraham said “Guess what, I am here to stay, Iyalaya gbogbo yin…” 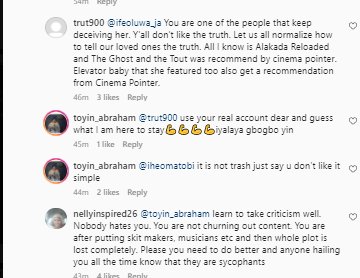 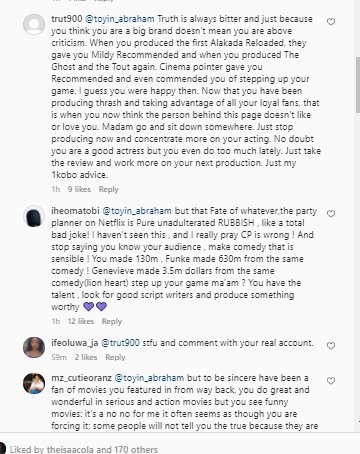 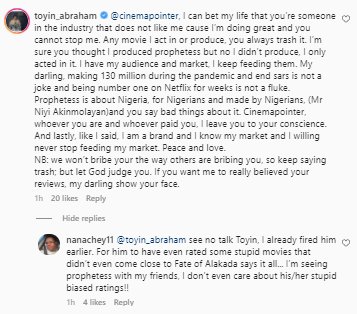