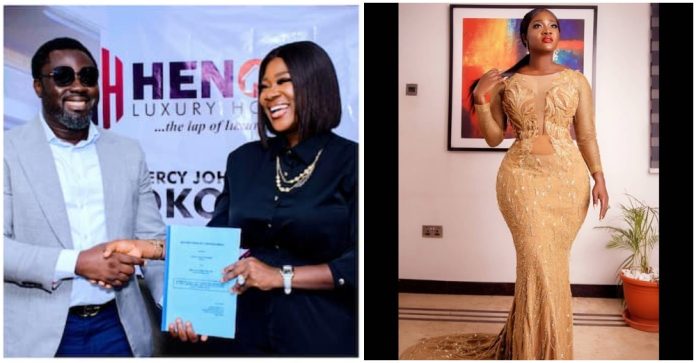 Actress Mercy Johnson-Okojie secured an endorsement deal with a real estate company and she got herself a lovely home.

In some photos sent to Legit, the film star and her husband Prince Okojie were spotted with big smiles on their faces as they posed for the camera.

They also held a book where the agreement between the real estate company and the actress was signed. 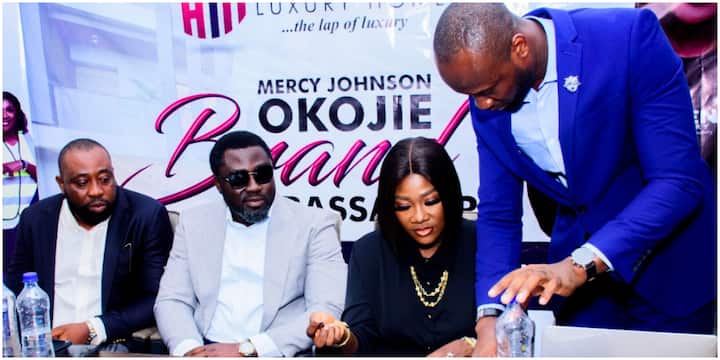 Meanwhile, A lot of celebrities often find themselves struggling between keeping their personal lives away from social media and giving their fans, supporters sneak peeks into what it looks like without the glam.

Luckily, some of these people have been able to strike a balance and it is interesting to note that a family portrait or random homemade videos does the trick for quite a number of these superstars. 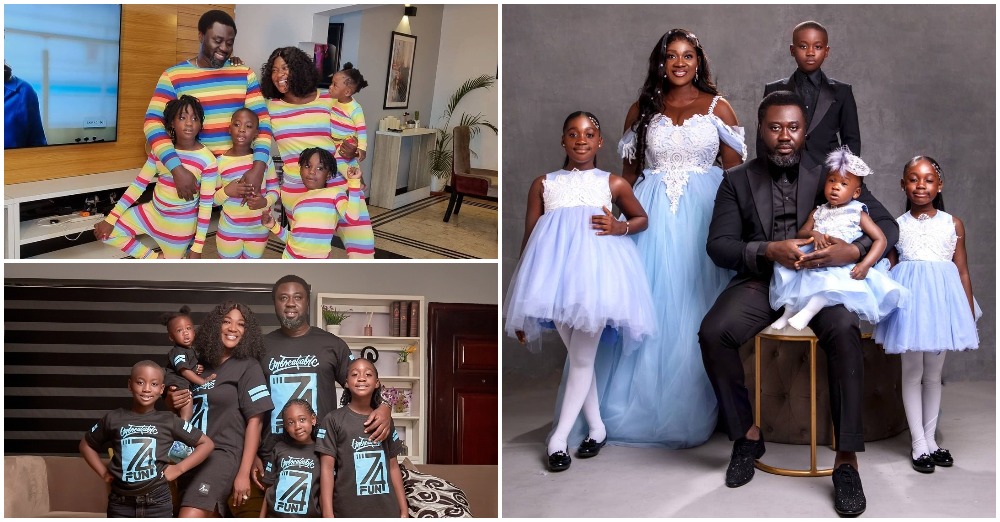 The likes of Omotola Jalade Ekeinde, Omoni Oboli among others are known for occasionally coming together with those in their households for adorable family portraits.

Well, we focuses on a much-loved film star, Mercy Johnson-Okojie, as we compile photos and videos that tell a story of what the movie star’s 2021 looked like.

1. The family comes together for Purity’s birthday in December 2021

Mercy and her family members came together to celebrate the birthday ceremony of Purity.

The family members all appeared in high-moods in a video shared online.

2. Mercy and her kids spotted during their holiday in November 2021

The movie star sent her fans and followers into a hilarious state with this video post.

According to her, the kids got her to join them because they had finished exams.

3. The family during Henry’s birthday in October 2021

Mercy and her family members had yet another birthday celebration in October after Henry clocked a new age. A video of the Okojie’s stirred sweet reactions online.

4. Mercy out and about with her children at the airport in September

The actress and her kids were spotted striking a post at the airport. Mercy didn’t share all the details as she told her followers that it was a long story.

5. Mercy and her kids spotted during her wedding anniversary in August

Mercy and her hubby were joined by their kids in August for a cute family photo. The couple celebrated their wedding anniversary.

6. The Okojie’s during a swimming pool hangout in July

July was packed full with fun activities for the family. One video shared online captured them spending time by the poolside.

7. Pillow fight at home in June

Mercy cracked her fans up with this video shared in June. Apparently, she decided to get into a pillow fight session with her kids.

8. The family spotted together for a lovely portrait in May

May saw the family coming together for another lovely group photo. Fans and colleagues couldn’t stop gushing over them.

9. Pyjamas April was an unforgettable moment!

April saw Mercy joining her ids for the pyjamas challenge. They were all spotted rocking similar PJs in a photo shared on IG.

10. Mercy and her kids take over the kitchen in March

In March, Mercy dragged her kids to the kitchen. A video spotted on her IG stirred different reactions.

11. Valentine’s Day was a goal in February

To kick-off the Valentine’s month, the family rocked red outfits on the first day of February 2021.

Mercy and her family members started the year in style. A cute video post shared on IG saw the family ushering in the new year.

Mercy and her family members have no doubt had an amazing 2021. Their heartwarming pictures, videos put smiles on the faces of fans and supporters throughout the year.