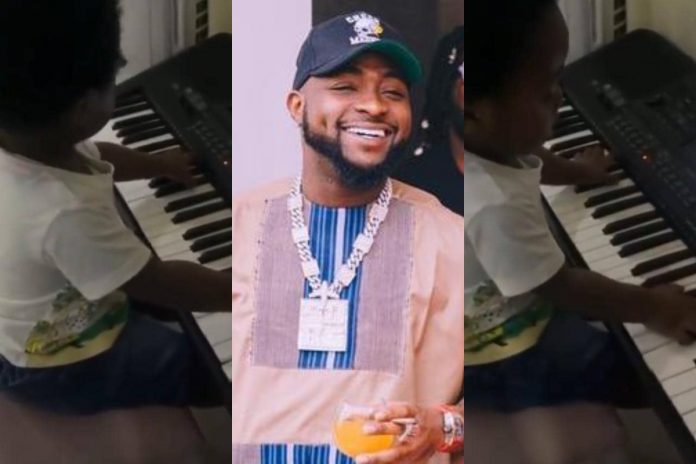 Singer Davido has disclosed that his kids make him happy as he shares a hilarious video of his son Ifeanyi playing the piano with his hands and legs.

Davido shared the video of Ifeanyi making everyone’s day with his style of playing the piano by adding his leg and even his father was just amused with what he was doing hence laughed at him while sharing the video.
From the posture of Ifeanyi while playing the piano, it’s obvious he has started learning at a very young age which is very good but he spoilt the whole thing when he added his leg at some point in time and that is what made almost everyone laughed.

Davido after sharing the video disclosed that his kids really make him happy when he watches them do their own thing and we all know how kids get hilarious at some point when they see their parents around after a long while.

Davido tries his best to have that father-child moment with his kids no matter his schedule and the relationship he has with their mothers because the happiness and safety of his kids come first to him, unlike some fathers.

This video of Ifeanyi that Davido shared shows that now Chioma has allowed him to see their son as it was rumored some time ago that she had refused to let Davido see their son after they had a little misunderstanding.

Reacting to this video;

@verah_marshall wrote “How do these children grow these days na. Wasn’t it just yesterday they named him. Cute baby boy”