The reports that Nigerian singing sensation, Tiwa Savage‘s sex tape was leaked online was literally a topic that trended for weeks, right after she first gave the revelation that someone was trying to blackmail her with it.

Recall that the mother of one had in an interview, revealed that someone was threatening to release her sex tape with the lover she’s currently dating, except she paid a ransom. She however, didn’t oblige the blackmailer but chose to define the narrative herself by putting it out there first.

Well, days went by and the singer went about her business, with netizens stealthily disregarding the matter after so many reactions. The singer then later performed at an event in Lagos recently where she revealed that no one was going to get to watch the tape… but only hours later, a sex tape featuring a face that supposedly belongs to her, was leaked online.

The emergence of the tape ignited the controversy once more with fans, netizens, followers and colleagues having a thing or two to say about the development — for some reason, or probably in a bid to console the songstress, some celebrities saw the opportunity fit to refer to her as their “queen”; an action that would agitate a lot of people online.

Her estranged husband, talent manager, Teebillz also reacted to the development… he didn’t condemn his baby mama, as some might have expected, giving their history but instead cautioned people on the kind of circle they keep.

Well, in the latest development and possibly one that everyone had been waiting for, the embattled entertainer has finally reacted to the whole saga and as it seems, she’s not necessarily perturbed with the defamation of her name.

In a recent post on her Instagram page, Tiwa Savage shares a quote and ends it with a devil faced emoji and this singular action, has once again had tongues wagging, only this time, a number of people might find closure on the saga.

She wrote, “Charge that shit to the game n never speak on it again”…. 😈 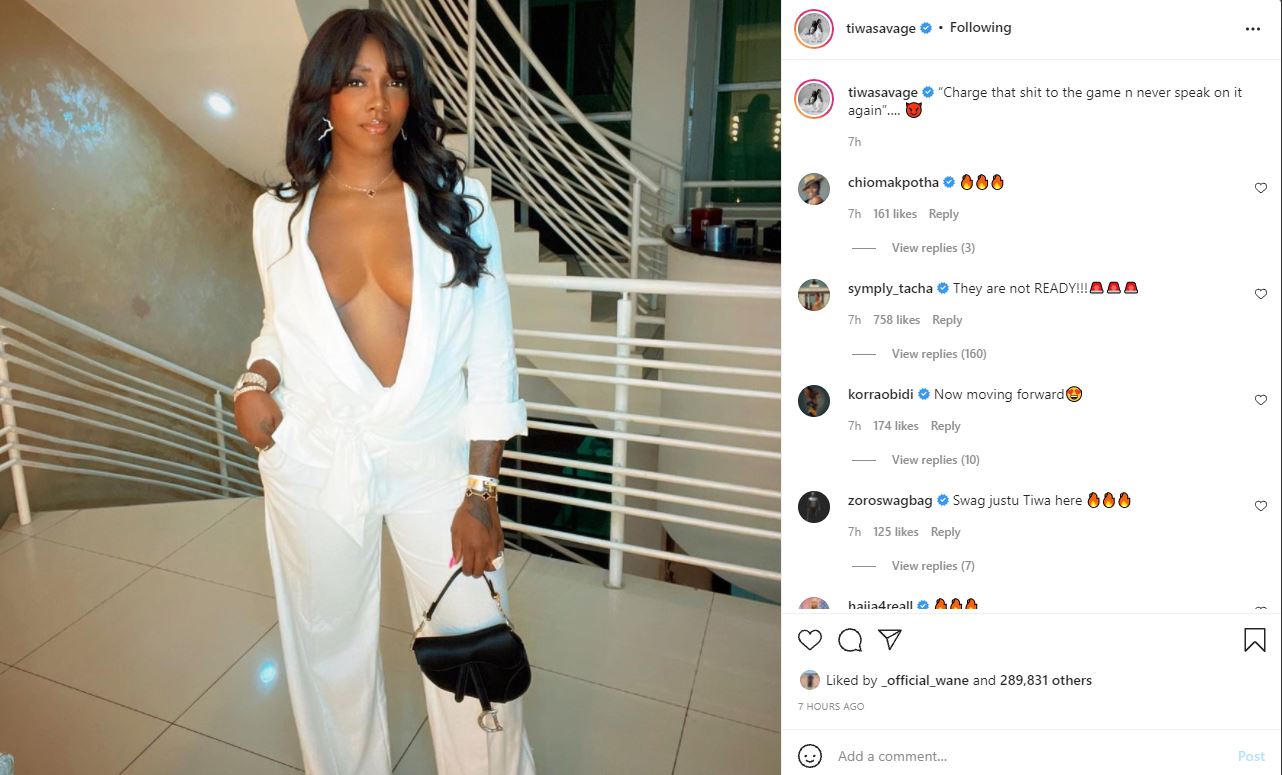 As expected, there’s been varying reactions in the comment section of her post, but most of it is clouded by ardent fans who are professing their unconditional love for her.

She also shared a video and wrote:You know the vibes #somebodyson