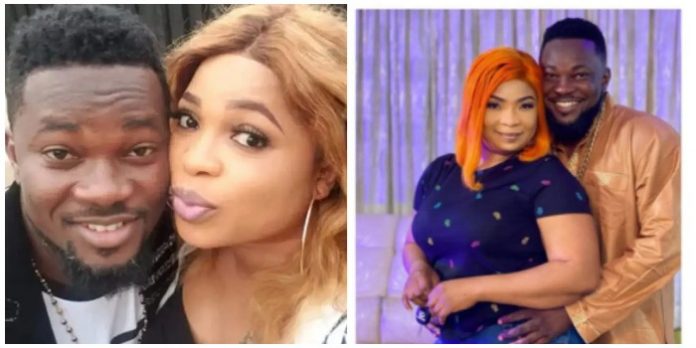 Actress Laide Bakare has released a press statement via her Instagram page, addressing the recent claims that she is fighting her bestie and colleague, Kemi Afolabi over a junior colleague, Gida.

Recall that on Friday, August 27, Kemi Afolabi ranted on Instagram about her twinnie turned enemy as she described her as being delusional, crazy and an attention seeker.

And in response, Nollywood actress, Laide Bakare wrote “No matter what hatters say or do. Can never ever reach ME, Abi eleyi Fe Te ni ? Who you be? #laidebakare is your forefather MOTHER, I’m too Big for some kin nonsense, miss wereyy. Who be your Twinee?? Alaye baje … You wey be like Man!!!!”

Debunking the claims, Laide Bakare moments ago wrote on Instagram: 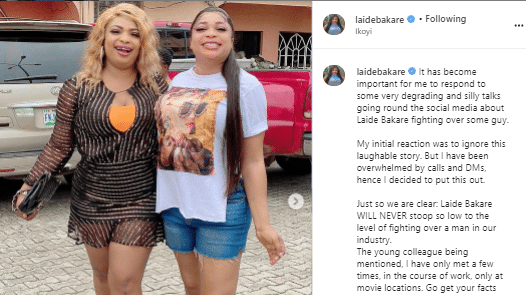 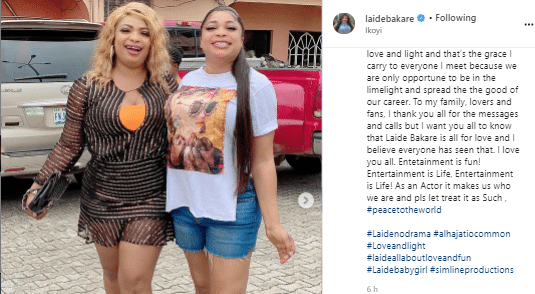 “It has become important for me to respond to some very degrading and silly talks going round the social media about Laide Bakare fighting over some guy.

My initial reaction was to ignore this laughable story. But I have been overwhelmed by calls and DMs, hence I decided to put this out.

Just so we are clear: Laide Bakare WILL NEVER stoop so low to the level of fighting over a man in our industry.
The young colleague being mentioned, I have only met a few times, in the course of work, only at movie locations. Go get your facts rights. IT WILL NEVER HAPPEN.

For the records, what I did recently was to respond to a female colleague that called me out rudely on social media instead of calling me over the phone personally . This fight over man stories are completely silly!

I’ve been in this industry for too long not to know my onions. Everyone knows I move and relate with everybody like we’ve known forever and that’s the kind of love I carry around, because I don’t discriminate.

You’d never see me claiming seniority in this industry even to those I brought in or trained because I believe God just used me as tool to project their career.

This will be the last I’d say about anything concerning anyone who thinks we are fighting. I am all about love and light and that’s the grace I carry to everyone I meet because we are only opportune to be in the limelight and spread the the good of our career. To my family, lovers and fans, I thank you all for the messages and calls but I want you all to know that Laide Bakare is all for love and I believe everyone has seen that. I love you all. Entertainment is fun! Entertainment is Life, Entertainment is Life! As an Actor it makes us who we are and pls let treat it as Such. Peace to the world, Laide No Drama, Alhaja ti o common, Love and light, Laide all about love and fun, Laide Baby Girl.