MaDailyGistGet the Latest Gist in Town
More
GOSSIPGet Daily Gist
More
Home My Story “I feel bad sleeping with my boss last week but I enjoyed... 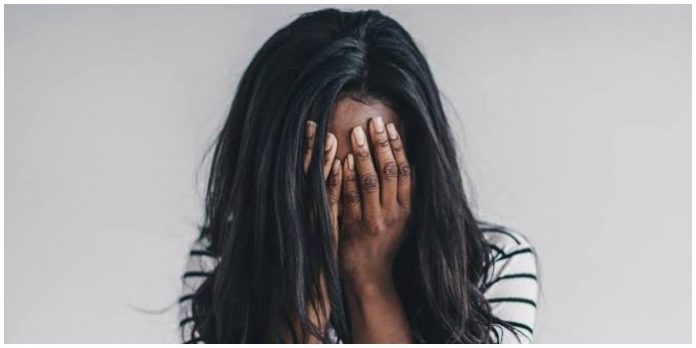 A Nigerian lady has narrated how she’s at cross roads with her guilty pleasure after sleeping with her boss, whereas she has a boyfriend.

According to the lady, herself and her boss engaged in the act at the office and after she was done, she went home to meet her boyfriend and a feeling of guilt erupted in her as her boyfriend also had sex with her on the same day. 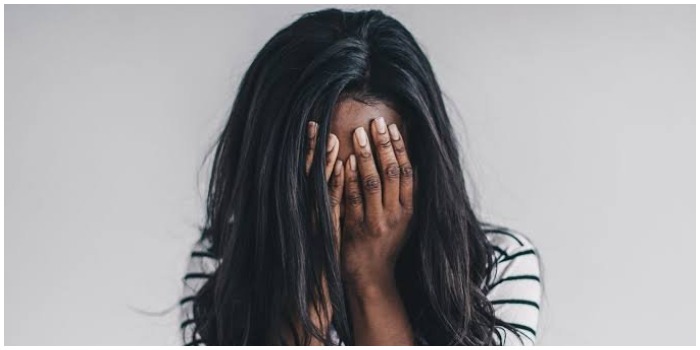 The lady wrote to relationship blogger, Joro Olumofin for advise.

Read her story below,

“Good afternoon; I feel so bad. I slept with my boss last week. It happened so fast, I couldn’t resist him. He came inside me, I use tissue to remove some of sperm in the office toilet. Am on my safe period too. when I got to my place my bf called that he is outside. He started having s*x with me.

I didn’t want to say no because he will suspect I never reject him. He gave me head, I felt bad because my boss sperm was still inside me. I have been crying.

I have been avoiding my boss but I want more. I feel so bad. How will I leave this. Am now wearing skirt. God help me Joro my bf don’t deserve this” 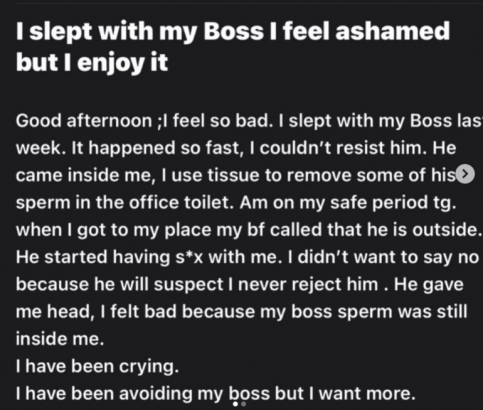 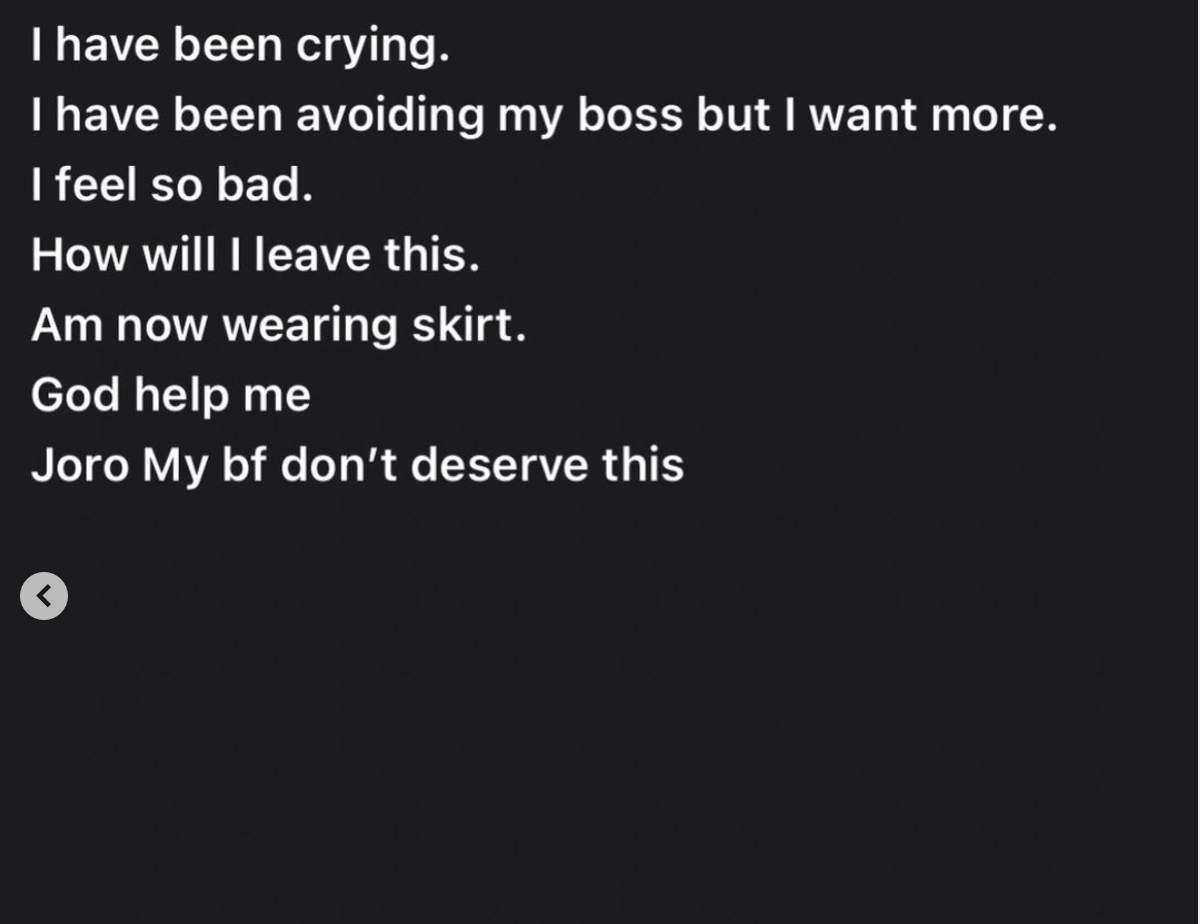 Read some reactions from social media users below;

tejiriella – Why u no tell ham say u wan bath first ? na u purposely do ham? u for go bath and wash everything first

wholesalesbags_byboss – Leave God out of this madam. ??

vee_anniiee – I don’t understand the ‘I’m now wearing skirt’ part… is it for easy entry?????

toripoonky – Your boss will surely blackmail you thou. Hope you know

odsnaturals – When the headline itself makes the writer confuse, blasting is allowed as the best response.

In another news, a young guy took to social media to share how his girlfriend who has an identical twin, switched places with her twin at night so he could be sleeping with the two of them in turns without knowing. 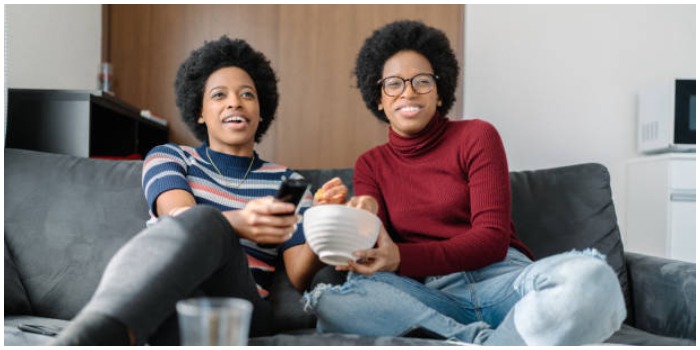 The gentleman revealed this during a discussion which prompted twins to reveal the best switches they ever pulled.

“I once dated a woman with a twin. I don’t know why but they got in their mind that they will switch places so I will end up having s*x unknowingly with her twin.

So one night, I’m already in bed and she turns out the light to make it harder for me to realize their trick and makes up some last second excuse to leave the room. A minute or two later I hear (what I assumed was her) coming back into the room and climbing in bed beside me.

So I slide down over and we start making out. We ended up having some mind blowing s**. It was incredible. I’ve never gotten such passion from my girlfriend.

At some point in the night, they’d switch back so when I woke up my girlfriend smiled at me and asked me if I enjoyed it, I explained to her I’d been onto them the whole time.and that I knew it wasn’t her from the very start. She looked at me very shocked and asked how I’d known. I said “your hands are smaller than his”. 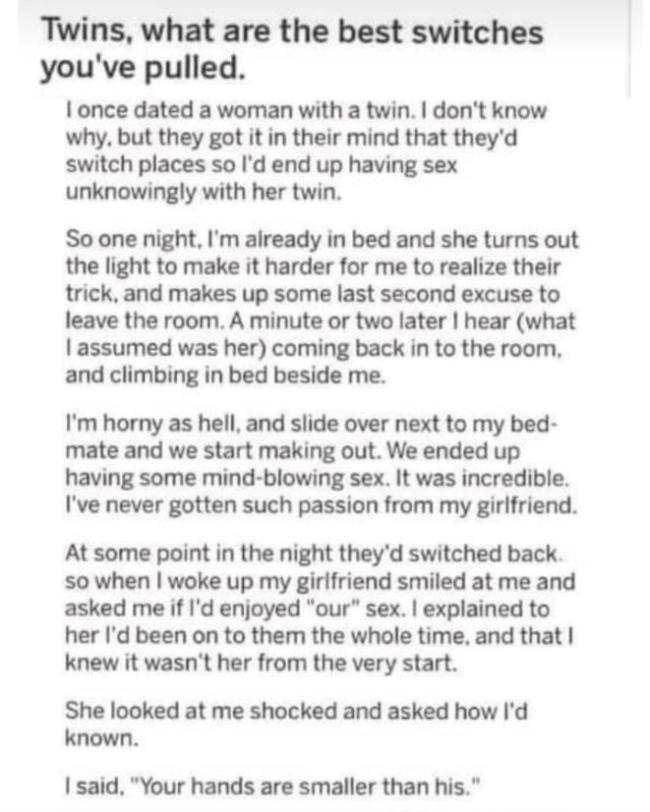