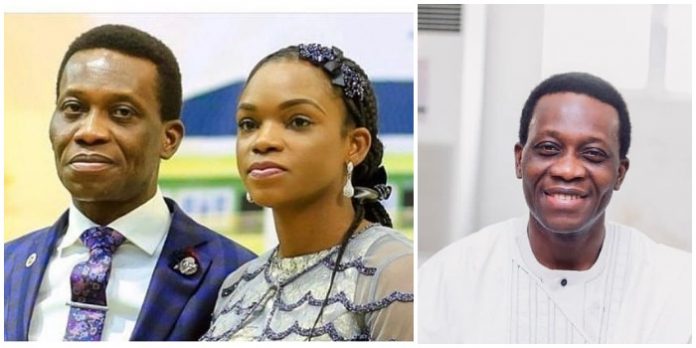 Early this month, the family of Pastor E.A Adeboye, the G. O. of Redeemed Christian Church of God, RCCG was thrown into mourning following the death of Dare Adeboye, his second son.

Late Pastor Dare Adeboye reportedly passed on in his sleep a day before the official announcement. He had retired to his bed and asked not to be disturbed after getting home from church. He retired to his bedroom, slept but did not wake up on Wednesday.

According to inside sources, it was when his wife, Temiloluwa noticed her husband’s unusual sleeping hours and could not reach him on the phone that she raised the alarm and he was discovered dead.

Inside sources revealed that after the wife suspected something was wrong, she promptly called for help and men of God from all over joined hands in prayer for God to revive his son.

It was a select group of renowned prayer worriors that stormed the private residence of late Pastor Dare Adeboye in Eket, Akwa Ibom where he was based. They evoked the spirit of God, and pleaded to God with prayers not to take his son away from them. They were all drenched in their own sweat as they shook the heavens with prayers. But it was all too late. The Lord had spoken and his will alone would be done.

Popular gospel musician, Nathaniel Bassey, also confirmed this in his condolence message. The musician made it known that before Dare Adeboye’s death was announced to the world, it was known within the inner cirle and they prayed, danced to God for a miracle to happen but it didn’t, the Lord close to have his way this time.

He wrote “I have held back from sharing this because I still hoped for a miracle. And to think we flew together to Uyo last week, sharing and talking about ministry and the kingdom is most shocking to me.

Yesterday We prayed, danced, praised believing & hoping for a miracle because God sure works miracles. But it wasn’t to be. No doubt God is able and faithful. Practically seen Him raise the dead lately. And even now I believe He can.
However, I also know that precious in His sight is the death of His Saints.

So why we are here sad and mourning, heaven is agog with joy and celebrations at the arrival of a saint.

Our brother, and fellow soldier, Pastor Dare Adeboye, is in a far better place. With no bandits, kidnapping, terrorism, corona virus, economic hardship and intrigues. He lived the God-life. And has gone to join the host of heaven cheering us on. For we win. Head or tail.

We trust The Holy Spirit, our standby, strengthener and comforter to minister to our Father in the Lord, DADDY GO, His immediate Family, The RCCG and the entire body of Christ at this time. It is well.”

Also, it was gathered that when the sad news got to Daddy G.O. who was believed to have gotten premonitions about the event before he was told. Pastor Adeboye promptly left the house and went to a secluded place within the Redemption Camp to seek solitude with God.

By the time the news filtered round the camp and social media, there was reluctance to broadcast the story, as Daddy G.O’s Redemption Camp resident was clustered by concerned sympathizers who wanted to confirm the authenticity of the report.

By the morning of Thursday, May 6, 2021, the curtain had fallen on Pastor Dare Adeboye. The rumour became a reality. The mighty has finally embraced the cold arms of death and made his pass into the great beyond.

About 2 am on Thursday, Daddy G.O. was seen coming from seclusion into his residence as the mammoth crowd who assembled at his house paved the way for his passage. According to one of the waiting sympathizers.

Pastor Adeboye had in 2020 described Dare as his first miracle child. The respected clergy while celebrating his son’s birthday said God put the devil to shame 42 years ago when Dare was born. He prayed for the celebrant and also prayed that those seeking a miracle from God will receive it.

“Our first miracle child. We pray that God will keep his miraculous working power in your life and all those who need a miracle today, will use you as a point of contact for their own in JESUS’s name. (Amen) love from Dad, Mom, and the whole Adeboye dynasty.”

Confirming the sad development, a top shot in the RCCG family said: “Shock. Disbelief. Tears. Thanksgiving. Praise. Total submission to the will of God. Pastor Dare’s death is painful, unexpected but who dares to question, God?”