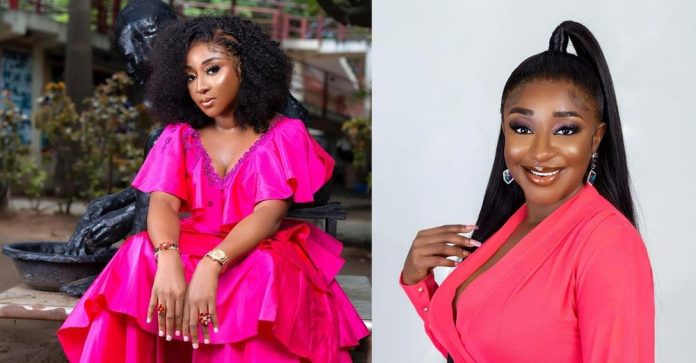 Nollywood Actress, Ini Edo has been chided by a Nigerian writer for her choice of having her child through surrogacy.

Ini’s eggs were fertilized by a sperm donor but the writer feels Ini has made a big mistake taking that route.

The writer went on to add that it is a great thing to have a real father and everyone deserves one.

Read his epistle below ;

“Ini Edo HAS JUST CREATED A BIG PROBLEM FOR AN INNOCENT CHILD”…..
I like Ini Edo very much. If for nothing at all, I enjoyed watching her movies when I was growing up as a teenager.
She is a very beautiful woman. And she is talented as well and interpreted her movie roles beyond perfection, hence my likeness for her…..
I often won’t comment on the lifestyles of many Nigerian and Ghanaian celebrities because I feel they’ve every right to live as they please once they are not breaking any public laws or posing as enemies of the state…

But I am commenting on this particular issue because I saw so many of our youth praising her online for the wrong reason.
So to educate them, I have to explain certain things to them so they do not repeat such a big mistake like Ini Edo has just done…
I read in the news today that she (Ini Edo) has birthed a baby girl through surrogacy and she is very happy about that. Well, I am happy for her too as a fan…
Congratulations to her. But she committed a blunder I will like to point out to her….
I understand the plight of women who have tried everything possible to have their own children but cannot. It’s depressing and soul-crushing.
I always sympathize with them and encourage our men to treat such women with so much kindness because they need it to keep them truly alive.
To be barren in Africa is not easy. People will judge you from left and right without knowing how you truly feel as a woman who wants your own child or children.
Some of these women with such problems , in their quest to get a child by all means, try different things including surrogacy, especially those of them who are privileged or quite okay in life…

It’s not a bad thing to have a child through surrogacy if you’ve problems with your reproductive system or having an issue getting pregnant or, in a case where getting pregnant and giving birth poses a threat to your health…

But my only problem is that Ini Edo has created a big problem for this innocent baby when she grows up to understand how things work in life…
Of course, Ini Edo deserves to be happy, but let’s not forget that the innocent child deserves to be happy too, in the future when she grows up to understand what’s happening around her….

She birthing the baby through surrogacy is not the problem as I keep saying,
but her decision of using a random or an anonymous “donor sperm” is my problem with her. Yes, the Eggs are hers and so genetically the baby is her blood.
But who is the baby’s father? Where is he? From which family background? Is he a Ghanaian, Nigerian or a South African? What is his identity?
Who is her surrogate mother? Where is she? The woman that suffered to carry her nine months in her womb!…
These are very relevant questions Ini Edo and her friends might be overlooking, but this innocent child will ask these same questions some day when she needs fatherly love and care.

This baby will go through a lot of psychological problems and mental tortures looking for who her father is and the woman that carried her for nine months in her womb.
Do you think that it is easy to live without knowing your father in an African society?

If you grow up as a child and ask about your father, and you’re told that he’s dead, you’ll understand because you’ll see his pictures and his family…
But for Ini Edo to tell the child that “I don’t know your father. ‘It was an anonymous “donor sperm” with my egg that another woman carried for nine months for me’, will make the child the most miserable person on earth. She may even commit suicide if she is not strong emotionally….
Worse of it all, is if Ini Edo doesn’t live long enough to see this child grow up as an adult. Who will be her family? Ini Edo’s brothers and sisters? Too bad….
It’s not the best to have a child through surrogacy with a random or an anonymous “donor sperm”….

Ini Edo could’ve made her boyfriend or any man she admires donate his sperm for this baby since she’s not ready for marriage.
But to say that she doesn’t want any “baby daddy drama” that’s why she chose a random “donor sperm” is only showing her level of selfishness or childishness….
She doesn’t truly care about how the baby will feel when she grows up…..

She just cares about having a baby to please the society or to prove a useless point to people who don’t like her or people she doesn’t like. Too bad. I pity the innocent baby…

Other women who may want to have children this way should do with a man they like so that the child can also have and know their father….
It’s a great thing to have a father. And everyone deserves one… 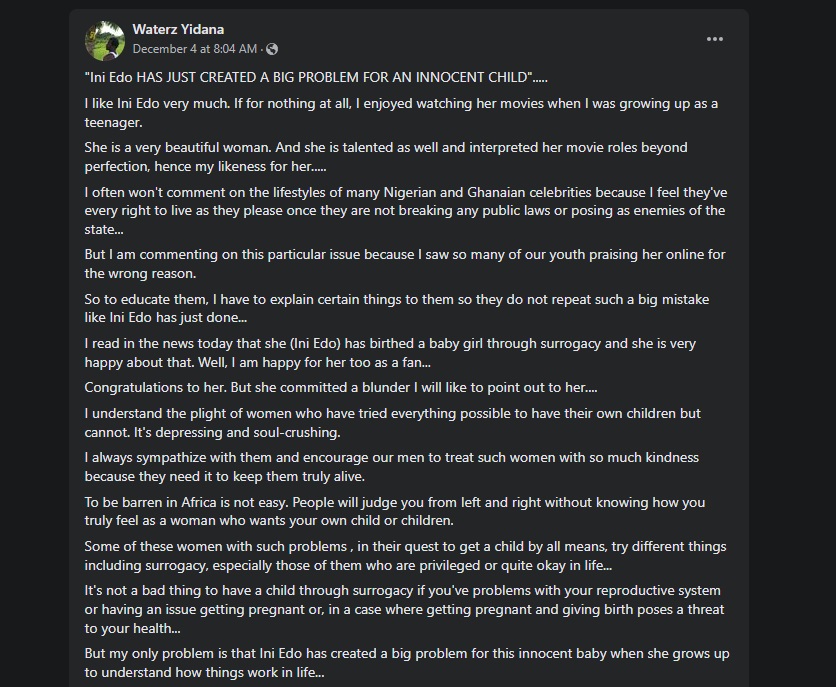 Debunking claims that her sperm donor is a random person, Edo wrote in her Insta-stories:”My daughter’s donor isn’t just a random person.Doesn’t make him any more than a donor.Now y’all can start to focus on what is really important in this country and leave us the hell alone”.

Reacting to her statement, a certain fan @Royaldiva1 said:”She really doesn’t owe anyone an explanation”.