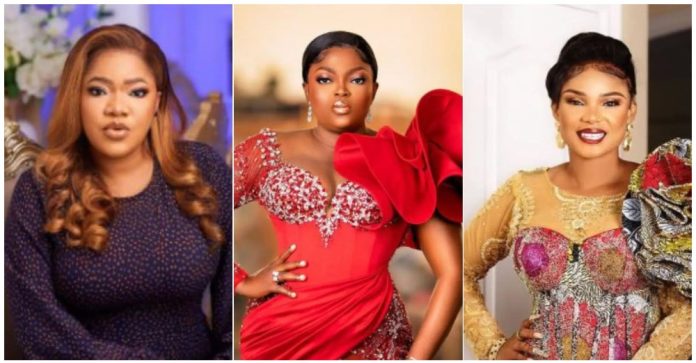 Nollywood actress Funke Akindele on Thursday shunned the 20 years on stage celebration of his colleague and best friend, Eniola Badmus.

This is no surprise to many fans considering Funke Akindele’s beef between her colleague Toyin Abraham and Iyabo Ojo.

However, many people feel the friendship between Funke Akindele and Eniola Badmus is one-sided, as the latter would not ignore Funke’s party over issues with her colleagues.

Funke Akindele was visibly absent at the party but shared photos and a video of Eniola Badmus celebrating her huge milestone in Nollywood.

According to reports, Funke Akindele was at home with her family and couldn’t go to the event bearing in mind that Toyin Abraham and Iyabo Ojo would be there and avoid any drama.

Recall that Funke Akindele and Toyin Abraham usually shun each other on social media during birthdays, wedding anniversaries, premieres and other celebrations.

The outstanding actresses, who have been feuding and refusing to attend each other’s movie premieres and other events, began their acting careers in the Yoruba film industry and have made their mark on the silver screen in recent years. However, when it comes to interpreting movie scripts to the letter, they are arguably no pushovers.

Coming after Toyin Abraham recently released a sequel to her one movie, The Ghost and The Tout which premiered on the night of September 5, 2021 ahead of its official release date slated for September 10, 2021.

Funke Akindele also announced the release of her Omo Ghetto: The Saga movie on Netflix on same 10th, September.

To make matters worse, popular Instagram acclaimed movie reviewer, Cinema Pointer, rubbished Toyin’s movie and in the same post, advised her followers to sit at home and watch Funke’s movie via Netflix instead.

The post generated a lot of reactions and backlash from Nigerian celebrities and fans. Iyabo Ojo publicly accused Funke of Paying the blogger to pull down Toyin.