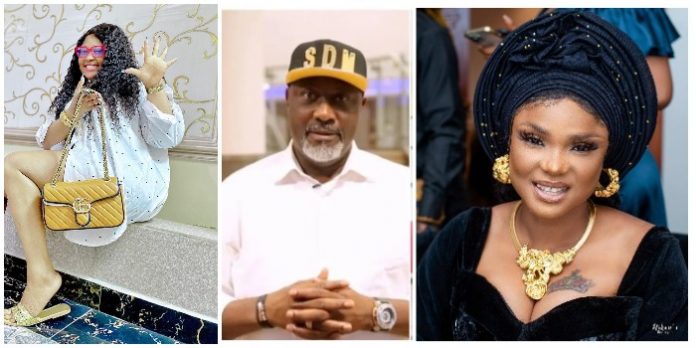 Recall that in 2020, Iyabo Ojo and Dino Melaye made headlines over their alleged relationship and were reportedly planning for a star-studded wedding, but the duo refuted the reports.

However, a voice note shared by an Instagram blogger revealed a Kayamata seller and actress Omoborty cause the relationship between Dino and Iyabo to crash.

In the voice note, Iyabo Ojo was heard warning Dino Melaye to stop speaking negatively about her to Biodun Okewo.

Following Omoborty’s relationship with Dino Melaye, Iyabo Ojo who could not afford to share the politician with her colleague, vowed to stop seeing him.

The blogger wrote: He don happen like this o. Everywhere don scatter, that time when I been dey talk #yabdin matter Una think say i Dey lie,I tell Una say Dino collect my wife Una Dey use me laugh, now this is the confirmation say I no lie ontop Dino head o As God go butter my bread, God don make them fight,I can now have my wife.

I keep educating people on here,calm down you are doing well,no let anybody tension you on this gram one thing I like Dino about be say him share the house round. They are all Landladies,In the Voice note shared above you can hear Iyabo warning Dino to stop denying her and stop saying negative things about her to Miwa and Omorborty(his girlfriends)and vowed never to allow Dino knack am again Iyabo wey me dey keep, Dino don enter am anyhow well we meuveeee,

In the voice note that was shared to my source by Iyabo’s supposed bestie,you can hear her laughing out loud at the background and mocking her friend.Well enough said over the years,young entrepreneurs who are legit and striving,keep up the work,don’t be tensioned by anyone,even business owners ways no pure nowadays,just keep grinding,someday fortune will smile on y’all,I come in peace,Abeg if you be blog and you wan repost,Biko give me my deserved credit o,make bab wire no shock Una to death,igi ewedu oni wo pawa o.

Actress, Joke Jigan has taken to her official Instagram page to shade Omo Brish amidst her unending beef with her former bestfriend, Iyabo Ojo.

All the secrets Omo Brish leaked about Iyabo obviously did not go well with Joke and according to the mother of one, hypocrites are everywhere.

Reacting to these voicenotes, Fans and lovers of Iyabo Ojo stormed her comment section on Instagram to advice her to stay away from friends.

@barrister_dolapo wrote “Stay away from friends aunty iyabo. Omo brish has bern hating since day one. People should stop bashing iyabo Ojo . She is a single mother and she can date whoever she wants. Dino isn’t married rither”

@iam_rukkyjay wrote “The beautiful human by your side are your besties from today. Free friends and please do not go low with her let her remain there alone. It is well with us all”

@babyfresh2154 wrote “Ma I love you so so much from the very first day I set my eye on at igbogbo ikorodu, then I was small, Tosin is not your friend, E shora fun ORE, Tosin is a betrayer..what I saw on gistlover this morning broke my hrt so much.you don’t deserve it at all but worry less ma heaven will judge her big time.. note ma, you should be aware of all your friends… Tosin( Omobrish is bitter and envious of you) but I strongly believe you can’t be broken cos you’re a Rock and God is with you .I love you so much”