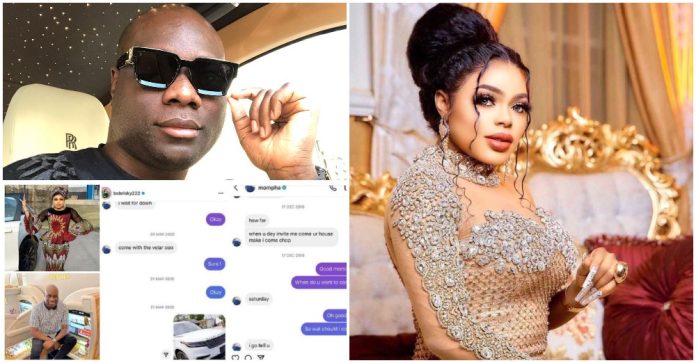 More dealings that happened in the past have been brought to the public as the online feud between Bobrisky and businessman Mompha continues to deepen.

This Bobrisky said as he shared old chats involving him and Mompha where the businessman had asked to use the crossdresser’s car.

Bobrisky said Mompha rents cars in Dubai for the gram

Bobrisky also narrated how after consenting to allow the businessman use his car, he would direct his driver to take it to the hotel where Mompha is lodged.

He accused Mompha of renting cars in Dubai for the gram and challenged him to come buy cars in Lagos if the businessman was financially buoyant.

Bobrisky also slammed Mompha for making him cook for him.

“You didn’t ask all your Lagos girlfriends to cook for you. I resemble your wife, abi. Next time you’re in Lagos you better fly your girlfriend come cos I’m not ready to cook for any audio billionaire.” 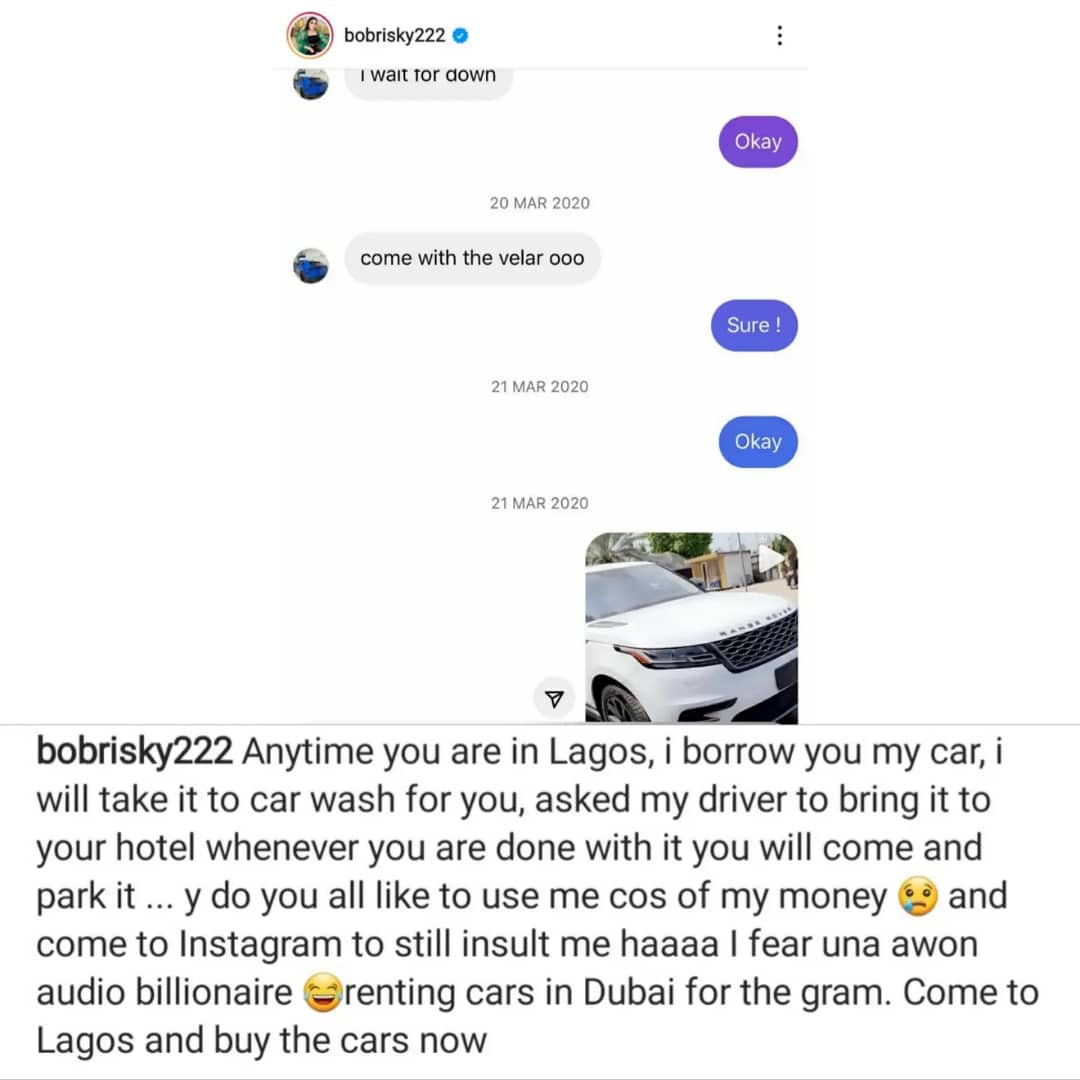 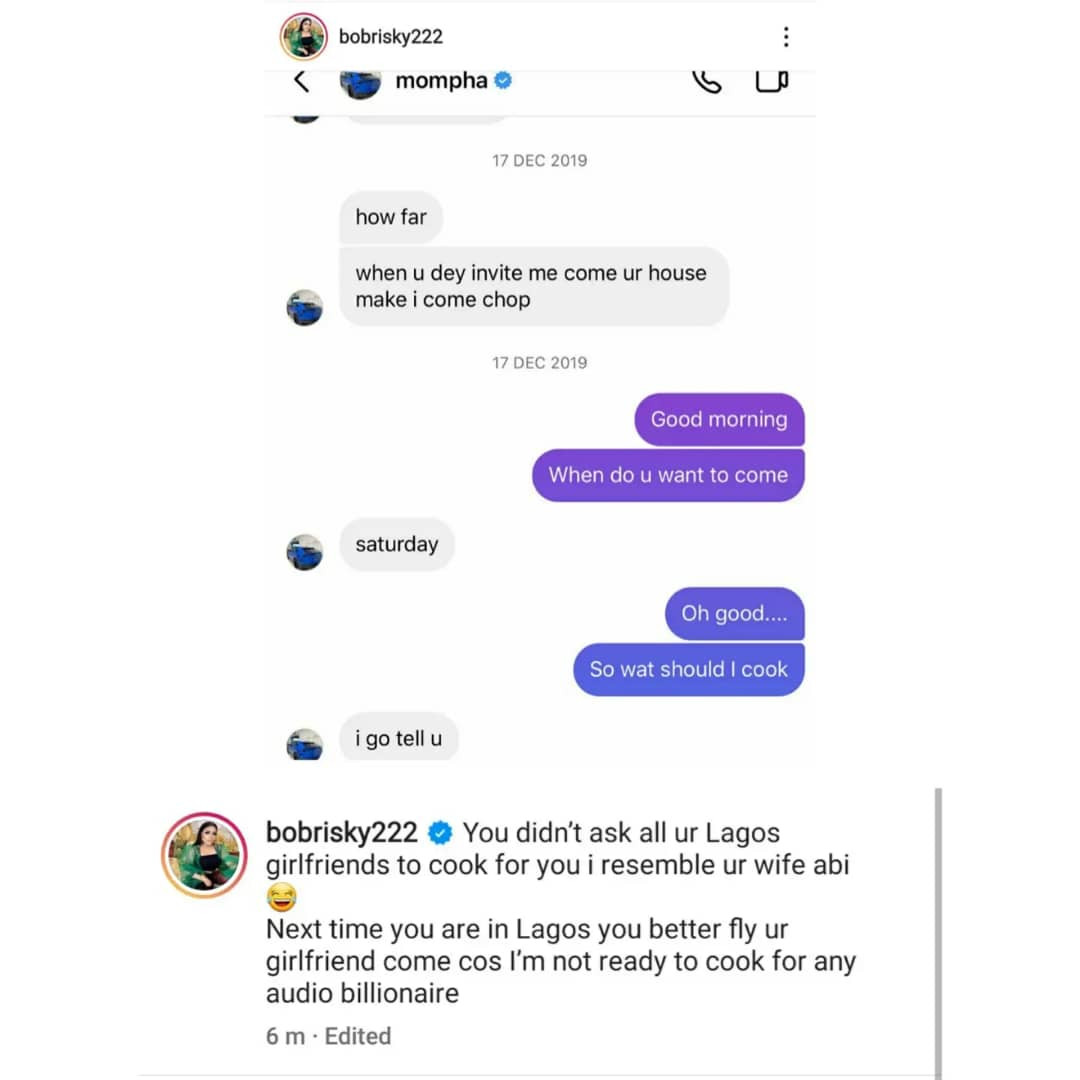 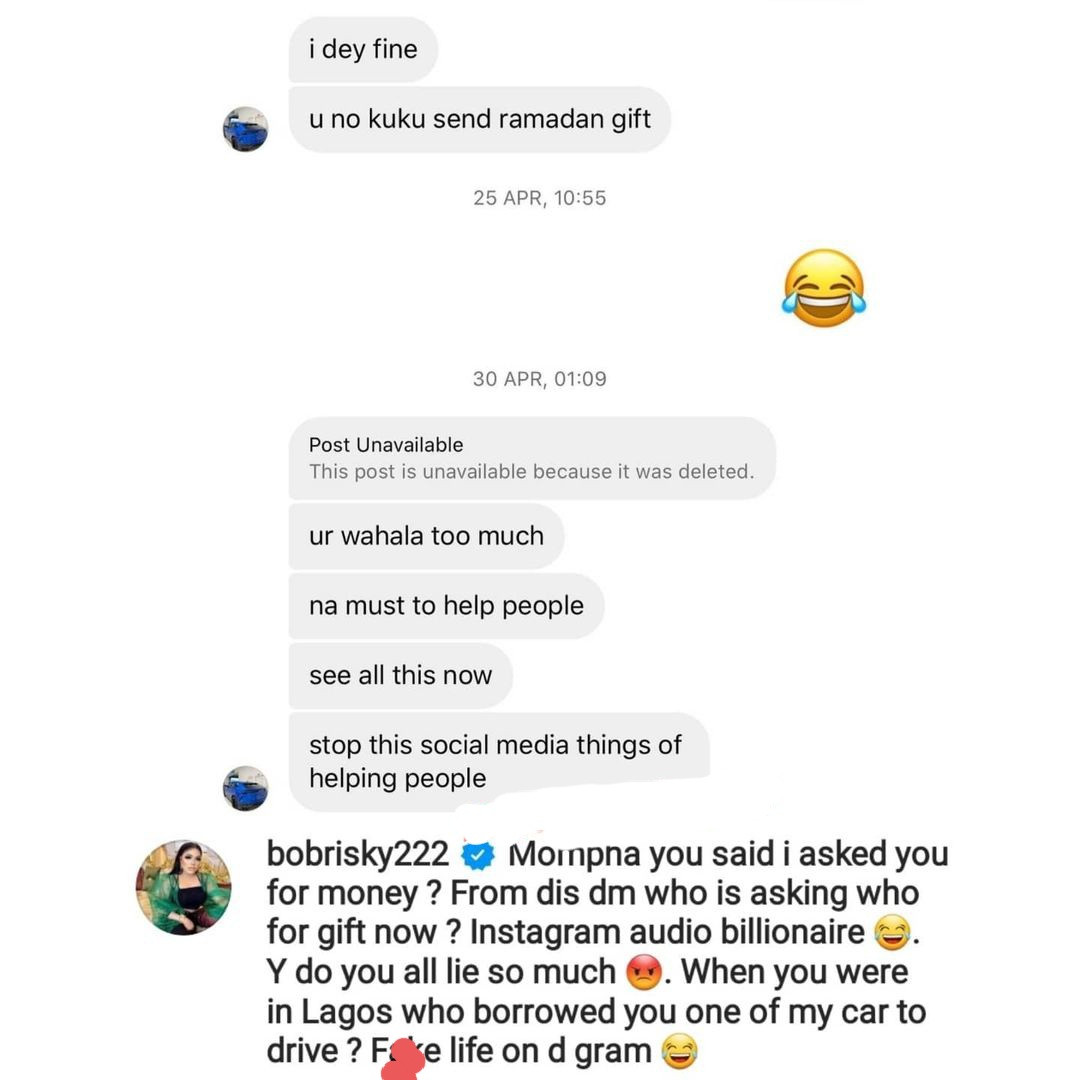 @dukeofhearts_ remarked: “If I don’t believe anything Bob has said I surely believe the part where they keep using him.”

@naijabeaux stated: “I said it! God see somebody huzzband ohh what else did he chop n use at bob’s? “

@____mepsky wrote: “I really dislike Bob but honestly i really feel most of these people are just using him, and since him own mouth no dey stay one place na him make them drag him left and right, but mompha is really childish and dumb, man no dey ever drag him na so so women, that’s how u know men who are pus*sies and womanizer’s.”

@ms_goldieanne stated: “Contentment, ite lorun, would have saved alot of people from unwarranted embarrassment. But no, they want to use what they don’t have or what they can’t afford.”

Recall Mompha took to his Instagram platform to warn Bobrisky to desist from messing up with his name.

He wrote, “My attention has been drawn to a statement credited to Idris Okuneye (aka “Bobrisky”), which is currently receiving traction across the social media. In the said statement, Bobrisky stated that I gave Tonto Dikeh the sum of N300,000.00 without his knowledge. I wish to state that this is not only untrue, but a deliberate attempt by Bobrisky, who is notorious for seeking attention through every means (including blackmail), to smear and ridicule my personality before the world. Rather, it was Bobrisky who informed me that Tonto Dikeh accused me of being too stingy, which I refuted as untrue.”

“The truth is that I only gave the sum of N300,000.00 to Tonto Dikeh for her foundation when she pleaded with me to support her pet project. It has however come to my knowledge that Bobrisky was actually at loggerheads with Tonto Dikeh, and resorted to use my name to discredit her before the general public. I want the general public to know that Tonto DIkeh is just a friend like every other friends I have both within and outside Nigeria, and there is nothing hidden in my friendship with Tonto Dikeh or anyone whatsoever.”

“Therefore, I am using this medium to sound a note of warning to Bobrisky, to desist from mentioning my name in any fight he might have with Tonto Dikeh or anyone whatsoever as he is not my friend and I do not waste my precious time on frivolities. Any further attempt by Bobrisky to drag me into his issues will be addressed by my lawyers in court. PS. I want it to be in the public that I, Ismail Mustapha, as a devoted Muslima and a family man have never and will never associate myself with gay people. My faith forbids it.”