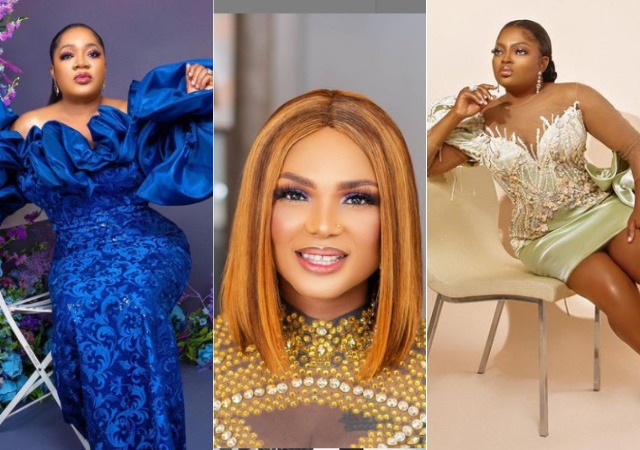 Netizens on the gram have gone agog after the heavyweights in Nollywood clashed over some misunderstanding.

Funke Akindele has been on the quiet after Iyabo Ojo called her out on social media for deliberately shunning Toyin’s movie poster, The Ghost and The Tout, and releasing her own movie, Omo Ghetto the Saga to clash with Toyin’s release date on Netflix. They both released their movies on September 10 and this caused some friction between them.

Eniola joined in the bandwagon as she jabbed Iyabo and indirectly asked her to learn from the positive sides of Funke who has since not replied to her backlash.

She wrote: “When People throw you stones, it is because you are a good tree full of fruits. They see a lot of harvest in you. Don’t go down to their level by throwing them back the stones, but throw them your fruits so the seeds of yourself may inspire them to change their ways”

Funke Akindele slid under the comment section on her close friend and side with her, She made it known that it is the first time she is making a sensible statement since she knew her.

The post sparked some mixed reactions from fans as they slid under the post and commented. Below are some reactions gathered.miwasignaturepalace_: Deep

maryremmynjoku: So if I stone you, you go gimme fruit for stoning you🤔🤔.
I dey pack stone come your your house then 🏃‍♀️🏃‍♀️

atfiirst: I know Someone must talk on someone behave we all have that Friend 🧘

alphabet_joy_boy: Diff between maturity and manuring 😂😂

hibee_wavy: Iyabo Ojo should catch her sub Ooo! 😂 Who God has blessed no man can curse #omoghettothesaga ✌️✌️💯🤍

kunlebarca: But some people ready to take all the fruits and leave the tree fruitless may God guide us from wicked people

elkanemp: You’re now funke spokeswoman, if you can mention name with full chest 😉