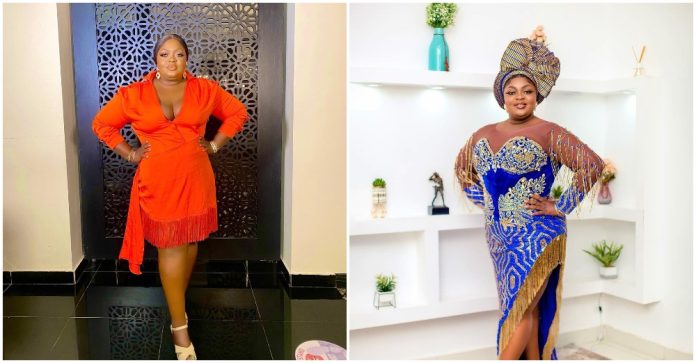 Nigerian actress Eniola Badmus is celebrating 20 years of being on stage. On December 9th, she plans on having a book launch in Lagos where she will celebrate this achievement with her friends, fans, and colleagues. Reflecting on her years in the industry, Eniola granted an interview with City People Magazine where she was asked not only about her career, but also about her weight loss that has everybody talking.

Speaking to City People, Eniola was asked: “How were you able to change in terms of your looks?”

“How were you able to lose so much weight?”

It is not easy. What I can say is it got to a point I could not control what I eat anymore. I eat anything so far it is edible, so from there I knew something fishy was going on. So far I have lost 33kg.

“What else has changed about you?”

I have other habits but I stopped even the one I thought I could not. I have one terrible habit that I am supposed to have stopped long time ago. This year a lot has changed about me, even I did not see this coming. As the year passed by I decided to change something.

“How do you deal with haters?”

This is another big thing, I don’t address because there is no point. I don’t see them even though I know them but I don’t want to give them that light. If you hate me then you have a problem because I can deal with everybody. On social what I think people don’t like about me is my stature so they say different things that has made me strong. With this, there is really nothing that bothers me, I do me and what I want at every point in time. Whether we like it or not, I am in the limelight and different things will happen and these are the things we know comes with our line of work.

“Spending 20 years on stage, what has life taught you?”

Firstly, life has taught me that you can be anything if you put your mind to it. Secondly, don’t look down on people. I remember when I started, a whole lot of people looked down on me telling me that I am too fat and all. At some point, I was given only armed robber roles. So with this I have learnt not to look down on people and to be helpful. Lastly, life has taught me that even if you are the top, biggest, ‘gbobo big girl’, be humble because you can be there today and it will be someone else tomorrow. That is why I mingle with Davido, Tiwa Savage, Reekado Banks, Olamide, CDQ and even the younger ones. I am not about being called “Aunty Eniola” just call me Eniola Badmus. Just like my elder brother who is over 60, he does not want to be called Chief, Mr and all of that. I like that, I am not Mrs, Miss just Eniola Badmus.

Congratulations Eniola on 20 years on stage! It has been a long and incredible journey definitely worth celebrating. These new pictures are also seriously banging.

What do you think about Eniola’s answers and her 20 years on stage? Let me know what you think by leaving a comment on my Facebook post.