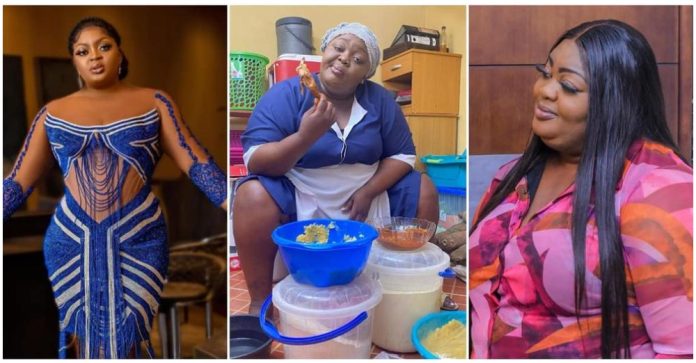 All roads led to the popular Monarch event centre in Lagos on December 9 for the #20YearsOnStage anniversary party of actress, Eniola Badmus.

However, the Omo Ghetto actress granted an interview to City People before the grand celebration and she had a lot to spill about her journey.

Eniola addressed the topic that has been on the minds of her fans and other observers who noticed the drastic change in her appearance.

Fielding a question about how she was able to achieve the transformation, the actress stated that it all stemmed from a decision she made.

Eniola said she was determined to surprise people who show up for her anniversary party with her beautiful transformation.

“In terms of my look, a lot has changed due to a decision made; anytime I decide to do this celebration I want to surprise everyone.”

She realised she had an eating problem

The movie star explained further that the change in appearance was necessary for herself and others because of the stigma and pressure she had experienced in the past.

On pulling off the major weight loss, the actress disclosed that it wasn’t an easy feat. Eniola said that she had an eating problem and couldn’t control her food intake.

The actress said she was always eating anything as long as it was edible.

“What I can say is it got to a point I could not control what I eat anymore. I eat anything so far it is edible, so from there I knew something fishy was going on. So far I have lost 33kg.”

Although the actress made no mention of it, there have been rumours that she reportedly had gastric bypass surgery to speed up her weight loss process.