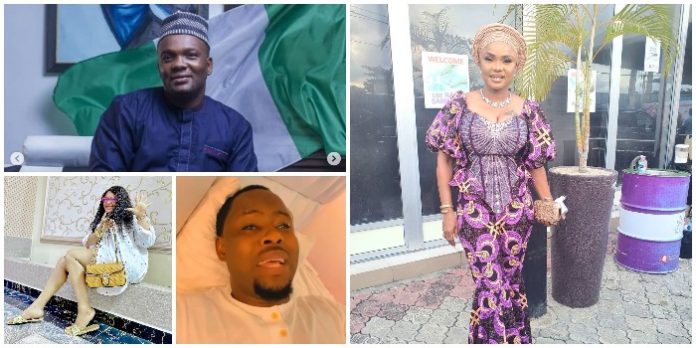 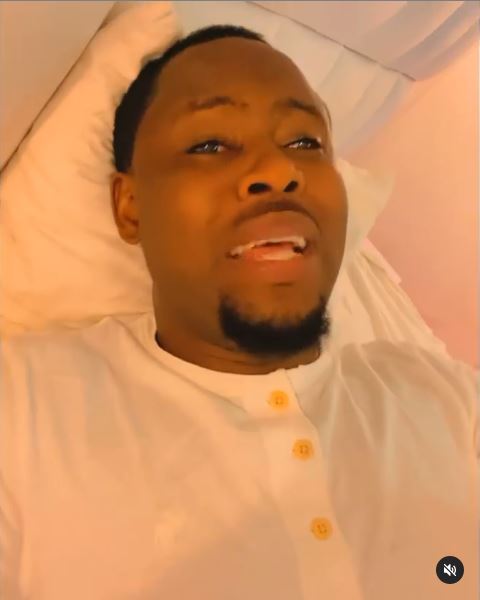 Tonto Dikeh shared a post on her Instagram page, saying Baba Ijesha must not be granted bail as the authorities concerned may want to twerk the law to his favour being a public figure.

Tonto Dikeh further urged her fans to tag relevant foreign and local authorities to ensure that justice prevails to serve as a deterrent to others. She also vowed to ensure that Baba Ijesha rot in jail.

Reacting to the outburst, Lege Miama blasted Tonto for insulting Yoruba Movie Industry, adding she has no right to condemn Baba Ijesha when there is no CCTV evidence where he was caught raping the minor.

Lege Miama further said there are still some discrepancies in the rape case as he cannot understand some issues surrounding the case.

In a lengthy post shared on his Instagram page, the actor said an association is investigating the matter to get the true picture of the event and act accordingly.

Yomi Fabiyi said many Nollywood stars are also careful about commenting on the issue, especially as the police statement mentioned CCTV footage which yet to be made public.

Yomi Fabiyi wrote: For those asking for my reaction and thinking I am silent because it involves one of us. That is untrue.

First and foremost, we belong to an association and they are investigating the matter in order to get the true picture of event and then act accordingly.

We are careful as individuals not to also comment because from the police statement, a CCTV footage was mentioned, the content not yet made public or seen by the representatives of our association or any close colleague to the best of my knowledge, the suspect has not been heard from directly or his representatives etc.

Lest we forget, many hurriedly condemned Baba Suwe on the drug issue due to the style of reportage, it was alleged he excreted 16wraps when NDLEA has no single pint of evidence from the day one of arrest or picture. We all know what happened after.

For many to cover up for their gaffes, some consoled themselves with narratives that he used jazz, some said he used connection etc. All these cannot help a society like ours. I hate to see innocent masses fight behind half-baked information or charades. The foundation of such society suffers, it raises horrible, uncivilised children and youths.

Except a clear cut open evidence, confession or trial with guilty verdict, it will be malicious and pre-mature for any or as colleagues to draw conclusions. Being famous come with a lot of responsibilities. Please understand and be patient.

Finally, child abuse, rape and sexual harassment are serious case and no artist or sane human being irrespective will condone or support such. However, it is better for majority in a society to be careful than sorry. I still have trust in the quality and honesty of our Detectives and Police Officers and will prosecute whoever is found on the other side of the law. My prayers and thoughts are with all concerned in this case.

Reacting to the allegation of rape, Nollywood actress, Biodun Okeowo took to her Instagram page to express her disappointment with the veteran Yoruba actor. She wrote:

“Please who has the footage where the disgusting, abominable and unimaginable act is being committed? Or at least his confession. I have some unused curses if he’s found guilty! This is hard to believe. Crestfallen is even an understatement… I’m emotionally shattered. Can’t wrap it off my head. If this is true, then Baba Ijesha disgraced us”, she wrote. 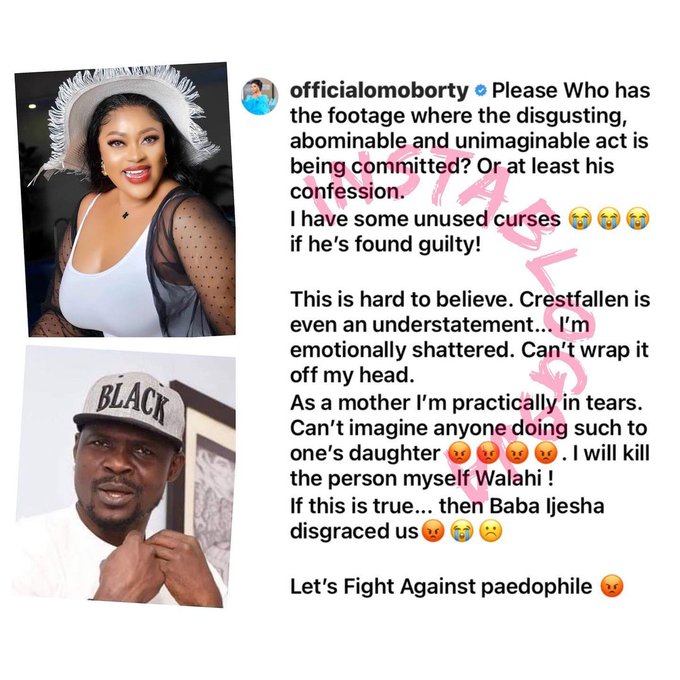 As different controversies continue to trail the alleged rape case of Nollywood actor Baba Ijesha, Iyabo Ojo issued a stern warning to her colleagues in the Yoruba movie industry.

Iyabo Ojo, in a video shared on his Instagram page, averred that nobody should defend Baba Ijesha without having a clear understanding of the case as rape is a sensitive issue.

To those demanding the release of the CCTV footage, Iyabo Ojo questioned that as a mother, how would they feel when a video of their child being molested is circulating the social media.

The actress added that Baba Ijesha should not be defended but allowed to face the full wrath of the law if found guilty of the crime.

Iyabo Ojo captioned the video: please let’s be mindful in my industry. this is a very sensitive issue & we should all remember that a 14years old child is involved……. she is watching the Internet, if you can’t support or help her don’t hurt her the more…. Thank You