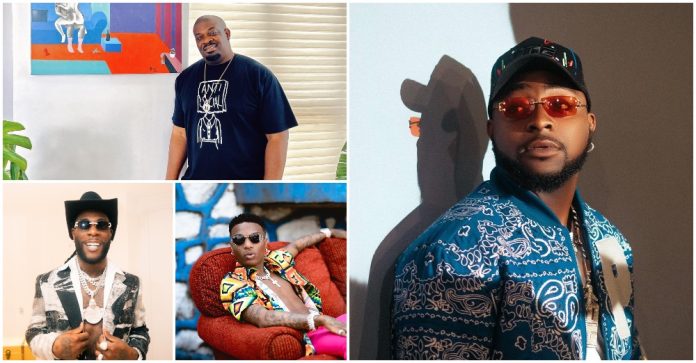 To be classified as a successful artist anywhere in the world is not only about the amount of music you make, your streams, strong fan base, endorsement deals, partnerships, and enviable awards shelve formed what makes one a big star.

Nigeria has been blessed with music stars that have incredibly achieved most of the things listed above and are still doing well with their other businesses.

In this article, we took a look at 10 Nigerian music superstars who have earned so much in 2021 and are topping the music rich list according to Forbes rating.

Don’t be decided by the lyrics, “30 billion for the account” Davido topped the list of richest music stars in Nigeria, he might be worth more due to his family background but according to Forbes, his net worth in 2021 is 24 billion naira.

The Risky crooner has signed major endorsement deals in the year and released quality music which would have automatically earned him money.

The Starboy as fondly called by his fans is worth a staggering 18 billion naira as of the year 2021.

Wizkid had a successful year with his Made in Lagos deluxe album making waves across the world and giving him more international recognition.

The self-acclaimed African giant comes third in the rich list with a net worth of over 10 billion naira.

Burna Boy had a successful year as well in terms of sold-out concerts in different parts of the world.

The Mavin record boss comes in at number 5 in the Nigerian music rich list.

Don Jazzy is worth over 10 billion naira, he has carved a niche for himself as one of the biggest influencers in the Nigerian social media space.

According to Forbes, veteran Nigerian music star, 2Baba Idibia is worth a staggering 9.6 billion naira, there was a time the singer was topping the rich list chat beating several of his contemporaries.

But he has calmed down a bit giving the new school guys their time to shine.

The YBNL boss is occupying the 6th position on the list, the singer explored the international market in 2021 and he is thriving big time there.

He is worth 8.4 billion naira as an artist.

Olamide’s bestie, Phyno occupied the number 7 spot on the rich list as he is worth the sum of N6.6 billion naira.

Timaya occupied the number 9 position with a net worth of N6,3 billion naira, Timaya who has blessed his fans with several hits lasted so many years in the music business.

He is one of the musicians that loves living a private low key life.

Flavour Nbania occupied the number 9 spot with a networth of 5.7 billion naira, he also had a successful year musically with his hit single, Levels.

Tiwa Savage is the only lady that made it to the top 10 in the rich list.

The Somebody Son crooner’s net worth is estimated to be around 5.4 billion naira.