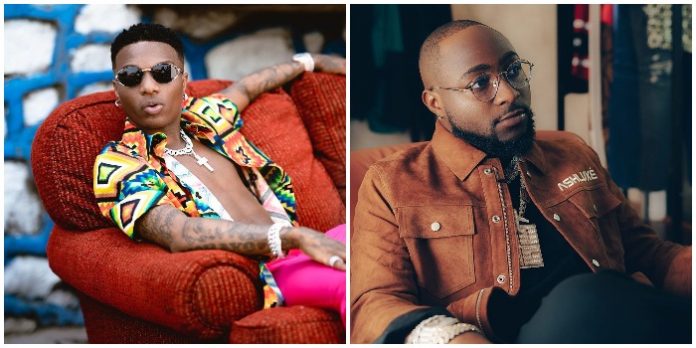 A video of Wizkid vibing to Davido‘s song while enjoying himself with his friends as part of his 10th anniversary has gone viral and Davido has got every wondering after sharing it.

Wizkid was singing and vibing to Davido‘s verse on a song and Davido in return showed some love to him by sharing it on his InstaStory to appreciate Wizkid for vibing to his song.

Another video also sees Davido vibing to Wizkid‘s song also surfaced on the net and netizens have been wondering if they are now cool or they have been friends in disguise all this while.

Wizkid and Davido seem to be fond of each other but it appears their fans are the ones trying to create a rift between them and they haven’t allowed that since they have been spotted vibing to each other’s song despite the differences.

This video of Wizkid and Davido vibing to each other’s song on different occasions is a lesson to their fans who are always trying to create problems for themselves by insulting and attacking each other when their favorites are fond of each other.

Wizkid and Davido have a very huge fanbase and after this video of the two vibing to each other’s song hit the net, some netizens are asking whether there can be a collaboration between the two since they’ve shown they aren’t enemies.

Below are some reactions from fans ;

lizdarmmy wrote ; Davido is so in love with my baby

misschidel wrote ; I love wizkid 😍😍😍but since my baby is jamming to frog voice music, then I love him too😂

callmewyzee wrote ; My dream of wizz and davido In a song coming through