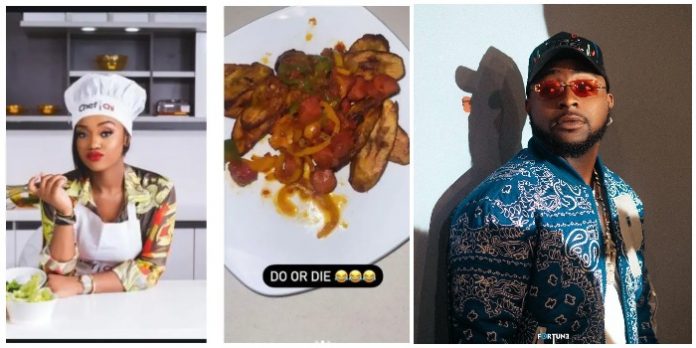 Davido, in a video shared on his Instagram story, is seen cooking his favourite dish, which is also his late mother’s recipe, ‘plantain and spicy hot dog stew.

After preparing and eating the food, the singer shared a photo of an empty plate, saying he’s full. Reacting, social media users said he learnt the cooking skills from his fourth babymama, Chef Chi as she taught him well.

However, others said he’s currently missing Chioma, and her special delicacies urged him to apologize to her.

Recalls that at the 26th birthday celebration of Chioma, Davido’s cousin Clark Adeleke had advised Chioma to overlook some of the drama put up by Davido on social media as he still loves and appreciate her.

In his word; “I don’t know if you are going to be angry, but I am going to say this, no matter what happens between you and my brother, he loves and appreciates you.

He continued, “You were friends before anything and remember you have a beautiful son together.”

sparkle_looks wrote: He has learnt from Chioma na

sympathy533 wrote: We know where he got the talent From

belemastowe wrote: Go and beg chef chi to come and cook for you o